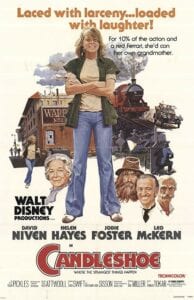 Hustler Harry Bundage (Leo McKer) comes into the possession of a will belonging to the now-deceased husband of Lady St. Edmund (Helen Hayes). Learning he hid the treasure of an old pirate named Captain Joshua somewhere in his mansion, Bundage decides to steal it. He kidnaps the juvenile delinquent, Casey Brown (Jodie Foster), in Los Angeles, CA to set in motion his plan to get that booty. He bribes Casey is to convince Lady St. Edmund she is her long-lost granddaughter who was kidnapped as a toddler in LA years ago.

Once accepted into her home, Casey will have free range to look for clues to the location of the treasure. However, Lady St. Edmund is now out of money, and time is running out for her. Her butler Priory (David Niven) and some orphans that live with her do their best to keep the home from her creditors. Soon, Casey turns against Bundage to find the treasure so the mansion will be saved, and everyone can live happily ever after.

Norman Tokar, known for Disney gems as The Ugly Dachshund (1966), Where the Red Fern Grows (1974), The Apple Dumpling Gang (1975), The Cat from Outer Space (1978), and a little TV show called Leave it to Beaver directed the film. When you look back at family films from the 1960s and 70s, the two names that always come to my mind are Walt Disney and Norman Tokar. Unfortunately, Tokar’s his sudden death in April of 1979 of a heart attack ended the era of this type of charming Disney film.

The three principle actors in Candleshoe are Jodie Foster, Helen Hayes, and David Niven. Leo McKer and Vivian Pickles are the film’s villains, while Veronica Quilligan, Ian Sharrock, Sarah Tamakuni, and David Samuels play the four orphans at the mansion.

Candleshoe is the final of four cinema released films that Jodie Foster made with the Walt Disney Pictures in the 1970s; including Napoleon and Samantha (1972), One Little Indian (1973), and Freaky Friday (1976). In many ways, Casey is a very toned down version of Iris “Easy” Steensma, the child prostitute she played in 1976’s Taxi Driver that got her an Oscar nomination for best supporting actress. Foster’s transition from the tough orphan at the beginning of the film to tearful teen-aged girl with a family at the end shows her emotional range that made her the top child actor of the 1970s. Her performance is just as believable today as it was back then.

However, Jody isn’t the only outstanding actor in the film, and while she is just at the beginning of her career, she plays against a woman at the end of hers. Candleshoe is the final of three cinema movies that Helen Hayes made for the Walt Disney Pictures in the 1970s; including Herbie Rides Again (1974) and One of Our Dinosaurs Is Missing (1975). It is also the final cinema movie she ever made. Her only few acting appearances after this are on television. As Lady St. Edmund, you are lead to believe she’s an out-of-touch old woman possibly with some dementia, but really she still has her wits about her. Hayes’ performance in this film is both charming and dignified, even for the silliness going on around her.

David Niven is the real workhorse in this film playing not only his main role of butler as Priory, but also as Lady St. Edmund’s gardener, Gipping; her chauffeur, John Henry; and neighborhood friend, Colonel Dennis all in the name of keeping her ladyship happy against the stark reality that she is in fact penniless. My childhood memories of David Niven are as Priory from this film, James Bond, in that terrible Casino Royale movie; as Phileas Fogg in Around the World in 80 Days; and Sir Charles Lytton, the notorious Phantom, in The Pink Panther. He is not afraid to be absurd in his roles, and still be taken seriously. Watching him ride that horse as Colonel Dennis never fails to entertain me.

As for the other actors in the film, Leo McKer plays a great 1970s Disney villain, however, Vivian Pickles as his cousin Clara Grimsworthy is a miss. She really didn’t have much to do in the film, and wasn’t needed in my opinion.

Veronica Quilligan, Ian Sharrock, Sarah Tamakuni, and David Samuels play your typical Disney orphans, and while they do a fine job, you can really see how exceptional Jody Foster is as actor when acting next to children her same relative age. She stands out far above them.

They also capturing a bit of the 1970s kung fu craze. Sarah Tamakuni, who is Asian, takes a martial arts stance against Casey, complete with the proper music, during the girl fight in this movie; very dated by today’s standards.

There isn’t anything exceptional with the cinematography in this film. It is a standard, but solid film production. Filmed mostly at Pinewood Studios in Buckinghamshire, England, this definitely has an “in studio” feel to it. I did enjoy seeing the 1970s English countryside, and very much liked the 1970’s Los Angeles film locations.

Compton Wynyates, in Warwickshire, the home of Spencer, 7th Marquess of Northampton, was used as the fictional estate of Candleshoe. Also, the Severn Valley Railway which runs between Bridgnorth and Kidderminister was used for the charming train station in the film.

Once again, the soundtrack of a film is not something that ever really sticks out to me. So if I don’t notice it, that’s a win in my book. Grimsworthy plays a bit of the English folk song, Greensleeves on the piano, and it is later heard on Margaret’s music box. We are also treated to Yo Ho (A Pirate’s Life for Me) throughout the film to add to the Disney pirate theme.

Candleshoe is a nostalgic staple from my childhood that I originally saw in the movie theater back in the day, and at least a hundred times on the Disney Channel. While the story is a bit silly and dated, forty years later, this is still a classic 1970s Disney film that I look back at fondly. Sure, Leo McKern’s Harry Bundage is the classic one-dimensional, mustache-twirling bag guy, but Jodie Foster, David Niven, and Helen Hayes make up for it with solid performances. This is a film that will be fun for the whole family.