A megalomaniac CEO sends his son into the African Congo to retrieve a source of diamonds large and pure enough to function as powerful laser weapon. However, when he loses contact of his son and team, he sends his would-be daughter-in-law in after him with a shit-ton of high-tech gadgets, and rag-tag team members. Once there, they quickly learn that in order to rescue her former fiancé, they must make difficult sacrifices along the way. 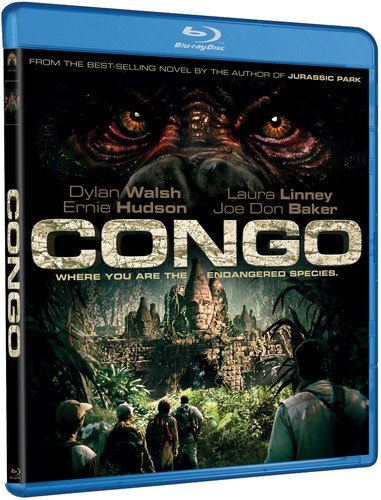 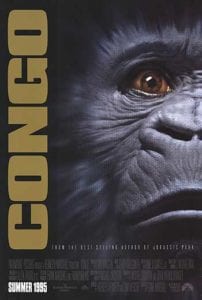 Congo begins when Charles Travis leads TraviCom employees through a remote part of the Congo jungle in search of rare blue diamonds. Travis’ father plans to use the diamonds in his communications satellite in hopes the gems will make the company front runners in laser based communication.

Shortly after Charles transmits his findings across the globe to fellow TraviCom researcher (and one-time lover), Karen Ross, one of the members of the expedition leads him to the mysterious the ruins of The Lost City of Zinj.

However, an equally mysterious animal viciously slaughters the two inside the city, and then destroys TraviCom’s communication equipment. Karen sees the camp’s destruction via satellite, and she asks TraviCom’s owner to fund a rescue mission…and of course, he wants the rare blue diamonds too.

Meanwhile, over at UC Berkeley, Peter Elliott completes his work teaching a gorilla named Amy to use sign language. Whatever Amy signs,  a Nintendo Power Glove translates her motions to English.

Although successful, Peter realizes Amy wants to return home to her native Congo. While he tries to get Amy back there using his research finds, a shady Romanian philanthropist with no money named Herkermer Homolka steps up to fund their trip.

On the day they leave, while out on the tarmac, Peter learns there isn’t any money to pay for the fuel to leave. Luckily for him, Karen is there and finances the expedition herself, BUT she and her TraviCom team must join them…or vice versa for some odd writing reason.

Once the group arrives in Africa, Captain Munro Kelly, their guide, greets them. Unfortunately, while still at the airport, Captain Wanta’s militia captures the group, and only releases them after a substantial bribe.

As they get ready to head out to the jungle, Munro finally recognizes why Homolka looks so familiar. He outs him as an incompetent conman who failed numerous times to locate The Lost City of Zinj. Homolka admits to searching for the city, but he’s no conman.

On board the plane we learn Amy feels threatened when Karen Ross gets near Peter, and she insults her with her Power Glove as they prepare to take off. However, this flight is short. Soon after departing, Zairean soldiers shoot the plane from the sky. Everyone must parachute into the jungle to survive.

On the ground, the survivors encounter a native Ghost Tribe. The tribe leads them to a catatonic white man who turns out to be a member of Charles’ missing expedition. The man only snaps out of this state when he catches a glimpse of Amy. He starts screaming, and then keels over and dies.

The adventure continues on by boat, and Homolka admits to searching for the city for a long, long time. Based on Amy’s drawings she created back at Berkely, he believes Amy knows where city is located, and he now wants her to guide them.

Some hungry, hungry hippos capsize the boat, and the team swims to shore. The journey continues on, and they soon stumble upon Charles’ destroyed base camp. Coincidentally, The Lost City of Zinj is nearby.

The start a search of the city, but when a grey gorilla kills two men in the group, the all flee the city. They return to the destroyed camp, and set up a perimeter with automated machine guns. During the night, the gorillas repeatedly test the guns which barely save the remaining members.

The next day, they return to the city, and discover hieroglyphics that show these gorillas were taught to guard the city, and kill all who enter it. While the old miners are long since gone, the gorillas still protect the city, and its mine.

They continue further into the city, and eventually find the diamond mine. As Homolka collects large diamonds on the ground, a pack of gorillas tear him apart, and the place goes apeshit.

Munro, Karen, Peter, and team must now fight off all the gorillas. The find themselves deep into the mine, and discover Charles’ body with a giant blue diamond. Amy shows up to save Peter, and fight off the gorillas.

This gives Karen enough time to retrofit the blue diamond to a portable laser; giving it enough power to use it as a weapon to kill the apes. Conveniently, the volcano the city is built near erupts, and Munro, Karen, Peter and Amy flee to safety. The lava flow destroys the city and the gorillas guarding it.

Now safe, Karen contacts TraviCom to report the deaths of everyone on the previous expedition, and on finding the blue diamond. However she quickly learns Travis, TraviCom’s CEO, only cares about the diamond, and doesn’t care about Charles, his only son’s death. So she destroys TraviCom’s satellite with her new blue diamond laser in anger.

In the nearby wreckage of another cargo plane that was shot out of the sky, Karen finds find a hot-air balloon, and Munro, Karen, and Peter prepare to leave. Amy joins a group of good gorillas and head off to a new life. Peter tells Amy goodbye, and the survivors float away in the balloon. Karen asks Peter to throw away the diamond over the jungle to a happy ending…that is unless Zairean soldiers shoot it out of the sky as well. There’s no way they’d see a big yellow balloon in broad daylight is there?