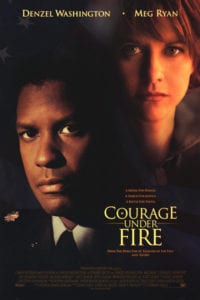 Solid war movie in the vein of “Rashomon”

This is one of those war movies where you feel how difficult it is to be a soldier in the middle of a war zone with bravery, cowardice, confusion, orders, and emotional turmoil taking it’s toll on the human psyche while yours and your fellow soldiers’ lives are perilously hanging in the balance during the first Gulf War. Showing why he is such a classy military actor, Colonel Denzel Washington encapsulates the emotional baggage of being participant as commander of a tank battalion that pulled the trigger in a “friendly-fire” scenario that continues to haunt him when he gets stateside.

The PTSD and media backlash has pushed him to near-alcoholism as he is reassigned to basically rubber-stamp the posthumous Medal of Honor intended for the first female to receive the award for heroics in wartime. What transpires, however, is anything but a slam-dunk for the war-worn commander.

There are two stories running simultaneously throughout the picture. The first – Denzel as commander of the tank battalion – is dark and understandably confusing. This lends itself to the realism and confusion of actual warfare where warriors are expected to determine friend vs. enemy at night while looking through infrared scopes while under intense fire. It is a daunting, and sometimes overwhelming, task to command.

The other story is of a heroic helicopter crew, led by Major Meg Ryan as the pilot, who goes down while trying to protect another downed chopper crew. Over the course of the next 24 hours, the heroes come to terms with who they are under intense enemy fire. What starts out as a clear-cut “give her the medal because the President and our government needs a female hero” turns into a genuine mystery as to whether the pilot truly deserves it or not.

There is very little difficulty separating the two stories. What becomes more complicated is how Denzel’s character must overcome his own demons in order to objectively give America’s most important wartime medal to a deserving/undeserving member of the service. Whether it would be the first female to be awarded this prestigious medal is irrelevant. It is right vs. wrong with a very important military mystery blocking Denzel’s path to the easy path of just giving it to her.

This is a clever “did she/didn’t she” narrative with sides changing their story at nearly every turn. Since there are so few witnesses under intense enemy fire, it’s basically one soldier’s word vs. another’s – and who is telling the truth when one of them is dead. It also is the story of redemption for two very classy, honorable soldiers who deserve more from their country – and their other brothers in arms. Denzel has done this character before, which also makes him a perfect fit for the tortured commander who wants to do the right thing against the powers that be. Meg Ryan was surprisingly excellent at portraying a character who, through the stories changing multiple times, must be both heroic, cowardly, and still maintain dignity and honor in the face of overwhelming odds. It’s fairly inspirational stuff.

This may not be the best war movie ever made. However, I believe it is definitely worth watching as a night’s entertainment. I would place it on the same, well-done, stereotype-shattering heroic level as “Men of Honor”. Well cast, well acted, and well done. 8 out of 10.

A U.S. Army officer, despondent about a deadly mistake he made, investigates a female chopper commander's worthiness for the Medal of Honor.