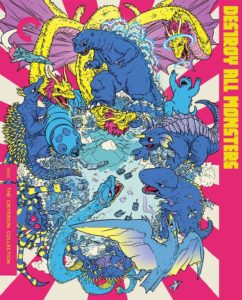 Years after the events in Son of Godzilla, humankind has captured and collected all the monsters of the world onto a remote island known as Monster Island. Located in the Ogasawara island chain, the island contains a special control center that members of the United Nations Science Committee (UNSC) use to monitor the monsters on the island. The scientists ensure that the monsters stay secure on the island so that they can study them.

The scientists on the island are mysteriously attacked and gassed by an unknown group of assailants. As a result, the rest of the world loses contact with Monster Island. Shortly afterwards, the monsters from the island begin attacking the world’s capitals. Dr. Yoshida (Jun Tazaki) of the UNSC dispatches Captain Katsuo Yamabe (Akira Kubo) from the UNSC’s moon base. Katsuo and his crew fly back to Earth on their spaceship Moonlight SY-3 to investigate what happened on the island. Once on the island, Katsuo discovers that the scientists, who are led by Dr. Otani (Yoshio Tsuchiya), are being mind controlled by an alien race called the Kilaaks. The Kilaaks reveal that they are in control of the monsters. The Kilaak Queen (Kyoko Ai) demands that humankind surrender or the Kilaaks will use the monsters to destroy humanity.

The human race refuses to surrender, so the monsters continue to attack. Godzilla attacks New York City while Rodan devastates Moscow. Gorosaurus destroys Paris while Mothra leaves Beijing a wasteland. The attacks are a distraction to keep military forces away from Japan where the Kilaaks are attempting to establish an underground stronghold near Mount Fuji.

I didn’t think Tokyo would escape this terror, but Rodan, Godzilla and Manda are all here at the same time. General Sugiyama Tada (Yoshibumi Tajima)

The Kilaaks unleash their next attack on Tokyo with a group of monsters all attacking at once. However, the UNSC discover that the Kilaaks are luring the monsters to Tokyo using mind-control devices and dampen the effect on the monsters. The Kilaaks switch to using their mind control device from their base under the Moon’s surface.

Katsuo leads his crew and their ship to the moon to destroy the Kilaaks’ base. They are successful although they discover that the Kilaaks need extreme heat to survive. With the base destroyed, UNSC regains control of the monsters again. The Kilaaks retaliate by summoning King Ghidorah, the three headed space monster, to Earth to destroy humanity and to protect the remaining Kilaak forces hidden under Mount Fuji. Godzilla, Minilla, Mothra, Rodan, Anguirus, Gorosaurus, and Kumonga unite to fight Ghidorah. The space monster is overpowered by the combined monster forces and is eventually killed.

The desperate Kilaaks unleash their last weapon which is a burning monster called the Fire Dragon. The Fire Dragon creates devastation throughout Tokyo and destroys the UNSC base on Monster Island. Surprisingly, Godzilla attacks Mount Fuji and the Kilaaks’ underground base. At the same time, Katsuo pursues the Fire Dragon in his SY-3 spaceship. He discovers the Fire Dragon is really a Kilaak ship. The Kilaak ship is destroyed, which ends the alien threat to the Earth. Godzilla and the other monsters return to Monster Island and once again live in peace and tranquility.