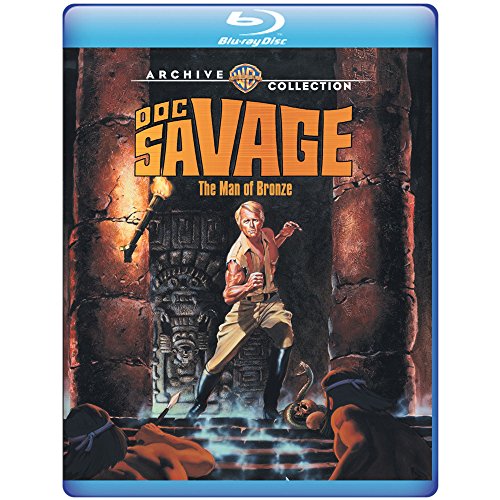 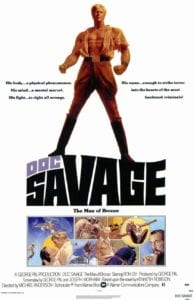 Doc Savage: The Man of Bronze takes place in 1936. We find our hero returning to New York City after a relaxing visit at his refuge in the Arctic called the Fortress of Solitude. Yes, DC Comics blatantly ripped off the name for their Superman’s stories FIVE years after its first appearance in the Doc Savage universe. Once home, Doc learns that his father has died while exploring the remote interior of the Central American Republic of Hidalgo, and the circumstances for his death are a bit suspicious.

As he sorts through many of his father’s personal memoirs delivered to him, a sniper tries to assassinate him through the roof-top window. He misses thanks to a specially crafted window that refracts a person’s image a few inches; rendering the assassin’s aim ineffective.

Doc takes chase, and he corners the sniper a top the Eastern Cranmoor Building nearby. The assassin slips and falls to his death. Doc gives the man a thorough examination, and finds him to be a Native American man with red fingertips possibly dipped in blood. His chest has a likeness of the ancient Mayan god Kukulkan tattooed into it.

Doc returns back to his penthouse to find vandals have now destroyed all his father’s personal memoirs he was just looking at. With his suspicions high, Doc vows to find out how and why his father died. He assembles The Fabulous Five, his team of male companions that have dedicated their lives to traveling around the world to fight for justice, and they all head to Hildago.

Meanwhile, international criminal and smuggler Captain Seas waits for Savage and his men to arrive so he can kill them all. This culminates in a large brawl a board his yacht, the Seven Seas, which Doc and team win, but the Captain escapes from.

We learn that years ago, the Quetzamal, a Mayan tribe that disappeared about 500 years ago granted Doc’s father, Professor Savage, a substantial amount of land in the unexplored interior of Hidalgo. Unfortunately, according to local official Don Rubio Gorro, all records of the land transaction have disappeared. Gorro’s assistant, Mona Flores sets out to help Doc recover those papers because she saw the original papers, and knows more than she’s telling. She leads Doc and his team into the jungle to find the Quetzamal.

Luckily for Doc, his father left some clues to the hidden entrance into the valley where the lost tribe lives. After Doc winds up separated from his boys, he finds a pool of molten gold. He also sees that Captain Seas is there, and he’s using the Quetzamal natives as slave labor to take all the gold for himself.

Nearby, Seas’ men find and capture Mona and The Fabulous Five. Once he has them trapped, he unleashes the Green Death in their general direction. This is the same airborne virus that killed Doc’s father, and allows Seas to control the Quetzamal people.

However, Doc is one strong man, and he overpowers the Captain. He forces Seas to release everyone so he can administer his special antidote he made to them all. With Seas under arrest, his men try to escape with any gold they can. Unfortunately, some dynamite they had explodes which causes the pool of gold to erupt. It covers them all, Don Rubio Gorro included, in molten metal.

Now free from Captain Seas’s spell, Chief Chaac offers Doc the gold and land. Doc accepts with the promise “…to continue my father’s work…with this limitless wealth at my disposal, I shall be able to devote my life to the cause of justice.”

Doc Savage returns home to the United States with Captain Seas in tow. There, he performs brain surgery on the good Captain to cure him of any criminal thoughts. We fast forward to the Christmas season where Doc is out shopping. When he runs into Seas, he’s working as a bandleader for The Salvation Army with some lovely ladies. He’s now docile and as reformed as can be.

Once Doc returns to his penthouse, he hears an urgent message recorded on his telephone’s answering machine while he was out. There is a new threat out there that could cost millions of people’s lives. Doc speeds off to his next adventure…the sequel that will never come.