Donovan’s Reef takes place on the French Polynesian island of Haleakaloha. Michael ‘Guns’ Donovan, Thomas ‘Boats’ Gilhooley, and Dr. William Dedham are old World War II navy buddies that have made the island their post-war paradise. Donovan’s Reef is the town’s watering hole where bragging, brawling, and full-blown mischief are the norm. However, the sudden arrival of Elizabeth Allen, a straight-laced Boston blue blood brings more turmoil than to the island than any of their barroom fisticuffs. Seeking the whereabouts of her long-estranged father, Elizabeth must confirm that her father is not of good moral character. Then she can assume control of her family’s shipping dynasty back home in the United States. 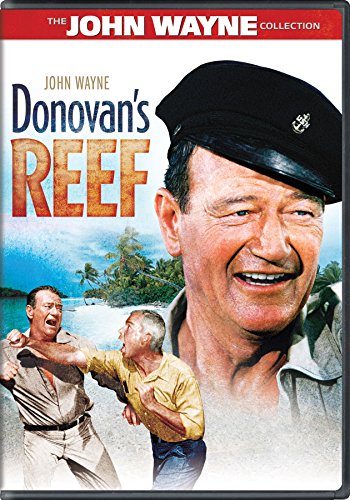 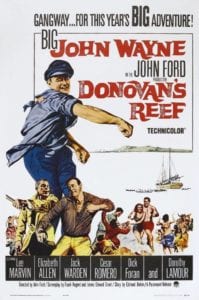 Donovan’s Reef begins with Navy veteran, “Boats” Gilhooley, jumping ship as it passes his adopted home of Haleakaloha in the French Polynesian Islands during the Christmas season. The water logged Santa Claus is seeking to give a “gift” in the form of a roundhouse punch to his best friend from the Navy, Michael “Guns” Donovan (John Wayne). Guns also lives on the small island and is returning from a fishing trip where he is met by their mutual expatriate/friend, William “Doc” Dedham.

The three men had set up shop on the island after the war. Doc is the only physician on the island and takes care of the native’s medical needs while raising his three children that he fathered with the island’s former princess. The children’s mother died during childbirth years before and Doc has been raising them with the help of Guns and the other islanders.

Gilhooley arrives on the island on his birthday, which he also shares with Guns. The two men have a tradition going back over two decades where they have a knock-down, drag-out fight on that day to celebrate their birth. The fight is broken up by Doc who points out the ridiculousness of the fight, and asks what the two men have been fighting about over the decades, to which neither man has a clear answer.

After their big fight, the two men make nice with each other, and we learn that Doc is about to leave for a few weeks to take care of some of the islands on the outskirts of the Polynesian Islands. As it so happens, the Doc’s estranged daughter, Amelia Dedham, arrives right after he leaves.

Amelia is on the island to get evidence that Doc Dedham is living an immoral life which would break an outdated, but still enforced, morality clause that will keep him from collecting on his stock inheritance. The inheritance would give Doc majority control of the family’s business, which Amelia wants to prevent.

When Guns finds out about Amelia’s arrival, he, Gilhooley, and Haleakaloha’s French governor, the suave, Marquis de Lage, come up with a plan to pass off the Doc’s “hapa” children as Gun’s. The oldest child, Leilani, is devastated about having to live out the deception, and would love to meet and acknowledge her older half-sister. However, Guns and de Lage convince her to go along with the plan.

Along the way, Amelia falls in love with Guns and the kids. Once Doc Dedham does return from his trip, Amelia learns the truth that not only are the children his, but that he is a great man that has helped the people of the island for years. Far from finding the immoral man she thought her father was, Amelia finds a caring man that she is proud to call dad.

The film ends with the biggest happy ending ever. Amelia gets her father back, three new siblings, a husband, and all the stock she needs for control of her family’s business. Gilhooley marries his longtime girlfriend and becomes the owner of the bar, Donovan’s Reef. All seems right in the world…until next Christmas, when Gilhooley and Guns will duke it out to the delight of the locals.