In Dr. Strangelove, when the U.S. Air Force General, Jack Ripper, goes mad, he orders his bomber wing to destroy the Soviet Union. He suspects that the communists are conspiring to pollute the precious bodily fluids of the American people. As the U.S. president meets with his advisors, the Soviet ambassador tells him that if nuclear weapons hit them, the assault will trigger their Doomsday Machine; thus destroying all plant and animal life on Earth. Now, it’s a rush against time as clashing personalities play a sinister game of Chess with innocent lives in the balance. 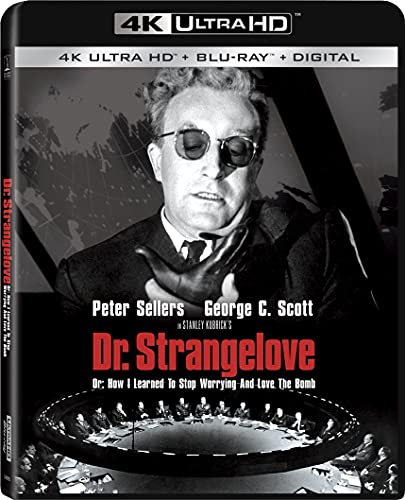 Dr. Strangelove Or: How I Learned to Stop Worrying and Love the Bomb [4K UHD] 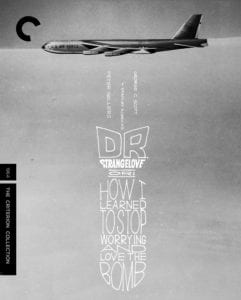 Dr. Strangelove begins with Jack D. Ripper, an Air Force General with his finger on the button and a head full of conspiracies. Using a special attack plan—Wing Attack Plan R—reserved for retaliation against the Russians should they take the White House out, Ripper launches a preemptive nuclear attack on the Soviets.

General Ripper’s executive officer, British officer Captain Lionel Mandrake, tries to reason with him. While he does his best to convince Ripper to call off the attack, Mandrake’s feckless British propriety is no match for Ripper’s paranoia. Ripper proceeds with the plan—convinced that the Soviets are out to rob Americans of the vitality of their precious bodily fluids through the fluoridation of the water supply.

Meanwhile, Major Kong pilots a bomber plane near Russia after Ripper orders the commencement of Wing Attack Plan R. They immediately move on their target, and look to drop some nukes on Russian soil.

Alarmed, President Merkin Muffley hears this news, and immediately meets with his advisors in the war room at the Pentagon. His chief military advisor, General Buck Turgidson, tells the President that our planes are on their way to bomb the Soviets—they turned their radios off, and they can access them with a certain code. Unfortunately, General Ripper is the only one with that code.

While one team tries to crack the code to call off the bombers, the President invites the Russian ambassador, Alexei de Sadeski, into the war room—despite General Turgidson warning him against it. Together, they call the Russian Premiere, Dimitri to tell him the location of the planes so they can shoot them down. Dimitri alerts them to a secret Russian doomsday device. It will destroy all life on the planet if a single nuclear bomb falls on Russian land.

Meanwhile, a Russian missile attacks Major Kong’s bomber. It nearly misses, but still takes out the radio system on the bomber; preventing them from receiving the retreat order once Mandrake’s team successfully deciphers the code from Ripper’s ramblings.

Back at the Pentagon, they see that Kong’s plane persists. So the Russians put all their resources into the primary and secondary targets for the bomber. However, the missile also caused the bomber to leak fuel, so Kong decides on a third target.

With the Russian defenses deployed elsewhere, nothing can stop Kong. However, Kong finds the bomb gate is stuck shut. So, Kong straddling the nuke to fix. He repairs the doors just in time to ride the bomb down on the target. He waives his cowboy hat as he hollers into the first of many mushroom clouds.