Over 25 years, as the American South changes profoundly, the friendship between a highly independent, eccentric Jewish matron and the stalwart and very patient black widower her son hires as chauffeur endures and deepens, testing the limits of their differences… and similarities. 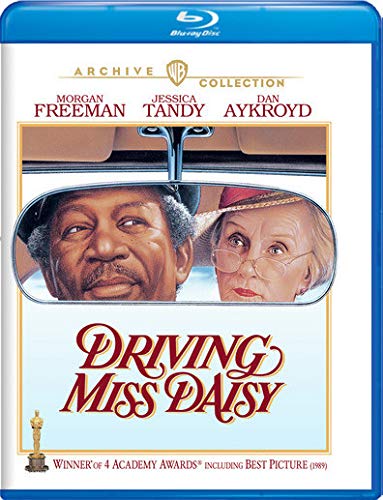 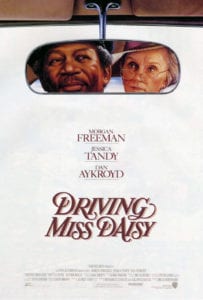 The Best Picture winner that Directed itself begins with Daisy Worthan (Jessica Tandy) having a car mishap in her own driveway ending up into the neighbors yard. License revoked she has difficulty getting around until her businessman textile company owner son Boolie (Dan Ackroyd) arranges a driver, Hoke Colburn (Morgan Freeman).

Not keen at first, Daisy is slowly chipped away for his acknowledgement as Hoke convinces her to let him drive her to the store after he follows her down the street. It takes some getting used to however Daisy soon realizes he’s here to help while keeping her strict outer shell.

Thinking he stole a can of salmon Daisy alerts Boolie to dismiss Hoke. However, Hoke returns the can he took, and all is forgotten. During a peaceful moment at the cemetery visiting her late husband Hoke confesses he cannot read. Daisy helps him on the spot. Then at Christmas passes on a gift to help him learn writing. (Although Daisy says it’s not a Christmas present to keep up her hard exterior.)

On a road trip, ignorant policeman question Hoke. They then unduly remark on both of them as they drive away. They also take a wrong turn, and in a moment of authority, Hoke leaves the car for a minute on personal grounds. In that moment, when Daisy is alone and afraid in the dark, she realizes she needs Hoke.

After her long-time maid Idella, passes away, a friendship between Hoke and Daisy blooms further. Time moves on, and they become two peas in a pod in mind and spirit; culminating in a Martin Luther King event which Daisy attends alone; not thinking of asking Hoke to come along.

One morning as usual, Hoke arrives at the house only to find Daisy showing signs of dementia when she looks for school papers (recalling her job as a teacher). Then in a moment of regaining clarity Daisy admits Hoke is her best friend.

Jumping two years later, Daisy has been in a nursing home, and her house is up for sale. Boolie and Hoke visit her. Having a good day, Daisy is alert enough to respond to Hoke, ask him some questions, and then let him feed her Thanksgiving pie.

Fade Out; that is Driving Miss Daisy.