Recruited by an intelligence agency, outstanding martial arts student Bruce Lee participates in a brutal karate tournament hosted by the evil Han. Along with champions Roper and Williams, he uncovers Han’s white slavery and drug trafficking ring located on a secret island fortress. In the exciting climax, hundreds of freed prisoners fight in an epic battle with Lee and Han locked in a deadly duel. 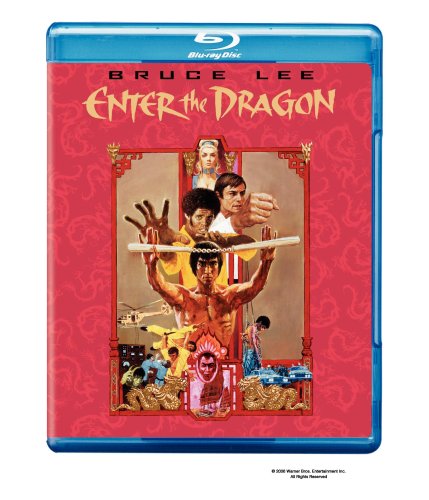 In Enter The Dragon, Lee, Bruce Lee, is a philosopher and skilled martial artist from the Shaolin temple. The Brits ask Lee to go undercover, and help them bring down a gangster named Mr. Han who is accused of drug trafficking and pimping. Lee agrees because Han was once a Shaolin student, and he has brought dishonor to the temple.

Every three years, Mr. Han holds an invitation only tournament on his fortress/island. Lee infiltrates Han’s organization when he receives an invitation to the event. He uses the invite as a ruse to get the evidence needed to bring him down. Also invited to the rumble is Roper, a playboy-gambler who somehow manages to find time to be a tough guy. His old buddy, Williams, who is an actual tough guy with a HUGE appetite for the ladies is also there.

At night, after the first day of fighting, in which both Roper and Williams win their bouts, Lee goes snooping around. Williams spots Lee climbing along a wall as he gets some fresh air. Lee is fleeing Han’s guards, but neither Williams nor the guards know who the masked man is.

The next day, Lee fights O’Hara in the tournament, but Han may be on to Lee for being the secret snoop, and Han looks to make an example out of Lee by having him face off against his most ruthless lackey, O’Hara. Unfortunately for O’Hara, Lee is looking for a bit of revenge himself because O’Hara is the man responsible for Lee’s sister’s death. Lee easily kills O’Hara to the delight of some of the smiling extras in the background.

Han then asks to see Williams in his office where he kills Williams for being outside after dark. He then tries to recruit William’s BFF Roper. Han shows Roper how ruthless he is by letting him see William’s dead body hanging above a vat of liquid.

That night, Han’s men capture Lee while he radios the Brits. Lee now has the incriminating evidence they need to arrest Han. In the morning, Roper, Lee, and a bunch of Shanghaied men fight Han and his guards in an epic finale that leaves Han dead, Lee scratched, and Roper bruised.

The Brits fly in for cleanup while Lee gives Roper the big thumbs up for a happy ending.