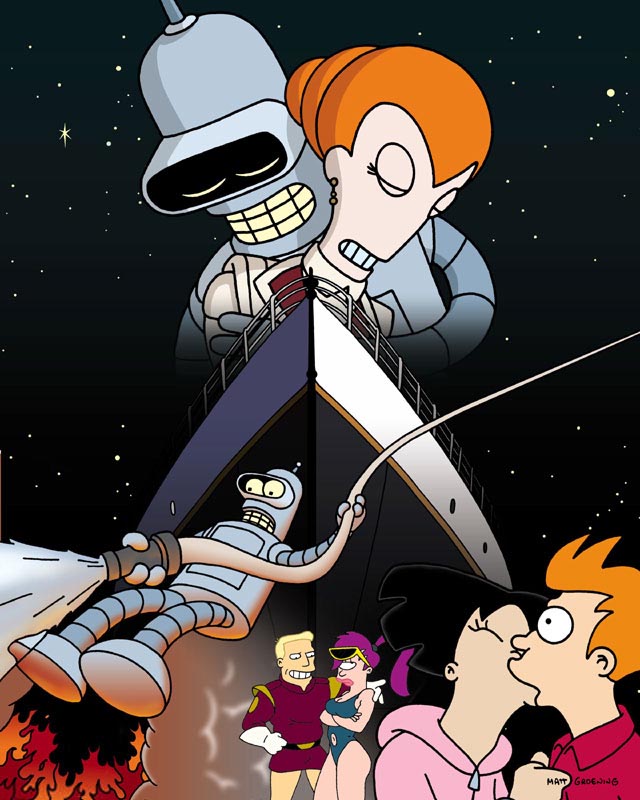 In A Flight to Remember, Fry (Billy West), Bender (John DiMaggio), and Leela (Katey Sagal) return from a delivery on the planet Cannibalon with their lives barely in tact. When Bender tells the Professor (Billy West) they’re quitting, he replies that he’s going to need to get a new crew to go on the company vacation then—they quickly reconsider.

The Professor wants to thank them all for not reporting his countless violations of safety and minimum wage laws. However, the vacation is on a maiden voyage of the largest space cruise ship ever built named the Titanic. None of them see any danger in that name!

We cut to the ship’s christening ceremony where Mayor Poopenmeyer (David Herman) introduces Zapp Brannigan (Billy West) as the honorary captain for the maiden voyage. Zapp immediately tries to rekindle his old love with Leela, but she pretends to be engaged to Fry.

Once inside the ship, they visit the professor’s suite in first class. It’s nice, but the remaining crew’s stuck in the lowest class of the ship. So Bender decides to head to the casino for the next 135 hours. When his cheating unit malfunctions, he loses all his chips, and heads to the bar to sulk. There, he meets a rich fembot named the Countess de la Roca (Tress MacNeille). She’s surprised to meet another rich robot there as they are mostly laborers.

Meanwhile, Zapp Brannigan gets the Captain’s itch for adventure. He orders Kif (Maurice LaMarche) to take the ship off course through a swarm of comets. He then diverts power from the shields, and it’s full speed ahead!

At an All You Can Eat Buffet, Amy (Lauren Tom) runs into her parents. They immediately try to hook her up with the nicest boy in the cabin next to theirs we’ve come to know as the Bisque guy. The mere sight of him and his obese weight puts Amy off. So, she tells them thanks, but she already has a boyfriend. Of course they want to meet him—like now.

Up on deck, Leela and Fry look out into the stars. When Zapp approaches her, she grabs Fry, and kisses him. Zapp lets her know that if it doesn’t work out with the pipsqueak, he will score her on the rebound.

Immediately after Zapp leaves, Amy shows up with her parents to introduce them to HER boyfriend, Fry. She then passionately kisses Fry—much to Leela’s annoyance. Even though it’s all pretend, Leela’s very jealous.

Back in First Class, Bender pretends he’s rich aristocrat to impress the Countess. When he’s alone in her room, he tries to steal her diamond bracelet. However, he finds he isn’t able to take it.

Back at the bar, a confused Bender asks iZac (Phil LaMarr) why he couldn’t steal it. iZac says it’s obvious—Bender’s in love. Bender agrees, and then steals the drinks iZac made for him. iZac immediately calls security on Bender. While they rough him up, the Countess comes to his rescue. She learns Bender’s a penniless thief, but pays the bill anyway.

Out at the pool, Hermes’ wife, LaBarbara (Tress MacNeille), tries to get him to enter the limbo contest. However, he’s afraid to because when he was on the limbo team in the 2980 Olympics, a young fan broke his back imitating him at his meet. Hermes (Phil LaMarr) vowed to quit limbo forever.

As captain of the ship, Zapp says he gets to decide the winner of the contest as Kif complains he should be steering the ship between the comets instead. Zapp makes Leela the winner even though she didn’t even participate. As an award, she and that hair pile, Fry, gets a seat at the Captain’s table.

Over on another deck, Bender confesses to the Countess that he’s a fraud—a poor, lazy, sexy fraud. The Countess replies that she doesn’t love him for his money—she loves him for his artificial intelligence. Then they share a romantic ship-deck kiss, complete with a Titanic-style love montage.

We next head to the Captain’s table at the All You Can Eat Buffet Plus a Whole Chicken. Fry, Leela, the Professor, and his cruise floozy, Hattie McDoogal (Tress MacNeille), sit with Zapp. Amy and her family shows up to complete the party.

The Wongs want Fry to kiss his girlfriend. Zapp agrees. He wants Fry to plant one on his woman as he suspects Leela and Fry really aren’t engaged. Kif shows up as he needs Zapps help with a looming catastrophe. With Zapp away, Amy kisses Fry in front of her parents…and Leela.

On the bridge, Kif tells Zapp that his course correction is proving to be more suicidal than he hoped. Zapp sets a new course instead towards that Blackish Holish thing.

By now, Leela has run off from dinner, and looks out into space on the deck alone. Fry comes to find out what’s bothering her. She says it’s that he kissed Amy. Saying the right thing for once, he replies that he just doesn’t feel that way about her.

In a romantic moment, the camera pans down towards all the couples. Hermes is with LaBarbara. Zoidberg’s with his Jellyfish Nurse (Tress MacNeille), and Farnsworth is with Hattie McDoogal. As Fry and Leela are about to kiss, the ship shakes violently—throwing the two down on the deck. The Titanic is now uncontrollably headed into the black hole—talk about a mood killer!

With the ship falling uncontrollably into the black hole, Zapp makes Kif the captain so he goes down with the ship instead. Zapp then escapes in a small ship of his own. The Planet Express crew tries to get across the ship to the escape pods in time as it begins to break up.

Bender says for them to go on without him as he’s going to look for stuff to steal. Really, he’s going to go look for the Countess instead. Bender finds her surrounded by fire after she fell through the deck. He uses a hose to put out the fire, but as they kiss, he discovers the hose is still on, and now flooding the room.

Meanwhile, Leela ushers the Planet Express crew to the escape pods, but an emergency airlock closes on them. Before it shuts completely, Zoidberg shoves his claw in between it and the floor. With the door release on the other side, all seems lost, but Hermes limbos under the door to save the day.

Back in the flooded room, Bender reminds the Countess that she’s a Class 3 Yacht, and he rides her to safety.

At the escape pods, the Wongs show up with yet another boyfriend for Amy. This one is a captain named Kif. She falls for him as he picks her up, kisses her, and walks her into the escape pod.

Leela and Fry wait for Bender for as long as they can before taking off. As they do, Bender shows up, and grabs the pod door with one hand and the Countess with the other. However, the pod is now two metric tons over weight. They are only saved when the Countess’s bracelet breaks, and she falls into the black hole.

Fry tells Bender it’s possible the Countess is still alive in another dimension somewhere, but the professor tells Zoidberg she’s dead. Bender takes solace that he’ll always have her bracelet. He asks Hermes how much he thinks it’s worth. He replies, “It’s fake, mon.” Bender cries as the pod flies home.

MHM’s Top 20 Films Based on Books

MHM’s Top 20 Films Based on Books