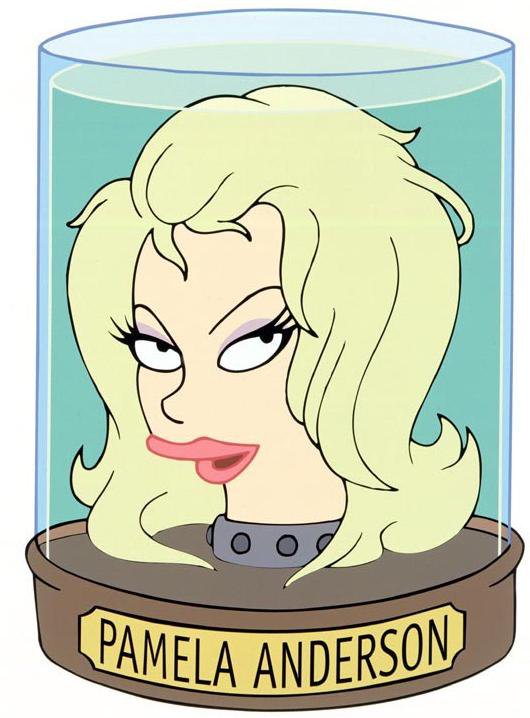 After various advertisements are beamed directly into their dreams, the Planet Express crew heads to the local shopping mall. Trying to buy the product, Lightspeed Briefs, he saw in his dreams, Fry (Billy West) is unable to because he’s broke…and nobody takes Discover.

Meanwhile, Bender’s (John DiMaggio) been shoplifting Robot Oil, and when security spots it, they arrest him. Now, the crew must come up with his bail, but they are 50¢ short. Out the window, Fry notices his old bank is still in business.

They head over to it to see if he has any money in the account. Since he still has his ATM card and remembers his PIN (which is the price of a cheese pizza and large soda at Panucci’s Pizza), the bank locates his account. While the account had 93¢ in it in 1999, after accruing interest at 2.25% per year for 1,000 years, his balance is now $4.3 billion.

With tons of money in the bank, Fry goes on a massive spending spree. However while out buying everyone pizza, he learns anchovies were fished to extinction shortly after the Decapodians (Zoidberg’s race) arrived on Earth in the 23rd century. So, he can’t have any on his pizza.

At an auction, he buys himself Ted Danson’s skeleton for $10,000, and an antique robot toy for Bender (which bears a strong resemblance to Mattel’s Rock ‘Em Sock ‘Em Robots). When the last known tin of anchovies suddenly comes up for auction, it causes a bidding war that pits Fry against Mom (Tress MacNeille). Mom is the richest, most powerful person in the world, owner of Mom’s Old-Fashioned Robot Oil, and a ruthless person. While playing up her sweetheart persona, she ends her bidding after Fry bids $50,000,000 for the anchovies.

Back at her mansion in the sky, Mom doesn’t give up. She needs those anchovies because they represent a potential source of oil that can permanently lubricate robots—thus putting her out of business. She orders her sons Walt, Larry, and Igner to figure out Fry’s pin, and bankrupt him.

The boys kidnap Fry, and using a crude mock-up of Panucci’s, they convince him it’s still the year 2000. “Mr Panucci” says that he fell asleep at work, and orders Fry behind the register where the head of Pamela Anderson orders a cheese pizza and large soda.

When he rings her up, he inadvertently reveals his PIN—the food’s total of $10.77. Walt, Larry, and Igner then empty Fry’s bank account. The bank quickly repossess all of his 20th century artifacts because the check he wrote them bounced. However, he still has possession of his beloved tin of anchovies which was hidden in his sock.

Mom visits Fry at Planet Express where she offers to buy the anchovies off him. However, when she realizes that Fry intends to eat the anchovies, she realizes he’s a dumb ass, and quickly leaves without needing to give him any money.

Fry covers a pizza with the anchovies, and shares them with the rest of the Planet Express crew. Everyone except Fry spits it out in disgust. To which Fry says they are an acquired taste. As Zoidberg enters the room, he smells the heavenly stench, and immediately devours all the remaining pizza. He goes into a euphoric rage when he learns that there are no more anchovies.