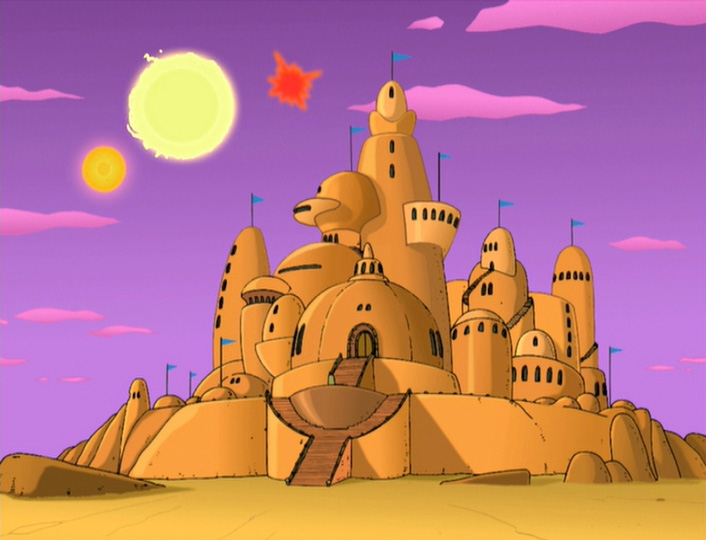 Hermes (Phil LaMarr) chews out Bender (John DiMaggio) because all he does all day is sit on the couch and watch cooking shows. So, Bender decides to be the Planet Express’ cook after watching Neptunian TV chef Elzar (John DiMaggio).

Professor Farnsworth ((Billy West) then sends the crew along with Amy (Lauren Tom) and Dr. Zoidberg (Billy West) on a delivery to the planet Trisol in the darkest depths of the Forbidden Zone. On the way there, the crew eats Bender’s first prepared meal. It’s a slug he saw Elzar cook on his show, but there’s too much salt—only 10% less than a lethal dose—Zoidberg exclaims shouldn’t have had seconds.

Once the ship lands, Fry (Billy West) delivers the package to the palace across the desert and under the heat of the planet’s three suns. When he finally arrives at the Trisolian palace, he finds it deserted. Dreadfully thirsty from the salty slug and scorching heat, Fry drinks from a bottle containing a clear liquid that sits on the throne. Suddenly, armed Trisolians reveal themselves to be liquid-based organisms. As they storm the throne room, they scold Fry for drinking their emperor.

Rather than punish him, the Trisolians hail him as their new emperor. The high priest informs Fry that as part of the coronation, Fry must recite the royal oath flawlessly from memory the next day, or die.

During the pre-coronation party, Leela (Katey Sagal) informs Fry that all previous emperors were assassinated by their successors, AND that the average reign of a Trisolian emperor is only one week.

Of course Fry ignores Leela’s warnings, so she returns to the ship with a vow that she will no longer help him. Right after, a Trisolian tries to drink Fry, but is unsuccessful because Fry is a solid—duh!

At the coronation, Fry recites the oath properly only because he wrote it on his arm, and he’s sworn in as Fry the Solid. As the suns set, the Trisolians begin to glow—including the previous emperor, who’s still alive inside of Fry’s stomach.

He demands they cut Fry’s stomach, and drain him. The Planet Express crew takes refuge from the Trisolians in the throne room while they try to find a way to extract the emperor without killing Fry.

They decide that crying him out of Fry will be the best method. However, Fry’s too macho to cry, and he needs more help than Bender’s insults. Bender calls Leela on Fry’s behalf. However, she doesn’t know why she should.

Eventually, she does decides to help Fry despite her vow. She must now fight her way past Trisolian forces to reach the palace. As Bender notices what is happening, he lies to Fry, and tells him that they killed Leela.

Fry’s so sad that he begins crying. However, Leela arrives after two drops. So instead, she beats Fry; causing him to cry with pain. After the crew takes turns beating him while Fry thanks them, they finally extract the whole emperor out of him—only realizing it when the emperor himself hits Fry with a chair. Now free, the crew can return home.

Summer Blockbusters the Ladies of MHM Want to See in 2017

Summer Blockbusters the Ladies of MHM Want to See in 2017