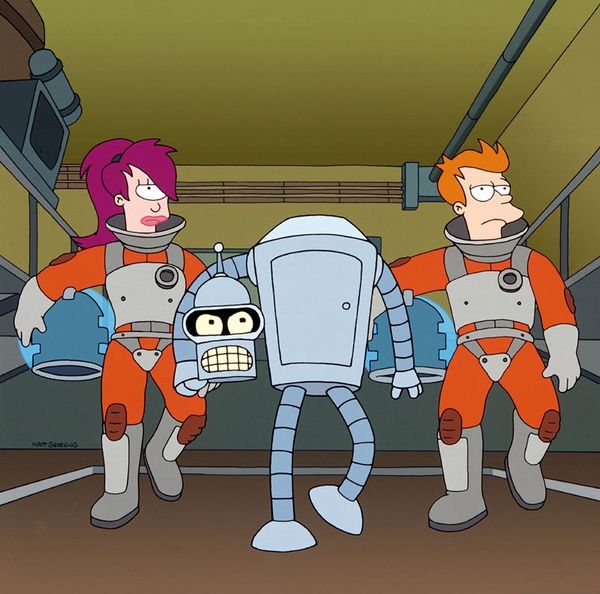 Professor Farnsworth (Billy West) invites the crew of Planet Express to join him at the Academy of Inventors’ symposium—an annual event where inventors display their latest creations. He plans to present his latest invention, the Deathclock. When a person sticks their finger into the machine, it displays the date and time that person will die.

That night at the symposium, the crew meets one of Farnsworth’s former students, Professor Ogden Wernstrom (David Herman). 99 years prior, when he was a student in Farnsworth’s class, Wernstrom earned an A-minus on a pop quiz. Since that low grade was unacceptable, he vowed to take revenge on the Professor, even if it took him 100 years.

With time almost up, Farnsworth figures he’s now essentially clear of that revenge. Wernstrom presents his invention that he calls a reverse SCUBA suit that allows fish to breathe water while walking about on land. Cinnamon the fish demonstrates for him. When he asks Farnsworth what his invention will be, he says he hopes it’s better than last year’s Deathclock.

Now with only 10 minutes before his presentation, Farnsworth scribbles a new invention on his napkin. He presents it to the assembled crowd which he calls the Smelloscope. It’s a device that allows people to smell distant cosmic objects.

The audience laughs at him—causing him to sweat. As he does so, he wipes the napkin on his head which blurs the drawing. Wernstrom stands up to declare that invention deserves the worst grade imaginable—an A-minus-MINUS.

Back at Planet Express, Farnsworth mopes that he’s too old before deciding to build the Smelloscope anyhow. When the crew comes to see if he’s built it, he replies that he forgot he built it last year, and gives them a demonstration.

Fry (Billy West) smells Jupiter, Saturn, and other objects for a bit until he stumbles upon a stench so foul, it’s right off the funkomoter. Farnsworth calculates its trajectory to find that object will collide with New New York City in less than 72 hours, reducing it to a stinky crater. Bender (John DiMaggio) immediately gets to lootin.

The Professor finds a movie on the internet which reveals the object is a giant ball of garbage from Old New York the city launched into space on a mob-obtained rocket in 2052. When they warn Mayor Poopenmeyer (David Herman), he consults his science advisor who turns out to be Wernstrom. However, it’s only after a distress message from Neptune comes in about a smelly garbage ball that they believe him. The Professor comes up with a suicidally dangerous plan to destroy it.

He sends the Planet Express crew to plant a bomb on a fault line next to coffee areas and deposits of AOL floppy disks on the garbageroid. Farnsworth says that if it blows up later than planned, the explosion will rain garbage across the entire Earth—killing millions. However, once they set the bomb, they will only have twenty-five minutes to escape.

Once the crew lands on the garbageroid, Fry goes on a nostalgic trip down memory lane from all the 20th-century items on it. We see a Beanie Baby, a Mister Spock collectors plate, and a pile of Bart Simpson dolls. Leela (Katey Sagal) tells Fry that these things were garbage when they were new, which is why they are in the garbageroid now. Fry wants to keep them.

Once they start the bomb, they realize the Professor put the bomb’s countdown display in upside down. They actually only have 52 seconds. Fry panics before Bender throws the bomb into space to save them from death. They then return to the Earth in shame.

So, the Mayor has Wernstrom help because he’s a real scientist. Wernstrom demands tenure, a grant, and five graduate students—at least three of whom are Chinese. When the mayor agrees to his conditions, Wernstrom reveals that he has no plan, and leaves because he’s set for life.

Farnsworth hasn’t given up though He comes up with a second plan to save the city—launching a second ball of garbage to bounce against the first one. That will send it flying into the sun without smashing to bits. The Mayor exclaims that the city’s been garbage free for 500 years, so there is no way to make it. Being a slob from the 20th Century, Fry demonstrates how easy it is to make garbage.

He orders the entire city to throw away everything, and they are able to create a second ball of garbage in no time flat. They then fire it at the first garbage ball. As the rocket flies into the air, it hits the other garbage ball which then slingshots it around planets and into the sun. The new ball flies out of the solar system.

After saving the city from the garbage ball, the Mayor gives Professor Farnsworth the inventor’s award that they confiscated from Wernstrom because he’s a a jackass. Wernstrom vows to get Farnsworth for this even if it takes another 100 years!

Fry and Farnsworth dismiss Leela’s concerns that the new garbage ball will one day return and destroy a future generation. Professor Farnsworth says that it will not be for at least another hundreds of years to which Fry gleefully adds, “That’s the 20th Century spirit!”

Symbolism and Hidden Meanings in 2009’s Up

24 Christmas Films To Watch in December Before Santa Clause Arrives!

Symbolism and Hidden Meanings in 2009’s Up

24 Christmas Films To Watch in December Before Santa Clause Arrives!