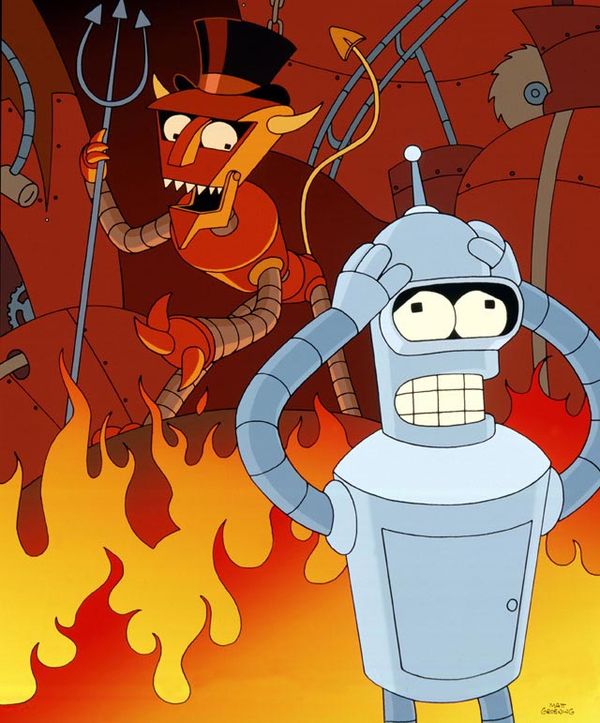 After a Beastie Boys concert at Madison Cube Garden, Bender (John DiMaggio) meets up with his old pal, Fender, a giant guitar amp. They attend a party with no booze and one hooker, so Bender’s not impressed. Fender shows him how to jack on, a form of electricity abuse akin to human drug abuse. Bender quickly becomes addicted to it.

The next day, Bender takes Fry (Billy West) to a bad neighborhood where there’s a place called Sparky’s Den. Bender has Fry wait outside for quite some time while he jacks on inside. When he comes back out, he collapses, and Fry drags him back to work.

Once there, Hermes (Phil LaMarr) complains that the electricity use is skyrocketing because someone is wasting it. Leela (Katey Sagal) accuses Bender of jacking on in the bathroom, but the Professor (Billy West) interrupts to send them on a delivery to Sicily Eight, the mob planet, before she can get him to confess.

On the way back from the delivery, the ship comes across an electrical storm in a nearby nebula. Bender jumps outside the ship, and forces it into the storm. He receives a near-lethal dose of electricity from it, and it nearly destroys the ship and crew in the process as well.

The crew performs an intervention, and Bender accepts he has a problem. He winds up at the Temple of Robotology where he finds religion before inviting the crew to his baptism. Once there, he accepts the principles of Robotology on pain of eternal damnation in Robot Hell should he go against them. Once he’s baptized in oil, the Reverend Lionel Preacherbot (Phil LaMarr) welds the symbol of Robotology to Bender’s case.

The new Bender annoys the hell out of the Crew with his religious views. Fry and Leela decide they want the old Bender back, and set out to reacquaint him with a little thing called sleaze.

First stop is a fake delivery to Atlantic City, New Jersey where Bender finds himself tempted with alcohol, prostitutes, and easy marks for theft. He quickly succumbs to temptation, but when he rips off the Robotology symbol and throws it away, it begins to ominously beep.

That night, while seducing three female robots in a hot tub in Trump Trapezoid, a knock at the hotel room door interrupts his sexy time. When he opens the door, someone scares the crap out of him before knocking him unconscious.

Bender wakes to see the Robot Devil (Dan Castellaneta) who greets him to Robot Hell. The next morning, Fry, Leela, and Nibbler (Frank Welker) arrive to his room to see burnt markings in the form of Bender’s body in the carpet which indicate something dragged him away. They use Nibbler’s sense of smell to track him down.

He leads them to Reckless Ted’s Funland. At the Inferno ride, they finds a small entrance which takes them down to Robot Hell. Meanwhile, the Robot Devil sings Bender a little ditty that details his upcoming punishment. As the song ends, Fry and Leela arrive via a winding slide they were tricked into falling down. Leela demands their friend back, but the Robot Devil is running the show down there.

However, he’s obligated under the Fairness in Hell Act of 2275 to inform them that if they can best him in a fiddle contest, they can win his soul back…and get a solid gold fiddle to boot. The Robot Devil goes first, and is really good. However, neither Fry nor Leela can play a fiddle, but Leela used to play the drums, so they are sort of similar.
She plays a few notes, and is worse than worse. She decides to switch to a drum solo, and beats the Robot Devil over the head with the fiddle instead. As the three run off, Bender is able to steal the wings off a flying torture robot. He attaches them to his back, and flies Fry, Leela, and himself to safety.

On the way out, Leela drops the stupid gold violin to lighten the load which helps speed Bender’s flight. The heavy fiddle crashes onto the Robot Devil’s head as he screams like a little girl.

Once free, Bender promises to never be too good or too evil, but to remain as he was before joining the Temple of Robotology. Leela asks if he can be a little less evil than that to which Bender asks her if she can survive a 700 foot fall.