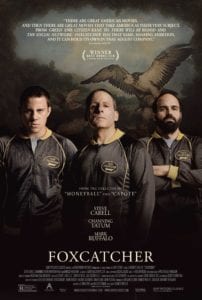 I was genuinely hoping for a special movie since all the awards shows and ratings raved about this movie. Plus the fact real wrestlers deserve something better than “Vision Quest” to portray what real wrestling looks like. What a missed opportunity.

This is Olympic-quality wrestling, not the WWF and that fake garbage. True wrestling. The sport ancient Olympians in Greece spent their entire lives trying to perfect with their bodies. Wrestling is one of the most graceful, powerful, challenging sports in the world. Anyone who ever participated in this sport will attest to the mental and physical toughness required. It also isn’t for everyone as it can be slow, uneven and boring to someone who has never suffered through drastic weight loss, brutal practice sessions in 100+ degree gymnasiums, psychological games by coaches and competitors alike, as well as the (sometimes) inhumane practice facilities with which the sport associates.

The real-life story is horrible. du Pont was a nutcase with too much money and the Schultz’ were probably a little too desperate/trusting for their own good. But this movie is simply not good. The cinematography is gorgeous and the actors definitely go against their normal stereotypes. However, I believe the subjects deserved a more honest treatment and are not nearly as lummox-like as portrayed. Both wrestlers were beasts (in a good way) and two of the most powerful, beautiful, graceful wrestlers who ever wore a United States wrestling singlet. They were GREAT. I wish I could say the same thing about this movie. It is average at best.

I met Mark Schultz decades ago after his 1984 gold medal and before the events of this movie transpired. Mark was kind, supportive and intelligent in real-life. I can say without equivocation that the Channing Tatum “lummox/Neanderthal” portrayed in the movie is not close to the talented, good man in real life. Mark Schultz deserved better. I never met John du Pont or Dave Schultz but can assume they were caricatures as well.

It pains me to say this as an ex-wrestler, but this movie BORED me. You have two of the most fascinating American wrestlers in history but you barely see them in their glory. It felt like watching two overweight super-heavyweights in the middle of a stalling match where the referee waits and waits and waits for someone to make a move… that never shows up until the VERY end, after the audience is already done watching and doesn’t care anymore.

From a wrestler’s standpoint, I’d say the original true story was worthy of a trip to the Olympics in the Greco-Roman style but not worthy of making the medal round. The story probably deserved to be told but as a documentary, not mainstream. This movie is more like a high school single-A state champion who stalls too much and, when up against better competition from worthy champions (better movies), this movie isn’t good enough to make a college team, let alone make it to the Olympics. 5 out of 10 is the best I could give it and that’s only because I like the Schultz boys and what they brought to a great sport. The movie really isn’t worth your time. Pleeeeeez make a better wrestling movie, Hollywood. Still waiting for something to beat “Vision Quest” as a decent wrestling movie. Probably just wishful thinking…

A true wrestling story that deserved to be told...better than this.