Craig Jones and his cousin Day-Day are back with a Christmas adventure. The cousins’ apartment is broken into on the morning of Christmas Eve, resulting in the boys’ rent money and Christmas presents being taken. Craig and Day-Day are forced to get jobs as security guards at a rundown shopping center in order to make enough money to pay their rent or they will face evictions. However, the duo have one of the strangest days ever as they experience another Christmas in Compton.

‘Friday After Next’ Movie Summary 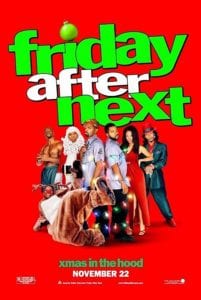 Craig Jones (Ice Cube) and Day-Day Jones’ (Mike Epps) apartment is broken into early in the morning on Christmas Eve. Craig fights with the robber while making futile attempts to wake up the sleeping Day-Day. The apartment is trashed and the robber escapes with the cousins’ Christmas presents and their rent money. A short time later, the police arrive to take a report of the crime. After the police leave, the boy’s landlord Mrs. Pearly (Bebe Drake) comes to the apartment and tells them that if the two do not pay their rent money by the end of the day, she will evict them. She further threatens to send her homosexual ex-convict son, Damon (Terry Crews), after them if they do not pay in a timely manner.

Later that day, Craig and Day-Day receive some good luck and get jobs as Top Flight Security Guards from Moly (Maz Jobrani), the property manager and owner of a rundown shopping center that the boys are assigned to patrol. While on the job, Craig and Day-Day meet Donna (K. D. Aubert) and Money Mike (Katt Williams), the owners and operators of a little shop in the center called “Pimps and Hoes.” The shopping center also has barbecue rib restaurant called “Bros. BBQ” which is owned by the cousins’ fathers, Willie (John Witherspoon) and Elroy (Don “D.C.” Curry).

During the first couple of hours on the job, the boys stop an attempted robbery of Money Mike’s store and catch the drugged out crooks. The grateful Mike offers the boys a cash reward, but Craig refuses the money and instead invites him to his Christmas party. Meanwhile, Willie and Elroy are having trouble with some children in the restaurant. One of the kids kicks Elroy, which results in the elder man taking out a belt and beginning a series of beatings on the kids. A little while later, Moly gives Craig and Day-Day a lunch break.

While on break, a group of thugs shows up and chases after Craig and Day-Day in retaliation for Day-Day chasing off their Christmas caroling grandparents earlier in the day. When the gang can’t find the hidden security guards, the thugs proceed to beat up Moly, believing that he hid Craig and Day-Day. After witnessing the beating on Moly, Craig and Day-Day throw away their uniforms. Moly, upset with being beaten up, fires the cousins even though they were actually on their lunch break. Willie retaliates against Moly for firing his son and reports Moly to the Department of Health.

Later that night, Craig and Day-Day throw a rent party to recoup their stolen rent money and stay in their apartment. Money Mike uses the cousins’ bathroom, but he is interrupted by Damon who suddenly appears and tries to sexually assault the store owner. However, Mike uses a set of pliers to crush Damon’s testicles. After letting the ex-con go, Money Mike begins to run away while Damon begins a slow pursuit. Mrs. Pearly encounters Willie and begins to hit on him, which causes Craig’s mother, Betty (Anna Marie Horsford), to attack the landlord when she catches the two together. Meanwhile, Craig and Day-Day see the robber who broke into their apartment and begin to chase him. They chase the man through a variety of obstacles but they ultimately catch the man after he gets run over by Pinky’s (Clifton Powell) limousine.

The film ends with the Craig and Day-Day retrieving all of their stolen money and Christmas presents. They tie the robber up on his roof. During the credits, it is revealed that Craig and Donna hooked up after Craig returned from chasing the robber, while Damon continues to chase Money Mike through the neighborhood. Finally, Ms. Pearly calls the police to stop the party, but the police leave after being bribed with some high grade Christmas marijuana.