When someone murders Paula Alquist’s aunt, Paula, who lives with her, finds the body. Police fail to find the killer, but Paula soon leaves for a far off school anyway. Ten years pass, and Paula returns to London with a new husband. They take up residence in her aunt’s old house which she has since inherited. As Paula’s husband increasingly isolates her, she begins to notice strange goings-on. Everything from missing pictures to odd footsteps in the night, and even the home’s gaslights dim without anyone touching them. As Paula fights for her sanity, her new husband’s intentions start to come into question. 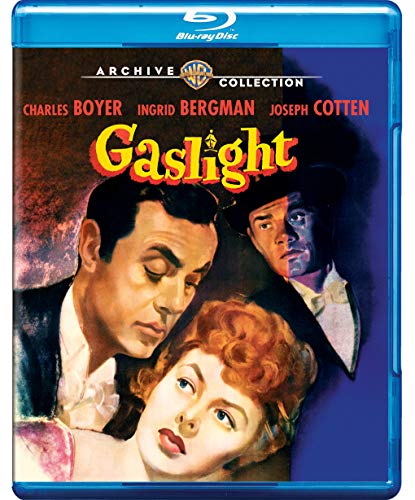 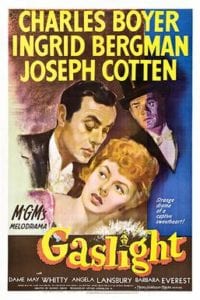 Gaslight begins with the murder of the world-famous opera singer, Alice Alquist at her home on No.9 Thornton Square. Alice’s 14-year-old niece, Paula interrupts the murder, so the killer leaves without stealing Alice’s jewels. Alice raised Paula ever since her own mother’s death, but with Alice dead, Paula heads to Italy to learn to be an opera singer as well.

Years pass, and Paula is now a grown woman. She marries Gregory Anton after only knowing him for two weeks. He stubbornly insists she return with him to London where she doesn’t know anyone, and live at her Aunt Alice’s long abandoned townhome.

To quell any of her misgivings, Gregory suggests they move all of Alice’s furnishings to the attic. As they do, Paula finds a letter from a Sergius Bauer addressed to her aunt. Gregory is infuriated with her discovery, but claims his outrage is due to frustration watching Paula experience all these bad returning memories.

Odd things begin happening to Paula once she’s settled in. She loses a brooch from her handbag that Gregory gave her. One of the pictures in her house mysteriously disappears from the wall. Gregory accuses Paula of taking it, but Paula doesn’t remember doing it at all. One other time, Paula hears footsteps coming from the attic, but Gregory sealed it, so nobody could be up there. Paula also claims to see the gaslights in the house brighten and dim for no real reason. Gregory doesn’t believe her, and does his best to convince her it’s all in her imagination.

By now, Gregory has isolated Paula from everyone and everything in the world…for her own good of course. He claims her nerves are making her a kleptomaniac, and she’s going crazy. On top of that, Gregory is very jealous of the attention other men give her.

Once when Gregory takes Paula to a friend’s house, he shows Paula his watch chain where the watch has mysteriously disappeared. When he miraculously finds it in Paula’s handbag, she freaks out, so Gregory takes her home. This leads Paula to believe she really does have a problem, and she now doesn’t want go out in public.

Paula also has a young maid named Nancy, and Paula soon becomes convinced that Nancy hates her. In reality, Gregory spends his time flirting with Nancy, and then convincing Paula she’s just paranoid about the woman.

What Paula doesn’t know is that Gregory is in fact, Sergius Bauer; the man who murdered her Aunt Alice. He planned all along to seduce Paula so he could steal Alice’s jewels. All the weird goings on in the house is due to him rummaging through Alice’s items in the attic to find them.

Those footsteps Paula “imagines” are actually his, and the flickering lights Paula witnesses is from him turning on the attic lights; causing a bit less gas in the downstairs lights. Paula’s kleptomania is actually Gregory using his sleight of hand to fool her.

Gregory plans on driving Paula crazy in hopes of being able to institutionalize her, and then ransack her home to find the jewels without any interference from her. His plan almost succeeds, but during a chance encounter at the Tower of London with Inspector Brian Cameron of the Scotland Yard, things take a turn for the better for Paula. Inspector Cameron knew Alice as a child, and seeing Paula sparks his interest in Alice’s cold case.

He and his team are able to figure out that Gregory uses the vacant house next door to slip in and out of Paula’s attic through a skylight unnoticed. The Inspector finally manages to visit Paula inside her house where he confirms that the gaslights are flickering, and are not part of Paula’s imagination.

That very same night, Gregory finally discovers Alice’s missing jewels hiding in plain sight; disguised as ordinary costume jewelry. He returns to Paula only to discover someone visited her there. Even though the jig is up, Gregory still manages to convince Paula she’s imagining everything.

Unfortunately for Gregory, Inspector Cameron is still there, and he and his men arrests Gregory, and tie him up in a chair. Vindicated, Paula taunts Gregory as he sits there. Gregory makes another attempt to manipulate her so he can escape. She debating on if the knife in her hand is real or not. Could that be part of her imagination? She turns to the Inspector, and has him take Gregory away for good.