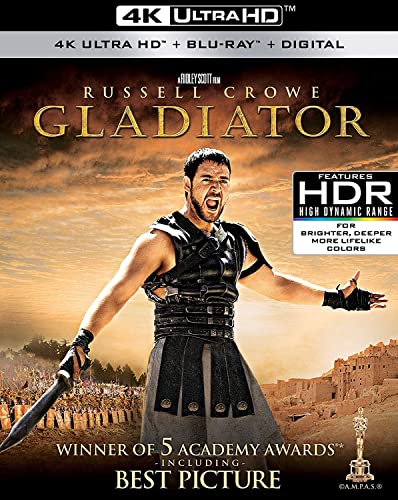 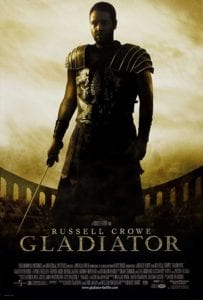 Gladiator begins after General Maximus destroys the last of the barbarian resistance. Roman Emperor Marcus Aurelius is morose, and wishes to leave a more positive legacy on his death. He tells Maximus that he will appoint him Emperor on his death so that Maximus can return government authority to the Roman Senate. Maximus demurs, since he just wants to return home to his family and farm.

Marcus’ scheming and perverted son, Commodus, doesn’t take the news well. He murders his father and send Maximus to his death, claiming the throne for himself. Maximus is wounded but survives execution. He races home to save his family. But when he arrives, they have already been burned and hanged.

Maximus feints and awakes as a slave who is sold to a gladiator promoter named Proximo. After initially refusing to fight, Maximus puts his general skills to work and quickly becomes a fan favorite gladiator. Meanwhile, Commodus struggles to gain acceptance as the Roman Emperor. He plans to disband the Senate and butters the masses up by bringing games back to the Colosseum. He also tries pretty hard to boink his sister, Lucilla. But she resists.

Proximo is called to Rome to put on a show with his gladiators. Maximus comes determined to succeed so he can meet Commodus face to face one last time and exact his revenge. Maximus is sent with his teammates to be fodder for a reproduction of the Roman victory over Carthage. Everyone is surprised when Maximus’ crew wins the battle. Commodus comes down to personally greet the winners and curry favor with the crowd. When he learns that Maximus is alive, he is forced to spare him or face the displeasure of the Roman people. So he spares him.

Maximus learns that his former army is still loyal to him. Lucilla and Maximus plot with a Senator, Gracchus, to assassinate Commodus and fill the power vacuum with the Roman Senate. Maximus wins a fixed match in the Colosseum, and the plot continues. However, Lucilla sells everyone out when Commodus threatens her son. The plot is stopped, and Maximus is captured.

Commodus takes Maximus to the Colosseum for a fixed duel, stabbing him in the ribs just before the fight. Maximus win the duel nonetheless and kills Commodus as the Praetorian Guard stands by. Maximus falls dead and joins his family in Elysium as the Romans try to use his death to promote the Senate’s authority.