In Godzilla Raids Again, Koji Kobayashi is a spotter for a Japanese fishing fleet who crash lands his plane on a barren island. His best friend, Shoichi Tsukioka, finds him, and lands his plane to rescue him. The men are shocked to see two giant monsters fighting before falling into the ocean.

As they race back to Japan to inform the government what they saw there’s a realization that one monster closely resembles the original Godzilla. The new monster they dub Angilas. Soon, the two monsters arrive in Osaka to resume their battle. Will the two monsters destroy Osaka before they can destroy each other? Will the Japanese government fight these two threats off before that? 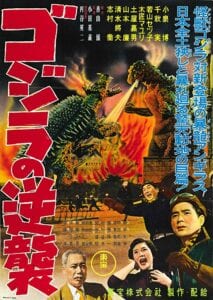 Godzilla Raids Again begins several months after the events of the original Godzilla film. Two pilots of sea propeller planes are hunting for schools of fish for a tuna cannery company. When the pilots see fish, they are to radio headquarters in Osaka who then direct the fishing trollers where to go.

One of the pilots, Koji Kobayashi (Minoru Chiaki), develops engine trouble and is forced to crash land near Iwato Island. The other pilot, Shoichi Tsukioka (Hiroshi Koizumi), goes to assist his friend and lands in the water near the island.

The two monsters battle on the island, causing rock slides and avalanches before tumbling together into the ocean and disappearing. The pilots get back onto Tsukioka’s plane and return to their headquarters to report their findings.
In Japan, Dr. Kyohei Yamane (Takashi Shimura), who experienced Godzilla’s attack in 1954, confirms that this Godzilla is a second member of the same species, and that both monsters were likely reanimated by hydrogen bomb testing conducted by the United States in the Pacific Ocean.

Based on his previous experience with the Godzilla monster, Dr. Yamane recommends against the use of conventional weapons and suggests using flares to lure Godzilla away from Japan and any potential catastrophic damage.

Arrival on the shores of Osaka

Ultimately, Godzilla does arrive on the shores of Osaka, where the two fishing pilots are primarily based from. With Osaka in a total blackout, the military jets deploy flares that are successful in luring Godzilla back out to sea. Unfortunately, a group of prisoners stage an escape from their prison transport.

The convicts steal a truck and lead the authorities on a chase through Osaka before they crash into an industrial building and start a massive fire. The large fire attracts Godzilla back to Osaka’s shores. Even worse, Anguirus emerges from the ocean, seemingly attracted by the fire and the flares, and begins to attack Godzilla.

The two giant monsters battle, causing devastation on the shoreline of Osaka. They destroy many buildings as the subways flood. Eventually, Godzilla kills Anguirus and returns to the ocean.

With the danger seemingly passed, life begins to return to normal. However, when one of the company’s fishing trollers winds up destroyed, they presume Godzilla did it. The military, along with Tsukioka and Kobayashi, begin a massive search for Godzilla. Ultimately, they discover Godzilla near a small, icy island. Tsukioka notifies the cannery, who notifies the military.

Tsukioka transfers to the military to fly jet planes against Godzilla. Kobayashi is killed by Godzilla in his little prop sea plane when he tries to keep Godzilla from returning to the safety of the sea. The military’s plan of dropping bombs on Godzilla has little effect, but it is noticed that the explosions are beginning to cause an avalanche of snow and ice that begins to bury Godzilla. They switch plans and being bombing runs on the mountain.

Eventually, the snow and ice collapses around Godzilla, and buries him in it—trapped forever—or is he?