Gone with the Wind tells the tale of Scarlett O’Hara and the three loves of her life; Tara (her family plantation), Ashley Wilkes, and Rhett Butler. Through three husbands and one child, Scarlet uses all of her might to preserve Tara through the destruction of the American Civil War. She pines shamelessly for Ashley Wilkes despite his marriage to the saintly Melanie Hamilton. Scarlett is her own worse enemy as she realizes too late that her true love is a man a lot like her, Rhett Butler.

‘Gone with the Wind’ Movie Summary 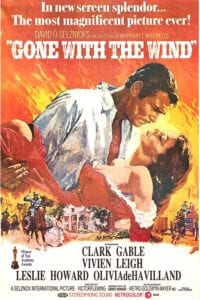 Margaret Mitchell‘s ‘Gone with the Wind’ begins in 1861. The United States finds itself on the verge of civil war. Scarlett O’Hara lives on her family’s cotton plantation in Tara, Georgia with her parents and two sisters.

Scarlett is secretly in love with Ashley Wilkes, but at a barbecue at Ashley’s nearby plantation, Twelve Oaks, he announces he’s engaged to marry his cousin, Melanie Hamilton.

At the party, Scarlett lets her feelings for Ashley be known to him in a private conversation, but he balks at her love talk; claiming he’s more compatible with Melanie. Rhett Butler manages to overhear the conversation which angers Scarlett.

The party comes to a halt when all the men hear war’s been declared. The proud boys rush off to enlist in the Confederate Army.

Ashley gives Melanie a goodbye kiss as Scarlett watches on. So, in the heat of the moment, Melanie’s younger brother, Charles, proposes to her. Scarlett accepts his offer even though she doesn’t love him. They marry before he runs off to war.

Pneumonia and measles quickly kill Charles while he serves in the Confederate Army. Widowed, Scarlett’s mother ships her to their Hamilton home in Atlanta to lift her spirits.

Take a good look my dear. It’s an historic moment you can tell your grandchildren about – how you watched the Old South fall one night. Rhett Butler

The O’Haras’ house slave, Mammy, knows better. She knows Scarlett secretly wants to wait there for Ashley to return in Atlanta.

At charity event there, Scarlett meets Rhett again. He’s now a blockade runner for the Confederacy. Although Scarlett’s supposed to be in mourning over her husband’s death, the truth is, she never really loved him. Even so, it’s still considered a social faux pas for her to attend the gala.

The party not only celebrates a Confederate victory, it also raises money for the Confederate war effort. Organizers invite the well-to-do men to bid on dances with ladies, and Rhett makes a very large one for a dance with Scarlett. To the chagrin of the guests, Scarlett agrees to dance with him.

After the Battle of Gettysburg, the war begins to turn against the Confederates. Many men from Scarlett’s town die in the battle. Scarlett, only thinking of herself, tries to seduce Ashley while he’s on a Christmas furlough. She’s unsuccessful, but Ashley still kisses her on Christmas Day.

Eight months pass, and the Union Army besieges Atlanta. Scarlett and her other house slave, Prissy, deliver Melanie’s baby without any sort of medical assistance. She enlists Rhett’s help in getting Prissy, Melanie, and her baby back to Tara.

Rhett takes them as far as the edge of town. Once there, Rhett returns to Atlanta to fight the North; leaving the women to fend for themselves on their way back to Tara.

Once home, Scarlett finds the plantation destroyed. Only her father, her sisters, and two former slaves, Mammy and Pork, remain. Her father lost his mind from the war, and typhoid fever killed her mother just before Scarlett returned.

Amongst all the destruction and misery, Scarlett vows to do anything it takes to rebuild Tara and her family.

With the defeat of the Confederate army, the O’Hara family works Tara’s cotton fields. Scarlett’s father dies after a horse throws him from his saddle, but that’s okay; Ashley’s back home! Unfortunately, he’s of little help with tending to the fields.

Scarlett begs Ashley to run away with her, and this time, Ashley reciprocates his affection for Scarlett, but he can not leave Melanie.

The Reconstructionists levy huge taxes on the defeated Southerners. To pay them on Tara, Scarlett tricks her sister’s wealthy fiancé, Frank Kennedy, to marry her instead of her sister.

One night, Frank, Ashley, Rhett, and a few other men raid a shanty town in retaliation for their attack on Scarlett. Frank dies in the melee. Frank’s body is barely cold before Rhett proposes to Scarlett. She quickly accepts.

In time, their marriage produces a girl named Bonnie Blue, but Scarlett still has the hots for Ashley. She thinks Bonnie Blue’s birth ruined her figure, and she tells Rhetts she’s not having another child. Furthermore, she’s not sleeping in the same bed as Rhett any longer.

One day, Ashley’s sister, India, spots him embracing Scarlett over at Frank’s mill. India hates Scarlett, so she spreads rumors about the two.

Rhett hears the rumors, and forces Scarlett to attend a birthday party for Ashley…alone. Melanie stands by Scarlett to let everyone know the rumors are false.

When Scarlett returns home from the party, she finds a drunk Rhett downstairs and boy is he angry. They argue, and Rhett kisses her… without her consent. He grabs her. Takes her, in his arms, up the stairs, and to his bedroom where he has sex with her; possibly against her will.

The next day, a sober Rhett apologizes, and offers Scarlett a divorce which she rejects outright. Rhett heads off to London for a trip, but when he returns, Scarlett lets him know she’s pregnant. Unfortunately, they argue again, and Scarlett falls down the stairs. She suffers a miscarriage.

During her recovery, Bonnie suddenly dies after attempting to jump a fence with her pony. In addition, Melanie is on her deathbed from complications with her new pregnancy.

Scarlett consoles Ashley as Rhett returns home to Atlanta. It’s only now that Scarlett realizes that Ashley’s only ever loved Melanie. So, she runs back home to Rhett, only to find him preparing to leave her forever.

She pleads with him to stay. She tells him she’s only ever loved him, and not Ashley. However, Rhett lets it be known that they lost any chance at reconciliation when Bonnie died.

Scarlett begs him one last time to stay, but at this point, Rhett doesn’t give a damn. He walks out the door into the early morning fog. Weeping, Scarlett vows to one day win him back.