Good Morning (Ohayo) is the story of two young boys in suburban Tokyo who take a vow of silence after their parents refuse to buy them a television set. Shot from the perspective of the petulant brothers, Good Morning is an enchantingly satirical portrait of family life that gives rise to gags about romance, gossip, and the consumerism of modern Japan during the late 1950’s. 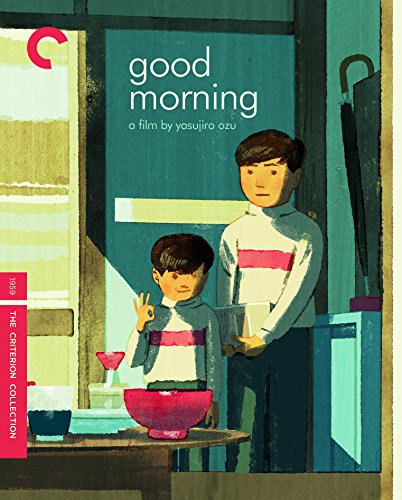 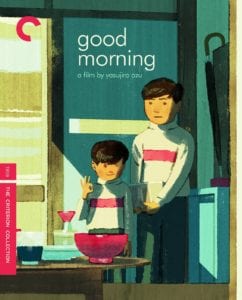 Good Morning takes place in the suburbs of Tokyo during the late 1950’s. A group of boys are returning home from school and play a farting game until one of the boys accidentally defecates in his pants. Two women gossip about their women’s association fees not being paid. The women believe that the organization’s chairwoman, Kikue Haraguchi (Haruko Sugimura), may have kept the money for herself to buy a new washing machine. The women also complain that their young children are attracted to a neighbor’s house because they have a television set. At the neighbor’s house, the kids watch sumo wrestling matches with the home owners, who spend most of each of their days lying around their house in their pajamas.

Minuro and Isamu Hayashi (Shitara Koji and Masahiko Shimazu) wish to watch television at their friends’ house, but their mother Tamiko (Kuniko Miyake) disapproves of it. Nevertheless, the boys go over to their friend’s house and watch television under the pretense that they are studying their English lessons with their tutor. Tamiko eventually learns that her boys are watching television at the neighbor’s house. She confronts them, and the boys turn defiant. The kids demand that their mother buy a television, to which she says no.

Tamiko is approached by one of the gossiping women who asks her if she turned over the association fees to Kikue. Tamiko tells her that she did, but the gossiping woman says Kikue said she didn’t. Tamiko becomes distressed about the missing funds and begins discussing it with her other neighbors. The neighbors all passive aggressively state that they don’t believe she is at fault, but it concerns Tamiko nonetheless. Eventually Kikue hears the rumors of her embezzlement of the funds. She confronts Tamiko about it, believing she is the source of the gossip. Tamiko states that she did not start the rumor and that she gave the funds to Kikue’s mother. Kikue denies ever receiving the funds. Later in the film, Kikue realizes that her mother, who is quite senile and forgetful, did receive the money. Kikue apologizes to Tamiko for the misunderstanding.

A few day later, Minuro and Isamu begin throwing a tantrum and refusing to eat in protest to their mother’s refusal to buy a television. The boys’ father, Keitaro (Chishû Ryû), learns of their misbehavior and tells them to be quiet. However, Minuro does not give in. He states that adults engage in pointless behaviors such as saying “good morning” and refuse to say exactly what they mean. The boys are sent to their room where the vow to remain silent to all adults until they receive a television. However, farting is permissible.

The first adult to experience the boys’ silent protest is Kikue. Kikue believes that Tamiko has instructed her children not to speak with her as retribution for their earlier misunderstanding over the money. She conveys her thoughts to the neighborhood busybody, Mrs. Tomizawa (Teruko Nagaoka). Eventually, everyone in the small community believes that Tamiko is a petty and vengeful person. They each hurry to return all their loaned items from her in fear that she will hold a grudge against them.

Minoru and Isamu continue their silent strike in school as well. Minuro’s schoolteacher recognizes his strange behavior and visits the boys’ home to find out why they are remaining silent. While the teacher is visiting, the boys sneak out of the house with a bowl of rice and a pot of tea that their mother was making. The boys are extremely hungry, but do not wish to ask for food. They are caught by a passing policeman, who causes the children to run away in fear of getting in trouble. The boys disappear but are eventually found by their English tutor outside a train station watching television.

The boys return home to find that their parents have purchased a television set to support one of their neighbors who just acquired a new job as a salesman. The boys are elated and call off their strike. The other people in the neighborhood recognize that the boys are speaking again and conclude that they must have been mistaken about Tamiko.