On Erin Island, an idyllic fishing village off the coast of Ireland, charming but somewhat work-shy Ciaran O’Shea, is tasked with greeting Lisa Nolan, a straight-laced young officer who has arrived from the mainland. Not that there is much for them to do, aside from dealing with the occasional drunk, and that’s usually O’Shea himself. But strange doings are afoot: the crew of a fishing boat disappears, whales start appearing dead on the shore, a local lobsterman catches a strange tentacled creature in his trap. Soon it becomes clear to O’Shea and Nolan that there’s something big out there, and that it’s hungry. It’s time to rally the villagers, arm the troops… and head to the pub. (Courtesy of IFC Films) 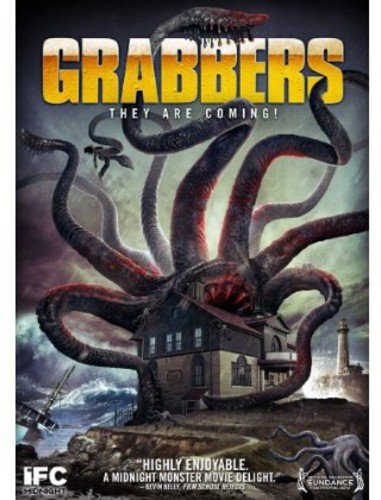 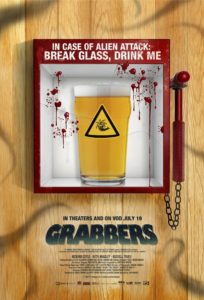 Garda Ciarán O’Shea (Richard Coyle) is an alcoholic police officer who’s assigned a new partner named Garda Lisa Nolan (Ruth Bradley) while his current one is on vacation. He initially resents her because she’s a workaholic who volunteered for temporary duty in his remote Irish island in order to impress her superiors.

Soon after she arrives to the quiet little community, some mutilated whale corpses wash ashore. The town then finds that a ball of green light that fell from the sky brought with it some bloodsucking, tentacled aliens of various size. These “Grabbers” as they call them have set their destructive rage towards the good people of the town.

However, when one of the grabbers attacks the town drunk named Paddy (Lalor Roddy), he inexplicably survives. This leads the local marine ecologist, Dr. Smith (Russell Tovey), to theorize that his high blood alcohol content is toxic to the creatures because they thrive on blood and water.

O’Shea contacts the mainland authorities, but an approaching storm prevents them from sending help (and keeps the locals from escaping). To make matters worse, the rain now allows the last known male grabber to freely roam the island. Nolan and O’Shea decide to organize a party at the local pub, and get them drunk. This way they can both keep the island’s residents safe and keep them unaware of the impending danger until help arrives.

While the town is initially hesitant to join the party with no good reason given, when the pub’s owner, Brian Maher (David Pearse), says all drinks are on the house, well the residents can’t resist! Alcoholic O’Shea volunteers to stay sober in order to coordinate the town’s defenses while everyone else gets white girl wasted.

Once Nolan is pretty tipsy, she tells O’Shea that she actually left the big city to get out from under the shadow of her very popular sister. She says that she like likes O’Shea too despite rejecting his advances earlier. A few minutes later, Dr. Smith wanders outside the pub to get a picture of the alien. He thinks that his drunken state will keep him safe, but nope! These things are smart.

The grabber grabs him, and tosses him into the air. He dies when he hits the ground. Nolan and O’Shea arrive at the pub in a feeble attempt to protect the townsfolk. In her drunken state, Nolan accidentally reveals the true danger everyone’s really in when she assures everyone that nothing is trying to kill them.

In a panic, they head up to the second floor of the pub when a bunch of baby grabbers rumble onto the first. Then Nolan accidentally sets the pub on fire while trying to sneak out. She and O’Shea then get the main adult grabber’s attention, and drive to a construction site with it in hot pursuit.

Their plan is to strand the monster on dry land where it will die due to a lack of water. Unfortunately, the grabber arrives before they finish setting their trap, and it attacks O’Shea. Although it badly injures him, he survives. Nolan then uses the site’s heavy construction equipment to pin the grabber at the base of the site’s pit.

The grabber grabs O’Shea with plans to eat him he, but he manages to dump a bottle of Paddy’s wicked-strong elixir into its mouth. It convulses in pain and releases O’Shea. Nolan then uses a flare gun to ignite some explosives sitting nearby. The resulting fireball kills the large grabber.

By now, the thunderstorm has passed the through the island. O’Shea throws his flask away; vowing to remain sober forever. As the two return to the town they saved, we see a bunch of unknown grabber eggs buried on the beach. What will happen once they hatch remains to be seen.