Set to the backdrop of ‘Awesome Mixtape #2,’ Marvel’s Guardians of the Galaxy Vol. 2 continues the team’s adventures as they traverse the outer reaches of the cosmos. The Guardians must fight to keep their newfound family together as they unravel the mysteries of Peter Quill’s true parentage. Old foes become new allies and fan-favorite characters from the classic comics will come to our heroes’ aid as the Marvel cinematic universe continues to expand. 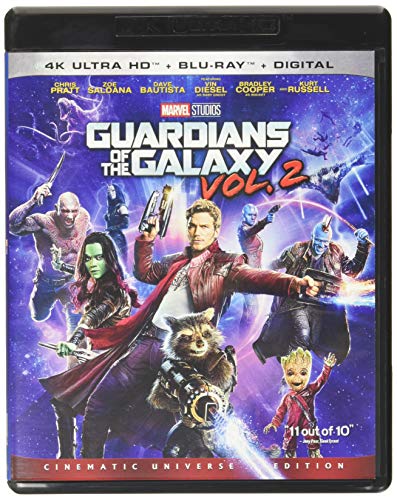 GUARDIANS OF THE GALAXY VOL. 2 [Blu-ray] 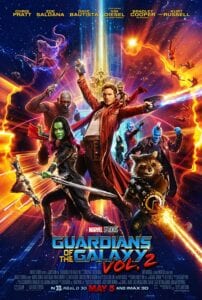 Peter Quill AKA Star-lord, Gamora, Drax, Rocket, and Baby Groot are now known as the Guardians of the Galaxy after they saved everyone in the first film. Ayesha is the leader of the Sovereign race, and she entrusts the Guardians to protect some valuable batteries from an inter-dimensional monster. In exchange for their services, the Sovereign will return Gamora’s sister, Nebula, to them after they caught her trying to steal the aforementioned batteries.

After defeating the monster, the Sovereign winds up attacking the Guardians with their fleet of drones because Rocket decided to steal the batteries for himself. When things seem most grim for the Guardians, some mysterious force destroys all the Sovereign’s drones. The Guardians are then forced to crash land on a nearby planet.

Once there, the mysterious force reveals itself to be none other than Peter’s father, Ego. He invites the group to hang out on the planet. However, Rocket and Groot remain behind to repair the ship, and make sure Nebula doesn’t try anything funny.

Still upset about the theft of the batteries, Ayesha brings Yondu Udonta and his crew out of exile from the greater Ravager community to fetch the Guardians. They were exiled for child trafficking, and are ecstatic to be back. Yondu and his men head to the planet where they quickly capture Rocket, Nebula, and Groot.

However, Yondu doesn’t want to turn over Peter because he raised him since he was a little boy, and he considers Peter his son. Yondu’s assistant, Kraglin, questions his objectivity, while his lieutenant, Taserface, leads a Nebula-inspired mutiny.

With the ship under his control, Taserface imprisons both Rocket and Yondu, and then releases Yondu sympathizers into space to die of asphyxiation. Nebula leaves the ship to find and kill Gamora because she’s still pissed that Gamora is their father, Thanos’ favorite. Also there’s that little thing where Thanos tortured Nebula, and she blames that too on Gamora.

In the prison cell, Rocket and Yondu form an odd bond while Groot and Kraglin work together to free them. They retrieve the two, and then destroy the ship and its crew as they escape. However, Taserface is able to warn the Sovereign before he dies.

Back on the planet, we find that Ego is a god-like Celestial that can manipulate the matter around his consciousness to form this planet. He further reveals that he projects a humanoid figure to better help him travel the universe to discover a purpose. When he landed on Earth, he fell in love with Peter’s mother Meredith.

Ego hired Yondu to retrieve Peter as a child when Meredith died, but Yondu never delivered on his promise. He’s been searching for Peter ever since that day. Ego then takes the time to teach Peter how to manipulate the Celestial power which is very important to him that Peter learn.

As this is going on, Nebula arrives on Ego’s planet. She tries to kill Gamora, but the pair come to a stalemate, and form an uneasy alliance after they discover a cavern filled with skeletal remains.

Ego recalls his travels around the galaxy to Peter, and that he planted seedlings on thousands of worlds so that he can terraform them into new extensions of himself. The catch is that only two Celestials can activate them.

So, Ego impregnated countless women across the galaxy, and then hired Yondu to collect all his progeny. Ego then killed them when they were unable to access the Celestial power. Under Ego’s influence, Peter helps him activate the seedlings. They begin to transform every world they are on, but Peter refuses to help anymore when he learns that Ego gave Meredith cancer due to the distraction she posed to Peter.

Back at the ship, Mantis, Ego’s naïve empath servant, bonds with Drax, and she warns him of Ego’s plan. Gamora and Nebula show up, also learn of the plan as does Rocket, Yondu, Groot, and Kraglin once they arrive too.

Now reunited, the Guardians find Ego’s brain at the planet’s core, however the Sovereign shows up with their drones to complicate things. During the melee, Rocket makes a bomb using the Sovereign’s stolen batteries, and Groot plants it on Ego’s brain.

Peter tries to fight Ego, using his little Celestial powers he’s learned, to distract Ego long enough for the other Guardians and Mantis to escape. The bomb suddenly explodes; killing Ego and disintegrating the entire planet. Unfortunately for Peter, he loses his Celestial powers once Ego dies. Yondu sacrifices himself to save Peter, and winds up dying in the vacuum of space. Peter finally realizes that Yondu kept him as his own to spare him from the same fate as Ego’s other progeny.

By now, Gamora and Nebula have reconciled, but Nebula still chooses to leave the Guardians. She sets out to resume her quest to kill Thanos all by herself. As the Guardians hold a funeral for Yondu, dozens of Ravager ships show up to acknowledge Yondu’s sacrifice; accepting him back into the Ravager brotherhood.

In a mid-credit scene, Yondu’s sacrifice has inspired Stakar Ogord to reassemble his old team. He brings his wife, Aleta Ogord, and comrades: Martinex, Charlie-27, Krugarr, and Mainframe together to invite them to team back up.

In another mid-credit scene, Ayesha creates a being named Adam that is capable of destroying the Guardians of the Galaxy once and for all.

There’s another one where Peter walks in on a now adolescent-sized Groot playing a video game. He’s disgusted over the mess Groot has in his room. Groot responds in a mocking, “I am Groot” tone; pissing off Peter even more.

In the last post-credit scene, the Watchers walk away from their informant as he tries to get them to stay and listen to one more of his goony adventures. They aren’t having it.