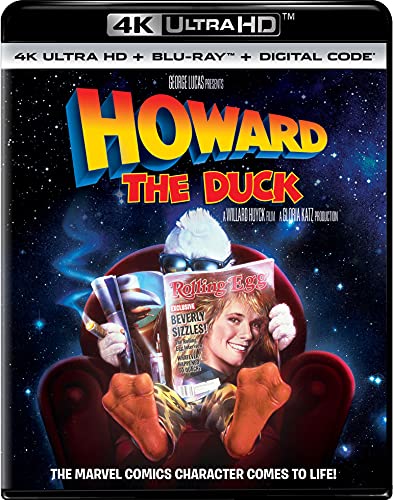 Somewhere floating in the vacuum of space lies the planet Duckworld! On this planet lives your average, run-of-the-mill duck named Howard. One night, while reading his latest copy of Playduck (he is a subscriber after all), Howard gets zapped out of his living room, and hurled light years away to the planet Earth; landing in Cleveland, Ohio.

There he meets struggling musician named Beverly Switzler, and the two form a bond. Beverly agrees to help Howard get back to his home planet. Coincidentally, her friend Phil works for the men who accidentally brought Howard to Earth. They begin to help him out, but when the telescope explodes during the prep to send Howard back, a Dark Overlord of the Universe possesses the main scientist, Dr. Jenning. The ensuing explosion from this accident causes Howard, Beverly, and Dr. Jenning to flee the police.

As the Dark Overlord takes over Dr Jenning’s body, he kidnaps Beverly so she can be another host body for the other Dark Overlords. Now, one mighty struggle for humanity begins.