Hudson Hawk is a cat burglar who is released from prison after a lengthy stint. All he wants out of life is to drink a cappuccino. He has never played Nintendo, but he meets the Mario brothers in a bar he co-owns. They want him to steal a da Vinci artifact that converts lead into gold. He says no, and tries to drink a cappuccino. Eventually, he becomes involved in a world-domination plot that is run by international criminals and aided by CIA agents; cleverly named after candy bars like Snickers, Kit Kat, Almond Joy, and Butterfinger.

Add to this sweet mix, some bad acting, poor plot lines, and something resembling slapstick. Hudson does the only thing he can; bang the nun that sounds like a fish, and try to drink a cappuccino. Against all odds, the big Hawk somehow prevails. He gets the girl (who coincidentally works for the Vatican), and asks her to play Nintendo with him. Hudson finally gets to drink his cappuccino. 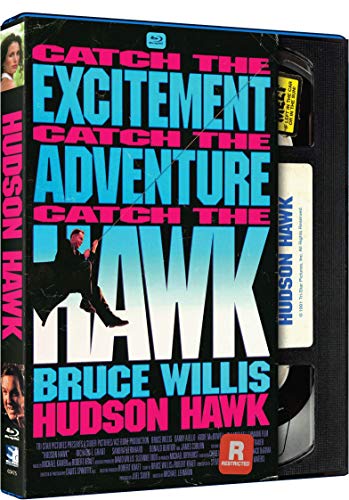 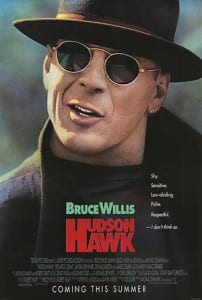 In 1991’s Hudson Hawk, Eddie “Hudson Hawk” Hawkins is a cat-burglar and safe-cracker who just wants to spend a quiet first day out of the slammer drinking a venti cappuccino. Before he gets a chance, his parole officer, the Mario Brothers, and the CIA separately blackmail him into helping them with some art thefts, and Hudson’s old partner in crime, Tommy “Five-Tone” Messina is coming along on the ride.

Behind the scenes, Darwin and Minerva Mayflower, the heads of Mayflower Industries, and their butler, Alfred look to take over the world by recreating Leonardo da Vinci’s La Macchina dell’Oro which can turn lead into gold.

To do this, they need to steal specific art pieces that hide magical crystals the machine needs to function. Artworks like the Maquette of the Sforza, the Da Vinci Codex, and a scale model of DaVinci’s helicopter are scattered around the world with the stones in them.

Working alongside the CIA group is a super-secretive counter-espionage Vatican agency, and they enlist Sister Anna Baragli to help with the Roman portion of Hudson’s mission. However, the Vatican wants Sister Anna to secretly foil that robbery at St. Peter’s Basilica.

Throughout the whole movie, Hudson only wants his damned cappuccino, but never gets it. The Mario Brothers blow up an auctioneer to cover up their theft of the Maquette of the Sforza, and then steal Hudson as well when they toss him in their ambulance.

Hudson needles Antony Mario’s face with syringes; allowing him to escape the ambulance on a gurney. The Mario Bros hunt him down with the ambulance as the gurney speeds out of control down the highway.

Anthony’s face scares the ambulance driver, and he crashes the vehicle; killing the brothers. Now free, Hudson meets George Kaplan, the head of the CIA, and his candy-coded agents, Snickers, Kit Kat, Almond Joy, and Butterfinger. They take Hudson to meet Darwin and Minerva Mayflower.

Soon after, Hudson steals the Da Vinci Codex, but then refuses to steal the scale model of DaVinci’s helicopter. To escape, Tommy Five-Tone fakes his own death, but they are eventually discovered. When the candy-coded CIA agents attack them, Kaplan reveals that he and his agents stole DaVinci’s helicopter anyway, and had no problem killing the guards.

One of Snicker’s explosives misfires, and the explosion kills him and Almond Joy. Hudson and Tommy escape—still no cappuccino for his troubles. Kit Kat and Butterfinger sister-nap Anna, and take her to the castle where the Mayflowers are reconstructing La Macchina dell’Oro.

In an epic showdown to the death between the remaining candy-coded CIA agents, the Mayflowers, and team Hudson Hawk, the film reaches its climax. Minerva Mayflower kills Kit Kat and Butterfinger, but Kit Kat frees Sister Anna before Minerva takes him out. Tommy battles Darwin AND Alfred in a racing limousine, and Hudson takes on George Kaplan on the roof of the castle for cappuccino rights.

Conveniently, Kaplan falls from the castle onto the roof of the limo. Alfred manages to plant a bomb in the aforementioned limo, and escape with Darwin while Tommy becomes trapped inside it. Kaplan hangs onto its hood for dear life as Alfred’s bomb blows up the limo at same time it speeds over a cliff.

Darwin and Minerva use poor acting to force Hudson to piece together the crystals that power La Macchina dell’Oro. Hudson is a quick one though. He omits a tiny piece, and when the Mayflowers activate the machine, it malfunctions and explodes; killing Darwin and Minerva dead. In one last fight, Hudson uses one of Alfred’s own blades to decapitate him.

Hudson escapes the castle with Sister Anna via da Vinci’s flying machine where they spot Tommy waiting for them at a cafe. He managed to escape certain death with the help of the limo’s airbags, and a sprinkler system built into the car. The film ends with smiles for Hudson as he gets the girl… and his cappuccino.