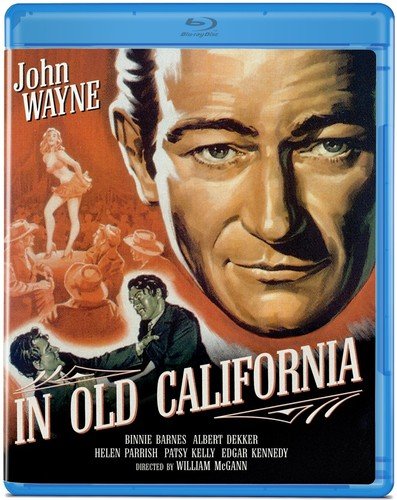 Olive Films has announced that they are adding the western In Old California to their upcoming slate of Blu-ray releases. The film was directed by William C. McGann and stars John Wayne, Binnie Barnes, Albert Dekker, and Helen Parrish. In Old California will be available in stores and online beginning on May 28th.

In the film, Tom Craig (Wayne), a handsome physician in the gold rush days, discovers that Sacramento politician Britt Dawson (Dekker) has become wealthy from forced tributes levied on ranches. Irate and incensed, he leads the ranchers in a successful revolt against the unfair taxes. In retaliation, Dawson viciously taints a tonic prescribed by Tom, and a patient is killed. Dawson hides the evidence and incites the mob into a furious race against Tom claiming he’s an unfit physician. When gold is discovered at Sutter’s Mill, the announcement distracts the crowd, saving Tom from being lynched. How will the local residents feel about Tom when he’s the only doctor in town especially when a terrible epidemic breaks out? Will Dawson still be able to make good on his attempts to destroy Tom? The outcome will have you on the edge of you saddle as the action builds to an exciting conclusion. In Old California was released in May of 1942.

Disclaimer: Affiliate links are contained in this post. This means when you click a link, and purchase an item, Movie House Memories will receive an affiliate commission. Advertisers and Affiliate Partnerships do not influence our content. See our Terms of Use about the inclusion of affiliate links on this site for more information.
April 24, 2013
1 minute read
Show More
Back to top button
Close
Close