The Parrs are back in action! While Helen is called on to lead a campaign to bring Supers back, Bob navigates the day-to-day heroics of “normal” life at home with Violet, Dash and baby Jack-Jack… whose superpowers are about to be discovered. Their mission is derailed, however, when a new villain emerges with a brilliant and dangerous plot that threatens everything. But the Parrs have never shied away from a challenge, especially with Frozone by their side—and that’s what makes this family so incredible. (Courtesy Disney+) 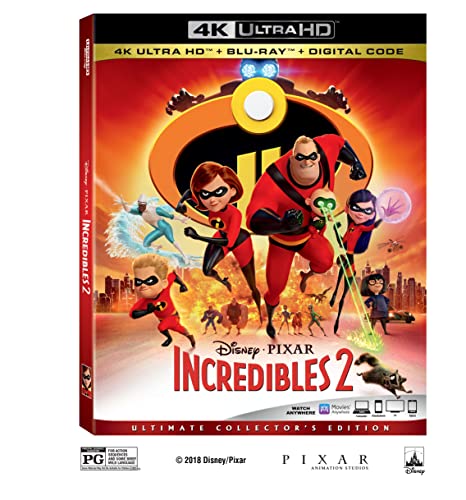 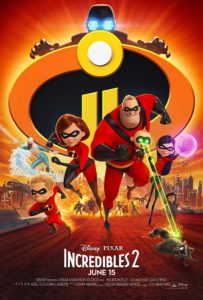 Incredibles 2 picks up immediately after the events of The Incredibles. The Parrs, consisting of Bob/Mr. Incredible (Craig T. Nelson), Helen/Elastigirl (Holly Hunter); their daughter, Violet (Sarah Vowell), son, Dash (Huckleberry Milner); infant son, Jack-Jack (Eli Fucile); and pal, Frozone (Samuel L. Jackson) must defend the city against The Underminer (John Ratzenberger) who’s out to rob a bank using City’s Hall’s destruction as a diversion to pull off the heist. The Underminer successfully robs the bank and gets away while the Incredibles save City Hall but wind up under arrest.

Government officials use all the collateral damage as an excuse to shut down the Superhero Relocation Program which denies the Parrs and other superheroes financial assistance. The family has two weeks at their current motel before they are on their own. To make matters worse, Violet’s love interest from the last movie, Tony Rydinger (Michael Bird) discovered her superhero identity in the chaos. When Bob tells government agent Rick Dicker (Jonathan Banks) about it, Rick brings the boy in for interrogation. He erases Tony’s memory of discovering Violet’s identity, but it’s not an exact science. He accidentally erases his entire memory of her instead.

Meanwhile, wealthy businessman Winston Deavor (Bob Odenkirk) and his sister Evelyn (Catherine Keener) run a media and telecommunications giant named DevTech. Their father was a huge proponent of superheroes, and Winston takes this opportunity to propose secret missions for superheroes which he will record and publicize to regain the public’s trust in superheroes.

He wants to start this public relations campaign using Elastigirl because she has less collateral damage than Mr. Incredible. Bob reluctantly agrees as to participate does Helen. As Elstigirl heads out on her missions, Bob does his best as a stay-at-home-dad. He helps Dash with math; Violet with her boy problems (after Tony forgets her and their date); and Jack-Jack as he discovers all his superpowers. Eventually, Bob finds himself overwhelmed and tired. He takes Jack-Jack to Edna Mode (Brad Bird) to watch him for the night and so she can make a suit to help control Jack-Jack.

As this goes on, Elastigirl comes across an unknown supervillain going by the name The Screenslaver who is able to project hypnotic images via TV screens. Elastigirl’s first encounter with him is when she must prevent him from destroying a crowded commuter train. Then she has to stop his attempt to assassinate Ambassador Selick (Isabella Rossellini) in a helicopter. After this encounter, she gets an idea to track the Screenslaver. Her plan works, and she tracks him to an apartment building. There, she unmasks him, revealing him to be a simple pizza deliveryman who claims to have no recollection of his actions.

Later, Winston throws a party to celebrate the Screenslaver’s arrest. There he announces a summit of world leaders to legalize superheroes which he will host aboard his luxury yacht called the Everjust. However, Elastigirl discovers the pizza deliveryman is not the Screenslaver and that hypnotic goggles were controlling him the whole time.

Evelyn shows up and forces the goggles onto Elastigirl which reveals she’s the mastermind behind the Screenslaver. She restrains Elastigirl in a chair in a freezing cold room which causes her rubbery body to become brittle and she can not escape. Evelyn then monologues a grudge she’s harbored against superheroes since burglars killed her father in a robbery. He died trying to call superheroes for help instead of hiding in a safe room, and her mom died soon after from heartbreak. The reason the superheroes weren’t available was because they were outlawed 15 years prior, but Evelyn blames her parent’s death on humanity’s unreasonable dependence on superheroes saving them in times of need. She will now go to any length to ensure that never happens again.

To do so, Evelyn plans to sabotage her brother (who fully trusts superheroes) and cause a catastrophe that will irreparably tarnish the reputation of all superheroes. In doing so, she can ensure the public never rely on superheroes again. With Elastigirl under her control, she lures Bob into a trap saying something is wrong with his wife.

Once he’s out of the house, she sends a group of hypnotized superheroes to capture Frozone and the Parr children. Frozone tries to protect the kids, but the hypnotized superheroes manage to put goggles on him and get him under control as well. Violet, Dash, and Jack-Jack escape when Dash summons Bob’s refurbished Incredibile and they head for Winston’s yacht to save their parents.

On the yacht, the hypnotized Mr. Incredible, Elastigirl, and Frozone recite a scripted manifesto over live TV which is supposed to paint all superheroes in a threatening light. They then head to the bridge to take out the ship’s crew and aim the yacht straight into the city, destroying the controls in the process.

The kids show up and Jack-Jack is able to remove Elastigirl’s goggles. She then frees Mr. Incredible and Frozone. The Incredibles and Frozone then spread out to free the other hypnotized superheroes before they all work together and turn the yacht away from the city. In the process, Elastigirl arrests Evelyn as she attempts to escape in a jet. With the city safe once again, the world governments make superheroes legal around the world once more.

An unknown amount of time passes and we see Tony sitting in the Parr car next to Violet as part of a date with the whole family heading to the theater. When a carload of robbers goes speeding by them, Violet leaves Tony outside he theater with a promise to be back in time before the film starts.

The Incredibles don their super suits and take chase in their new Incredibile.