Howard Langston is a workaholic mattress salesman who has promised his nine-year-old son Jamie that he will get anything he wants for Christmas. Unfortunately for Howard, Jamie wants an immensely popular Turbo-Man action figure. The forgetful Howard neglects to acquire the toy and rushes out on Christmas Eve to the stores to find it. However, it’s sold out everywhere. Since Howard knows he has let Jamie down in the past, he goes on a quest to track down a Turbo-Man action figure, and will stop at nothing to get Jamie the gift that he wants. 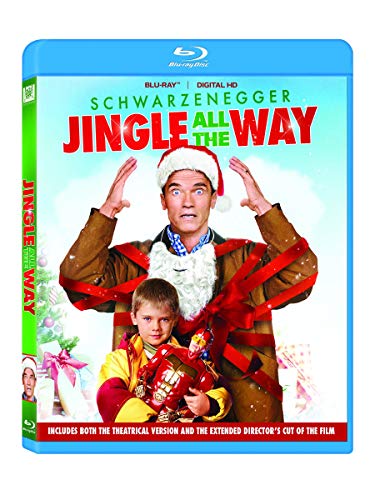 Jingle All the Way [Blu-ray]

‘Jingle All the Way’ Movie Summary 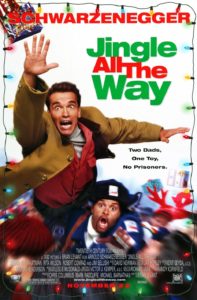 Howard Langston (Arnold Schwarzenegger) is a mattress salesman for the greater metropolitan area of Minneapolis. Howard is a workaholic and often has difficulty finding time for his wife Liz (Rita Wilson) and his nine-year-old son Jamie (Jake Lloyd). Howard loves his family, but finds it difficult to draw lines between his job and home. To make matters worse, Howard finds himself competing with his neighbor and local divorcee Ted Maltin (Phil Hartman) for Liz’s attention. Ted carries unrequited feelings for Liz and does not miss an opportunity to make Howard look bad.

After Howard misses Jamie’s karate class graduation, Howard resolves to redeem himself by getting Jamie’s ultimate Christmas wish, an action figure of Turbo-Man, a toy that Liz told Howard to pick up for their son a couple of weeks before. On Christmas Eve, Howard heads to the stores to purchase the treasured toy, but finds that every store has sold out of the hottest toy of the Christmas season. One thing Howard does acquire is a rivalry with Myron Larabee (Sinbad), a postal worker father who is also seeking a Turbo-Man toy for his son.

Desperate, Howard turns to the black market to try and acquire the heroic figure. However, Howard’s attempt to purchase the figure from a counterfeit toy brand results in a massive fight in a warehouse that is ultimately broken up by police. Howard escapes being arrested by posing as an undercover officer. Ready to surrender, Howard goes to a diner and calls home to tell his wife about his failure. Jamie answers the phone instead and reminds Howard of his promise to be home for the annual Holiday Wintertainment Parade. Howard loses his cool and yells at his son, but immediately begins feeling guilty after Jamie tells his father that he never keeps his promises.

Howard encounters Myron at the diner and they share their experiences over their failures as fathers. Myron tells Howard of his resentment towards his own father for failing to get him a Johnny Seven OMA for Christmas when he was a child. While they are in the diner, the men hear a radio station advertise a competition for a Turbo-Man doll. The possibility of acquiring the doll puts Howard and Myron at odds again which results in the diner phone getting broken. Both men run out of the diner and run to the radio station on foot. Once there, they are both informed by the DJ (Martin Mull) that the competition was actually for a Turbo-Man gift certificate. Due to the men fighting, the police are called to the radio station. The police attempt to arrest Howard and Myron, but they both escape when Myron threatens the officers with a letter bomb, which one of the officers sets off by accident.

Howard returns to his car to return home, but finds that it has been stripped by car thieves and spray painted with the phrase “Merry X-Mas” on the windshield. He returns home in a tow truck and sees Ted putting the star on his Christmas tree. Angered, Howard attempts to steal the Turbo-Man action figure Ted bought for his son Johnny (E. J. De La Pena). However, Ted and Liz catch Howard in the act and Liz has Ted take her and Jamie to the Christmas parade without Howard.

Once at the parade, Jamie and Johnny get out of the car and Ted attempts to seduce Liz. She reacts by hitting him with a thermos of eggnog. Back at the house, Howard remembers his promise to Jamie to go to the parade and decides to go as well. However, he encounters one of the police officers from the radio station, Officer Hummell (Robert Conrad), who begins to chase him around the parade. Howard hides in a storage room to hide from the officer and is mistaken for the actor portraying Turbo-Man in the parade. Howard dresses in the intricate costume to hide his identity.

As Turbo-Man, Howard presents Jamie with a limited edition Turbo-Man, but the action figure is stolen by Myron dressed as Turbo-Man’s arch enemy Dementor. Howard, as Turbo-Man, chases after Myron using his jetpack. Myron is captured by the police, and Howard saves his son. He reveals himself to his family and apologizes for his failures as a father. The police return the toy to Jamie as Myron is arrested. Instead of keeping the Turbo-Man, Jamie gives the toy to Myron for his son, stating that his father is his true hero.

In a post-credits scene, Howard finishes decorating the Christmas tree that night on Christmas Eve. Just as he is putting the star on top of the tree, Liz asks Howard what he got for her. Howard’s face cringes in horror as he realizes that he forgot to get a gift for his wife.