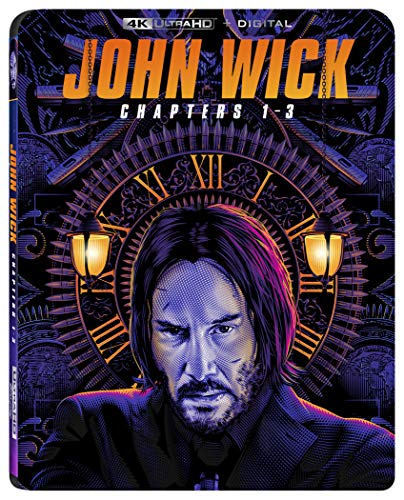 The film that began the John Wick cinematic universe. John Wick is a former hitman who left the criminal world to settle down with the love of his life. However, John’s wife dies from a terminal illness, and the assassin finds himself the victim of a crime when Russian gangsters break into his home and steal his car and kill his dog, the last gift from his wife. Now, John returns to the world of his former life seeking retribution against those that he feels stole the one thing that he needed from the world… hope.

Picking up immediately after the events of John Wick, the legendary assassin is approached by an Italian crime lord named Santino D’Antonio. Santino holds a marker that requires John to follow through with Santino’s request. Santino wishes for John to kill his sister who is being elevated to the High Table, the controlling members of the criminal underworld. After initially refusing, John complies with the request, but he soon finds the entirety of the assassin world on his tail when Santino betrays him and takes a contract out on John’s life to cover up his involvement in the murder of his own sister.

John Wick is on the run after killing a member of the international assassins’ guild, and with a $14 million price tag on his head, he is the target of hit men and women everywhere.

Disclaimer: Please note that this post contains affiliate links. This means when you click a link and purchase an item, Movie House Memories may receive an affiliate commission at no additional cost to you. This bit of compensation helps keep content on our site free of charge to its readers. Advertisers and Affiliate Partnerships do not influence our content. See our Terms of Use about the inclusion of affiliate links on this site for more information.
February 26, 2021
1 minute read
Show More
Back to top button
Close
Close