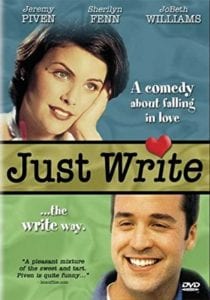 If you are a screenwriter, you MUST watch this!

Think “Notting Hill” for Americans, without the accents or Hugh Grant’s mugging on a much smaller budget. I LOVE “Notting Hill” too, but this movie has its own special merits. It’s been over a decade since I had first watched this wonderful specimen of an indie movie. I loved it the first time I saw it. Loved Jeremy Piven. Loved Sherilyn Fenn. Loved the story idea… The memory made me seek out and find it on DVD. I just watched it again and can say it hasn’t changed in my opinion. It is adorable.

First: For those of you aspiring screenwriters, this is NOT how real Hollywood works. It just doesn’t. This is a fantasy. If it was reality, all prospective writers would be hanging out at the trendy bars waiting for hot stars to walk in and magically make all your dreams come true. Not. Gonna. Happen. That’s my spoiler alert. 🙂 As for the story…

Jeremy Piven plays Harold, a Hollywood tour bus driver who is looooong on movie history, celebrity trivia, and charming banter. He is your perfect “everyman” you WANT to be your buddy and loyal wingman. He’s also the guy who can’t seem to find the perfect girl due to his undying romantic idea that “I love you” means for a lifetime, not just to get a woman into bed. Harold visits a buddy at a bar and, on a bet, starts an unlikely conversation with a rising young starlet (Sherilyn Fenn) who mistakes him for a successful screenwriter. Standard “fish-out-of-water” stuff ensues…

The write-by-numbers formula for this movie has been done before. It’s hard not to see things coming. Nothing earth-shatteringly original. It’s HOW we get there that is the true charm of this movie. As an aspiring screenwriter myself, I could see every hook and turn in the story before it happened. It’s also why everything seemed to work so beautifully to me. I too adore old (and new) movies like our hero.

I identified with him. The two leads were charming and showed real emotions throughout. I have to believe they became good friends after the shoot was completed. And with the possible exception of Elizabeth Taylor, I’ve never seen more incredible velvet eyes as Sherilyn Fenn’s. To see her show emotion in closeups… It’s screen magic.

This is the role that exemplifies Jeremy Piven as an actor. He was perfect. Nobody else could have pulled off the down-on-your-luck, awesome, wingman-waiting-to-lead like he can. Why he’s not a bigger star in Hollywood I’ll never know. He’s just that good to me. And if anyone can show me a better everyman-speed-riff conversational comedian with impeccable timing and charm, please let me know. I’ve never seen that kind of intelligent rambling while still keeping a smile on his face.

In all honesty, I’ve had a mad crush on Sherilyn Fenn since “Just One of the Guys” so anything she’s in is gonna make me melt. This role, however, puts her exactly where she should be — at the top of Hollywood glamour and beauty. She IS the movie star. As much as Julia Roberts was the supposed “beauty” in “Notting Hill”, Sherilyn didn’t even need to try to be stunning. She simply… IS stunning. If her personality in real life is anything like the character, I’d be right there with Jeremy thinking she’s the one — even if she’s SLIGHTLY out of my class. 🙂

The rest of the cast is admirable. I’m not a fan of JoBeth Williams and I thought her Sidney Stone agent character was WAAAAY over-the-top. But others on this Board thought she was great so who am I to argue? Alex Rocco (died only a few weeks ago in real life sadly) plays the overbearing, unsuccessful father. His is kind of the thankless job of pushing his son onto bigger-and-better but never really wanting to cut the apron strings from the family business and the home. The rest of the cast is fairly standard – except for an all-too-brief cameo by Wallace Shawn that, even though unrealistic, made me smile and let me know how much I ADORE the man as an actor. He does the blow-hard “BIG, little man” character better than anyone.

SPOILER ALERT FOR SCREENWRITERS: If you have the DVD (and I’m recommending you BUY THE DVD!!!!), let me say the chapter entitled “Just Write” NEEDS NEEDS NEEDS to be on the top of your inspirational scenes to pump you up to write!! No kidding. It’s that powerful. Once you watch the montage set to the inspiring song, “Change” by Life In General, you will want to watch it over and over and over. It TRULY is a must watch for a screenwriter. If you can’t be inspired to start writing after seeing our untrained, in-over-his-head hero go through his range of emotions while trying to tackle a professional screenplay while set to the PERFECT song to show anguish and hope, you should think of choosing a different vocation.

One note on the cinematography: I can say Hollywood has never looked so lovely. It’s unrealistic how traffic-free the streets are, but the director of photography captured the sets with breathtaking lighting. I know Los Angeles isn’t 72-degrees and sunny 24/7/365, but they sure took advantage of the best days for this little movie.

Even though this indie will pale in comparison to high-priced, heavyweight romantic/comedies of it’s era like “Notting Hill”, I will forever have a soft spot for this little gem. The charm, innocence, and “little man does good” feel-good movie is special. If you are looking for Julia Roberts, Meryl Streep, Brad Pitt or any other number of “superstars”, you will be disappointed by the no-name cast. However, if you want a sweet, surrealistic, feel-good journey into Hollywood’s caste system, please do yourself a favor and watch this movie. It will put a smile on your face. 🙂

A Hollywood tour bus driver poses as a screenwriter to romance an up-and-coming young actress.