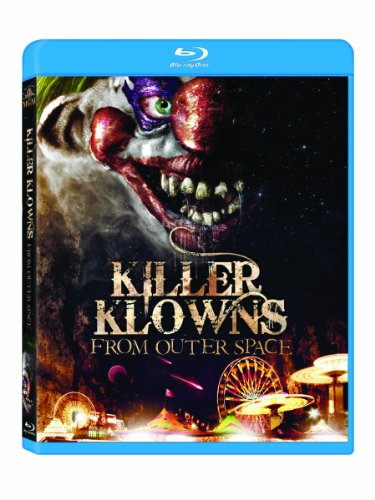 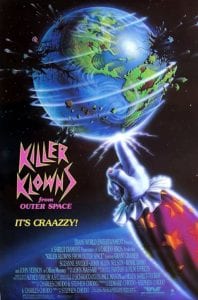 Killer Klowns from Outer Space begins at the Top of the World—a make out point for teens and lovers alike—just outside the sleepy town of Crescent Cove. We meet Mike Tobacco (Grant Cramer) and his girlfriend Debbie Stone (Suzanne Snyder) in the back of his ORV that’s parked next to the other couples making out.

As the two gaze into the night sky, they see a bright meteoroid fall to Earth. Nearby, an old farmer named Gene Green (Royal Dano) also spots the object; only he thinks it’s Halley’s Comet. He takes his dog and heads into the woods to find the impact site. He doesn’t find it. Instead, he comes across a large circus tent, and heads closer in hopes of scoring some free passes. Unfortunately for Gene, some mysterious klowns appear, and they snatch his dog before capturing him too.

We head back to the Top of the World where Debbie convinces Mike to stop sucking face, and go look for what crashed nearby. After a brief search, the two also come across the tent and go inside. They find it filled with wacky walls, cylindrical elevators, and bizarre rooms. However, when they find a large room filled with these strange cotton candy-like cocoons, they go in for a closer look. They find Gene Green inside one…dead. As they start to freak out, one of the klowns spots them, and takes chase. He shoots popcorn at them from his mighty gun which adheres to their clothes. As the two continue to run away, more klowns join in the hunt using a live balloon dog to sniff them out.

They narrowly escape capture, and hightail it to the local police station to report their crazy experience to Debbie’s ex-boyfriend, Deputy Dave Hanson (John Allen Nelson). However, Dave’s grumpy old coworker, Deputy Curtis Mooney (John Vernon) despises these two punks as much as the other local kids that go to the college nearby. He thinks their story is not only a hoax, but they are making it up to waste police time.

Because the two claim Gene Green is dead, Dave agrees to investigate the matter anyway. The three pile into his squad car, and they take Debbie home before Dave and Mike return to the woods. However, when they get there, the tent’s gone. Only a large crater remains where it once was.

Now Dave really doesn’t buy what Mike’s selling, and he immediately places Mike under arrest. As the two head back to the station, they pass through the Top of the World to find all the cars ransacked and abandoned. Dave leaves Mike in the squad car to investigate. He finds a Jeep covered in the cotton candy-like substance Mike told him about. Now believing his story, Dave removes the cuffs from Mike.  The two head back to town to get a hold of the state police for backup.

Meanwhile, back in town, the klowns are busy tracking down the locals and encasing them in cocoons with a special toy-like ray gun. Many klowns even resort to silly pranks and common circus acts to ensnare their victims. Mike and Dave arrive in time to witness one of the klowns use a shadow puppet to swallow a group of onlookers. Once ensnared, they group fits into the palm of the klown’s hand. He tosses them in his magic purse of popcorn, and continues on his way.

Back at the police station, the townsfolk are calling Mooney left and right with reports of klowns attacking them. However, he still thinks everyone is pranking him. Eventually, one of the klowns arrives, and Monney arrests him for the mass hoax. However, a few minutes later when Dave arrives, he finds klown footprints everywhere, and their trail leads him to the lockup where two prisoners are encased in pink cocoons. When he heads back to his office, the klown is sitting there in a chair, and uses Mooney’s dead body like a ventriloquist’s dummy to taunt him. Dave shoots the klown several times to no effect. However, when he accidentally shoots its nose off, the klown begins wildly spinning before brilliantly exploding.

By now, Mike has split with Dave, and he is riding around with his friends, Rich and Paul Terenzi (Michael Siegel and Peter Licassi), in their ice cream truck. They use the PA speaker on it to warn people of the killer klowns. Debbie is alone at her house, and decides to take a shower. However, the popcorn that was stuck to her clothes from earlier has a mind of its own, and as she showers, the pieces transform into little monsters of their own. They attack her as she steps out of the bath. She manages to fends these little darlings off, but she finds more klowns waiting for her outside. One of them traps her in a big yellow balloon for some circus fun later at the ship.

Mike and the Terenzis brothers arrive at Debbie’s house as the klowns drive off. The three take chase in the ice cream truck. Dave spots them all in his squad car and takes chase too. The klowns head to a nearby amusement park where their circus tent has relocated. Dave, Mike, and the brothers go inside to retrieve Debbie. However, the brothers quickly find themselves separated from the group when a trap door opens below them and they plummet into a play pit full of plastic balls. When they stand up, they find themselves eye to eye with two horny klown ladies, and they are ready for some sexy time!

Mike and Dave make it back to the cocoon room where they witness a klown use a crazy straw to drink a dead local’s blood. Once it leaves, they rescue Debbie and hightail it out of the ship. However, the klowns spot the three, and the chase is on. After many pitfalls and booby traps, the three find themselves under a big tent; surrounded by all the klowns. The Terenzis burst through a side wall in their truck while screaming on their PA to leave everyone alone.

It seems to work, but then suddenly, the klowns scurry off as something very large begins descending from the top of the tent. It’s a massive klown marionette named Jojo the Klownzilla (Charles Chiodo). Once it lands, it rips the strings from its body, and attacks the meager humans. Jojo pummels the the ice cream truck, and tosses it into a wall where it explodes, killing the brothers.

Dave tells Mike and Debbie to run out the hole the ice cream truck created while he distracts the mighty klown. As the two flee, Dave empties his revolver into Jojo, but the bullets have no effect, and it grabs Dave. Mike and Debbie make it safely outside as the local state police finally arrive.

The tent begins to frantically spin, and as it rises into the air we see it’s really a large spaceship. We cut back inside where Jojo pulls Dave closer to its face so it can get a better look at him. Dave removes his police badge, and uses the needle from it to pop the klown’s nose. Jojo explodes, destroying the ship and its cargo of humans with it.

As Debbie and Mike look on with the state troopers in disbelief, a klown car falls to the earth. Dave emerges from it along with the Ternezi brothers. (Apparently, the brothers pulled an Indiana Jones and hid in the ice cream truck’s freezer to survive its explosion.) With fireworks from the exploded spaceship all around, the last remaining pies fall from the sky. They hit the three of them in their faces for a happy ending.