Veterinarian Robert “Rack” Hansen is called in to investigate the death of a prize calf of one of the local ranchers. When he cannot determine what the cause of death was, he sends out the calf’s blood for analysis. Shortly afterwards, arachnologist Diane Ashley shows up and informs Rack that the calf was killed by a massive dose of spider venom. The two begin to investigate the source of the spider venom and discover an enormous colony of spiders that threatens not just the local livestock, but the lives of every man, woman, and child in Verde Valley. 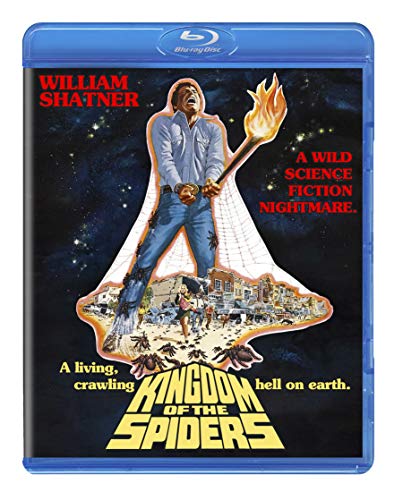 Kingdom of the Spiders [Blu-ray]

‘Kingdom of the Spiders’ Movie Summary 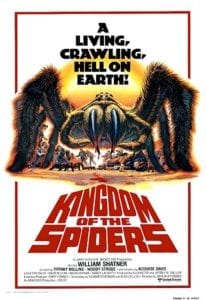 In the small town of Verde Valley, Arizona, veterinarian Dr. Robert “Rack” Hansen (William Shatner) is summoned back to his office when farmer Walter Colby’s (Woody Strode) prized calf suddenly turns ill. Rack takes the calf into his lab and despite his best efforts, the calf dies. To make matters worse, Rack cannot figure out why the calf died. He takes some of the calf’s blood and sends it to a lab in Flagstaff. Colby is upset at the calf’s death, but he is also fearful that whatever killed the calf will require him to quarantine his entire stock.

A short time later, an arachnologist from Arizona State University, Diane Ashley (Tiffany Bolling), arrives in town looking for Rack. She informs the veterinarian that Colby’s calf died from massive doses of spider venom in its blood. Rack is skeptical of the beautiful scientist’s conclusions, but agrees to assist her in her investigation. They examine the carcass and head to Colby’s ranch to look over the land. They arrive just as Colby’s wife Birch (Altovise Davis) finds the family dog dead. Ashley tests the dog’s blood and discovers that it too has died of a massive dose of spider venom.

Rack repeats his disbelief, but Colby tells the two doctors about a spider hill that he found on his property. Colby, Ashley, and Rack go and look at the massive spider hill which is covered in tarantulas. Ashley theorizes that the tarantulas are congregating and converging due to the heavy use of pesticides in the area. She believes that the use of the pesticides has eradicated their natural food supply, forcing the spiders to work together to bring down larger animals. Ashley collects one of the tarantulas to run tests on it. She discovers that the spider’s venom is five times as potent as a normal spider.

Rack and Ashley decide to err on the side of caution and return to the Colby farm that night. As Colby, Ashley, and Rack head towards the hill to burn it, one of Colby’s large bulls stampedes out of his pen and collapses. The bull is covered in spiders and dies a few minutes later. Ashley informs everyone that the spiders would not be afraid to attack people given the chance. Colby douses the spider hill with gasoline and lights it on fire. However, many of the spiders escape the flaming hill from an unseen hole.

The next day, Colby is driving into town alone when spiders begin to crawl and fall all over him in his truck. He is bitten several times and drives off the road, rolling his truck. Rack, Ashley, and Sheriff Gene Smith (David McLean) find the truck and Colby dead inside. Mysteriously, Colby’s body is partially cocooned. When the sheriff goes to inform Birch of her husband’s death, he learns that there are suddenly several more spider hills on the Colby property.

Rack, Ashley, Sheriff Smith, and Mayor Connors (Roy Engel) examine the new hills. The mayor decides to use an extremely strong pesticide to kill the spiders despite Ashley’s warning that the use of pesticide may make things worse. The mayor is concerned that the spiders may scare away many patrons of the town’s upcoming county fair. A crop duster is loaded with the strong pesticide and sent out to spray the spider hills. However, the pilot is attacked by dozens of spiders that were hiding in the plane while he is in the air. Overcome by the venom, the pilot crashes the plane into the town gas station causing a massive fire.

Rack becomes concerned about his niece and sister-in-law, Linda and Terry Hansen (Natasha Ryan and Marcy Lafferty) who live nearby. He drives out to their remote home and finds it overrun with spiders. Terry, the sister-in-law, is already dead, but Rack saves his niece.

Rack, Ashley, and Linda take refuge at the Washburn Lodge owned by Emma Washburn (Lieux Dressler). Sheriff Smith arrives and informs Rack that the spiders are everywhere, and that Verde Valley is cut off. The sheriff tells them that he will head into town and try to call for help. Rack tells Emma to get everyone at the Lodge out of the area. However, before they can leave the Lodge area, the spiders overrun the hotel. Rack, Ashley, Linda, Emma, and the Lodge’s only two remaining guests Vern and Betty Johnson (Joe Ross and Adele Malis-Morey) take refuge in the Lodge’s main building.

Meanwhile, the sheriff returns to Verde Valley to find the entire town overrun by the spiders. The citizens of the town are running around in a panic while being attacked by the spiders. Sheriff Smith is killed before he can call for help when another car crashes into a support post of a water tower, causing it to fall on the police car.

Back at the Lodge, Rack has everyone barricade the windows and doors of the main building. They group fights off the spiders as they attempt to crawl in through the fire place and air vents. Emma repeatedly tries to call for help but finds that the phones are not working. The spiders overload the breaker box causing the building to lose power. Rack proceeds to the basement in the dark to change the fuses. He is successful in restoring the power but is bitten several times by a hoard of spiders. Ashley saves him before he succumbs to the spider venom.

The next day, the Lodge survivors rig up a radio receiver and listen for news of the attacks. They are surprised to hear an ordinary radio broadcast with no mention of the spider attacks. Rack pulls off one of the barricades from the windows and discovers the building is entirely encased in spider silk cocoons. The camera pans out from Verde Valley showing the entire town is covered in silk, waiting to feed the spiders.