In Kiss Kiss Bang Bang, small time thief Harry Lockhart winds up in Los Angeles, California after surprisingly landing a role as a detective in a movie. At a party there, he meets a private eye named Gay Perry. Perry suggests that Harry participate of an investigation he’s working on to better develop his character. Also at the party is a beautiful aspiring actress who goes by the name of Harmony Faith Lane. It turns out that Harmony is a friend of Harry’s beck when they were kids, and a girl whom he had (still has) a huge crush on. In time, Harry and Perry find themselves involved in a convoluted murder case that has them chasing down many leads. With the help of Harmony, the boys discover the truth, and save the day in this Neo-noir! 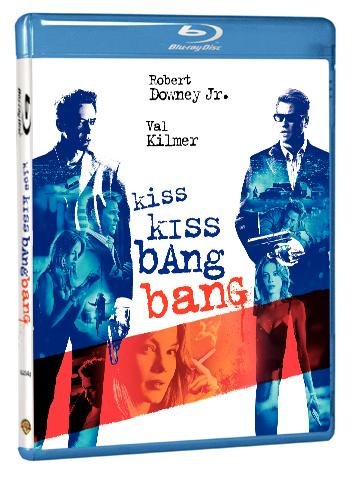 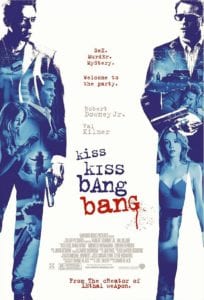 While at a party in Los Angeles, Harry Lockhart recounts the recent events that brought him to LA…

Back in New York, Harry and his partner flee a botched robbery. In an alley, a witness shoots Harry in the arm, and he runs off; leaving his partner in the alley. He evades the police pursuit when he stumbles into an audition. The producers mistake Harry’s remorse for getting his partner shot as method acting. This gets Harry a screen test as a detective in a film in Los Angeles.

On day one, Harry is at a Hollywood party. There, he meets private investigator Gay Perry who’s going to teach Harry a thing or two about being a PI. Coincidentally, Harry’s childhood crush, Harmony Lane, is there. They hang out at a bar for a bit, but he wakes up the next morning in bed with her friend instead of her. This leads him to go to her place the next morning at 6am to apologize. It does not go well.

Day Two, Perry and Harry witness someone drive a vehicle into a lake with a dead woman in the trunk. The killers spot them from from above. Perry used his gun to open the trunk, but his bullet hits the body, so now they can’t report the murder because it looks like Perry did it.

The police contact Harry because Harmony killed herself. It turns out it was her sister, Jenna; not Harmony. Harmony, thinking Harry is a private investigator, asks him to help investigate it as a murder, and he agrees. After she leaves, Harry discovers the dead body from the lake in his shower, and a gun in his bed. Harry and Perry dump the body on a sidewalk, and drive off.

On day three, Harry meets with Harmony to talk about Jenna, and we learn Veronica Dexter is the woman from the lake’s identity. She is the daughter of Harlan Dexter, the host of the Hollywood party Harry attends on day one. The killers were at the party too, and they recognized Harry from it. Harry also learns that Harmony’s stolen credit card was used to hire Perry to come to the lake. That ties Jenna to the same case.

Harry goes to tell Harmony the news, but she’s angry he lied to her about being a private detective, and slams the door on his finger; cutting it off. After getting it sewn back on, Harry goes to a party that Harmony is working, and the killers from the lake spot him.

They kidnap him, rough him up; tearing his finger’s stitches, and then order him back to New York for his own good. As Harmony drives Harry back to the hospital, they spot the killers. She follows them thinking they are going to kill Perry.

She saves Perry, and a food cart owner kills one of the killers. The killer’s pink-haired decoy steals Harmony’s car with Harry passed out in the back, and drives off to a safe house. The other lake killer shows up, and kills her. Harry grabs the gun, and shoots the killer multiple times. His finger falls off again, and he puts it on ice, but a dog shows up and eats it.

Harry and Harmony end up at his hotel room, but they fight when she reveals that she slept with his best friend years ago. He throws her out…but is careful not to slam her fingers in the door.

On day four, Perry wakes up Harry in his hotel room because Harmony has disappeared while following a lead of her own. They head to a private health clinic Harlan Dexter owns, and find that Veronica was incarcerated there while an imposter dropped the court case she had against Harlan.

When the two capture and question a guard there, Harry accidentally shoots him. As they dispose the body, Harlan shows up with a crony, and they capture Harry and Perry. We learn Harlan plans to cremate his daughter to tie up any loose ends.

However, Perry contacts Harmony before Harlan shows up, and tells her to find out where the body is going to be cremated. She finds the place, and steals the van containing the coffin. A chase ensues. Harry and Perry escape, and Harmony tries to get them, but she crashes in front of them.

One of the thugs shoots Perry, and then they drive off. Harlan tries to run Harry down in his car, but Harry shoots and kills him. He then shoots the two remaining thugs who have returned right before getting shot himself.

Harry wakes up in the hospital with Harmony at his side. Perry reveals that Harmony’s sister really did commit suicide, and wasn’t killed. Jenna had escaped he father’s sexual abuse in Indiana, and because she thought Harlan was her real father, when she saw him having sex with his daughter’s imposter, she thought her real father was sexually abusive too. She hired Perry to film the incest, and then killed herself.

Perry, Harry, and Harmony go back to Indiana to bury Jenna. Perry confronts her father who is now bedridden, and slaps him a few times for Jenna.

In the end, Harry works for Perry after losing his role to Colin Farrell, and Perry apologizes to the people in the midwest for saying the word “fuck” so much.