In Lawrence of Arabia, the British government sends Lieutenant T.E. Lawrence to Arabia due to his knowledge of the native Bedouin tribes. They need him to find Prince Faisal, and serve as a liaison between the Arabs and the British in their fight against the Turks. With the aid of native Sherif Ali, Lawrence ignores these orders before striking out on a daring camel journey across the harsh desert to attack a well-guarded Turkish port. 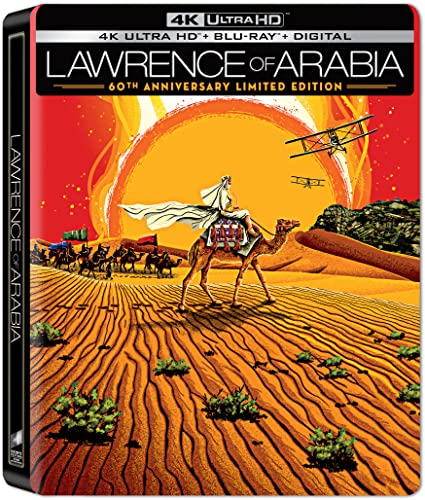 $119.99  in stock
BUY NOW
Amazon.com
*As an Amazon Associate we earn from qualifying purchases. 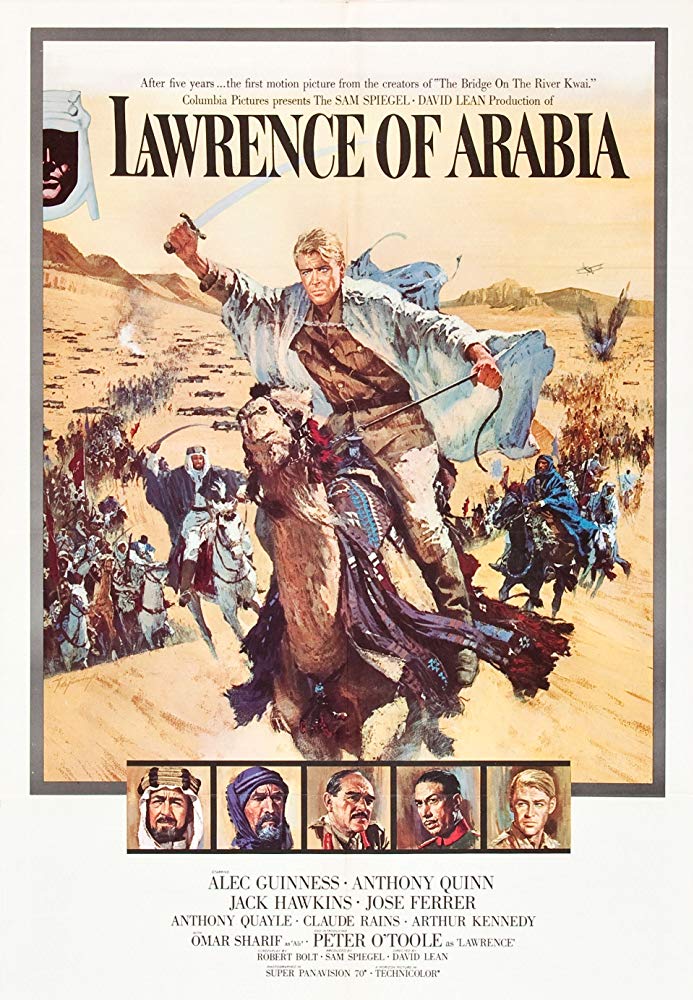 Lawrence of Arabia begins in 1935. We see, what appears to be a young T. E. Lawrence working on a motorcycle before taking a ride in the English countryside. Lawrence speeds along the road before having to suddenly swerve to avoid heading some bicyclists. Lawrence careens off the road and is killed. The scene changes to his memorial service where a reporter tries to gain insights into Colonel Lawrence from the attendees, but other than some political platitudes, no one comments substantially about the man who was “Lawrence of Arabia.”

Flashback to the First World War

The film then flashes back to the First World War. Now, we see an even younger Lawrence who is a British Army lieutenant stationed in Cairo. Lawrence does not get along, nor agree with, his commanding officers. Despite that, he is handpicked for an assignment by a Mr. Dryden of the Arab Bureau, due largely to his intelligence and outspokenness. Over the objections of General Murray, he is sent to assess the prospects of British ally Prince Faisal in his revolt against the Turks.

Lawrence begins his journey with a guide who will take him to see Prince Faisal. Along the way, we are shown how Lawrence has great affection for the desert and its unusual beauty. When the two men stop for water at a well, Lawrence’s guide is killed by Sherif Ali for drinking from his well without permission. Lawrence takes an instant dislike to Ali, unaware of the future that will tie these two men together. Eventually, Lawrence makes it to Prince Faisal’s camp on his own and meets Colonel Brighton, who orders him to keep quiet, make his assessment of Faisal’s intentions, and leave. Lawrence promptly ignores Brighton’s commands when he meets Faisal. Lawrence’s brashness piques the Prince’s interest.

Lawrence proposes to the Prince a daring surprise attack on Aqaba, a coastal town that is heavily fortified from a naval assault, but it not as well defended from the desert side. Apparently, the Turks don’t believe anyone would be fool enough to cross the desert to attack them. A victory in Aqaba would give the Prince some much needed momentum as well as give the British a port from which they could offload much-needed supplies. Lawrence convinces Faisal to provide fifty men, led by a skeptical Sherif Ali. They are also joined by two teenage orphans who attach themselves to Lawrence as his servants.

The Prince’s attack force crosses the Nefud Desert, which Lawrence is told is impassable but he believes can be done. They travel day and night on the last stage of the journey to reach water. One of the men, Gasim, succumbs to fatigue and falls off his camel unnoticed during the night. The attack force makes it to an oasis, but Lawrence turns back for the lost man, despite the protests from Sherif Ali that he will surely die. Lawrence finds the man, near death, and returns to the oasis to the cheers of the Prince’s men. Sherif Ali, won over, burns Lawrence’s British uniform and gives him Arab robes to wear. No longer is he Lt. Lawrence, he is now Lawrence of Arabia.

Lawrence persuades the local leader of the powerful Howeitat tribe, Auda abu Tayi, played by a big nosed Anthony Quinn, to turn against the Turks. However, all the hard work that Lawrence has done to organize his attack force is almost undone when one of Ali’s men kills one of Auda’s men. Ali’s men will not stand by and allow Howeitat retaliation, and Auda’s men will not allow the crime to go unpunished. Lawrence declares that he, as the outsider, will execute the murderer himself to maintain the fragile allegiance. However, Lawrence is stunned to discover that the culprit is Gasim, the man he risked his own life to save in the desert. Despite this, he shoots him anyway. The next morning, the intact alliance overruns the Turkish garrison.

After taking Aqaba, Lawrence heads to Cairo to inform Dryden and the new commander, General Allenby, of his victory. During the journey, one of Lawrence’s young companions, Daud, dies when he stumbles into quicksand. Upon arriving in Cairo, General Allenby promotes Lawrence to major and gives him arms and money to support the Arabs. However, Lawrence is no longer the idealist he once was. He is deeply disturbed, confessing that he enjoyed executing Gasim, but Allenby brushes aside his fears and encourages Lawrence to do his duty. Lawrence asks Allenby point blank whether there is any basis for the Arabs’ suspicions that the British have designs on Arabia. Pressed, the general states they have no such designs. However, Allenby is lying, and Lawrence knows it.

War against the Turks

Lawrence launches a guerrilla war-style like campaign on the Turks. He blows up trains and causes much confusion and delay throughout the desert. Lawrence draws the attention of an American war correspondent , Jackson Bentley, who seeks to publicize Lawrence’s exploits and make him famous around the world. But Lawrence suffers losses on his campaign. On one raid, Farraj, Lawrence’s other young companion, is badly injured when a blasting cap blows up next to his stomach. Unwilling to leave him to be tortured, Lawrence is forced to shoot him before fleeing.

Lawrence’s continues his campaign against the Turks, but his companions begin to lose interest in overthrowing the Turks. Sure that the men will return if he has a large victory, Lawrence presses on with dwindling numbers. Lawrence and Ali enter the city of Daraa on a scouting mission. Lawrence is quickly captured in the enemy-held city and is taken in front of the Turkish Bey. Once there, Lawrence is stripped and ogled by the Bey, probably due to his fair skin and English good looks. After Lawrence strikes the Bey, Lawrence is beaten, and the film implies that he is raped at the hands of the Bey.

Lawrence is thrown out into the street after the Bey is done with him; the Turk leader not knowing who he had in his custody. However, the event has scarred Lawrence, who is traumatized by the experience, and seeks to abandon his campaign and return home. The once mighty Lawrence has fallen, and may not be able to get back up. In Jerusalem, Allenby urges him to support the British’s “big push” on Damascus, but Lawrence is a changed, tormented man, and unwilling to return. Constantly the puppet master, Allenby insists that Lawrence has a destiny, and pushes him to pick up his campaign against the Turks again. Eventually, Lawrence relents, believing that the warriors will come for him rather than for money.

Lawrence returns to the desert and recruits an army, made up primarily of killers, mercenaries, and cutthroats whose only motivation is money. Ali questions the new armies’ dedication to the Arab cause, but Lawrence presses on. On the way to Damascus, the Arab army encounters a band of retreating Turkish soldiers who have just slaughtered the people of the village of Tafas. One of Lawrence’s men from the village demands, “No prisoners!” and charges at the Turk soldiers before being brutally cut down by gunfire. Initially, Lawrence hesitates, but as his men begin yelling for vengeance, Lawrence takes up his own cry of “no prisoners”, giving his permission to his men to cut down the wounded and retreating Turkish soldiers. The battle results in a massacre in which Lawrence himself fully participates, with disturbing relish. Afterward, he realizes the horrible consequences of what he has done, and begins to see that he, like the bloody desert that he stands in, is no longer clean.

Ultimately, Lawrence and his men then take Damascus ahead of Allenby’s forces. The Arabs set up a council to administer the city. However, the Arabs soon find out that it is easy to conquer, but it is difficult to govern. The various tribes argue among themselves and in spite of Lawrence’s insistence, cannot unite against the British, who in the end take the city back under their bureaucracy. Unable to maintain the utilities and bickering constantly with each other, they soon abandon most of the city to the British. Promoted to colonel and immediately ordered home, his usefulness at an end to both Faisal and the British diplomats, a dejected Lawrence is driven away in a staff car.