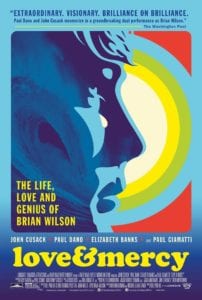 Cusack and Giamatti are spectacular, but Dano is AMAZING!!!

This is a special movie. It doesn’t fit the normal “feel-good” drama genre though. This is one of those movies that pulls you in, let’s you physically and mentally associate with the characters, fills you with hope, beats you over and over again, drains your emotional resources, and when the closing credits appear, feel something long after the end credits are done rolling. In a word – “mesmerizing”.

If I were to pitch this story to Hollywood, my pitch would be nine words: “A Beautiful Mind” meets psychotic Nurse Ratchet in real life. This is the true story of Brian Wilson of the 1960s singing group, “The Beach Boys”. He was/is the genius behind the majority of the success of this phenomenally-gifted musical group with his focus, experimentation with harmonies and instrumentation, and virtuoso mentality. But he paid a heavy, overwhelming price for dedicating his mind to such beautiful music for all to enjoy.

He lost his way in real life and his family in the process… Enter Dr. Eugene Landy. Think Nurse Ratchet from “One Flew Over The Cuckoo’s Nest” without any rules or ethical boundaries. Landy basically threatened, tortured, drugged and controlled every facet of Brian’s life, career, fortune and relationships for at least a decade until someone strong enough and brave enough dared challenge this monster. AND it’s a true story. The terror that gentle soul must have felt…

The movie itself pulls back the “sunny” veil of the All-American Beach Boys phenomenon and basically gives the raw emotion to us in a way very rarely filmed successfully to include the audience in the character’s actually pain and suffering. You will leave the movie physically exhausted from the smothering and dangerous world Brian lived through for so long.

The acting is first-rate on every level. John Cusack and (especially) Paul Dano play Brian over two separate decades – 20 years apart in Oscar-caliber brilliance on both counts. Paul Giamatti is overwhelming in every scene. Almost off-putting actually. But if research is done on the subject, you will find he was deadly accurate in his portrayal of the megalomaniac Landy. He genuinely scares everyone in his path to follow his totalitarian rule – or expect painful, vindictive banishment for life.

Elizabeth Banks is the catalyst ray-of-hope Brian so desperately needs to break the ever-tightening yoke around his neck. The rest of the cast is fabulous. Simply amazing casting all around. Special recognition however belongs with Paul Dano as “Past – Brian”. This is not a slight on the rest of this splendid cast, but this is one extremely rare time I would truly stand up in a movie theater and give an ovation to one person.

He’s simply that perfect. Not only did Dano add 30 pounds to play the role, he literally was Brian Wilson. His studio work alone in the film should garner an Oscar nomination. Nothing against the other fine actors in this year’s Oscar race, whomever they are, but none will hold a candle to Dano’s portrayal. He was breathtaking and heartbreaking all at the same time. It was a performance of a lifetime. Bravo, Mr. Dano. Encore.

The only spoiler I will give is what my wife said after the movie ended… She felt depressed. No matter the ending, it was the emotional toll she felt throughout the entire journey. Just… sad. We both have a new appreciation for the Beach Boys, their music and relationships as a family, and the genius that is Brian Wilson. They are icons in the true musical sense and should be treated as such. I’m thankful I watched this movie. It is an instant classic about how music originates not only on the radio, but in the brain and mostly, in the soul of a genius.

If you can handle a “down” Hollywood movie instead of the plethora of standard “up” stories and/or Marvel movies currently in theaters/on video, give this splendid movie a try. It is heartbreaking. It is moving. It is emotionally draining. And it is a 10 out of 10.

Oh, one last thing… If you rent/purchase the BluRay, after you watch the feature film, DO NOT MISS the Special Feature: “A Side/B Side: Portraying the Life of Brian Wilson”. It will break your heart. It will also allow you to see how iconic the real Brian Wilson is and is thought of by all the actors and production company. It is emotional and raw. And very, very special.

In the 1960s, Beach Boys leader Brian Wilson struggles with emerging psychosis as he attempts to craft his avant-garde pop masterpiece. In the 1980s, he is a broken, confused man under the 24-hour watch of shady therapist Dr. Eugene Landy.