In Mad Max, Max Rockatansky is a fierce cop in a world living on the edge of an apocalypse. As he prepares to run far away from it all with his family in tow, an unfortunate encounter with a motorcycle gang and its menacing leader, the Toecutter, becomes a race to save his family’s life. 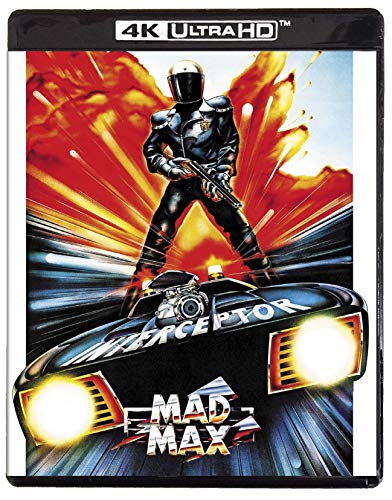 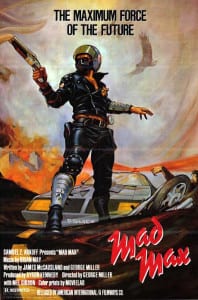 Mad Max takes place a few years from now in the dystopian wonderland known as Australia. Across arid wastelands and lone highways, the escaped cop killer, Crawford “The Nightrider” Montazano, flees police officers at high speeds with no regard for anyone or anything that gets in his way; including a rookie police officer.

While he is able to elude many Main Force Patrol (MFP) officers, Max Rockatansky arrives to put an end to the chase one way or the other. As the MFP’s top pursuit officer, Max to goes head to head with the convict, and rams Nightrider’s car from behind; causing him to careen off the road to his fiery death.

Meanwhile, Toecutter and Bubba Zanetti lead Nightrider’s motorcycle gang on a terror spree at a local town—stealing fuel, destroying property—your basic pillaging and looting ordeal. After they trap a young couple in a car, they take the opportunity to rape the two and destroy the car. The gang leaves Johnny the Boy behind where Max and his partner, Goose, show up to arrest him.

Unfortunately, neither the rape victims nor any of the townsfolk are willing to testify at Johnny’s trial. So, the court has little choice but to close the case and release Johnny into Bubba’s custody; even though Goose furiously objects.

The next day, while Goose visits a nightclub in the city, Johnny takes the opportunity to vandalize his police bike. The gang then follows him down the highway where the bike highsides on him; tossing him from it. While dazed, he’s mostly unharmed, and he’s able to borrow a truck to take his bike back to the MFP. Unfortunately for him, Johnny is nearby, and he tosses a brake drum through the windshield. Goose crashes again. This time, there won’t be any escape. Toecutter demands Johnny set the truck on fire. He does, and the flames burn Goose alive.

Later at the hospital, Max sees Goose’s charred remains in the intensive-care unit, and he loses it. Disillusioned, Max pays his shirtless boss, Fifi, a visit at his home while he waters his plants. Max is ready to quit the force, but Fifi suggests he take a little vacation, and come back when he’s ready. Max admits he’s scared that he’ll turn into one of the crazies they go after.

Vacation time! Max takes his wife, Jessie, and their little boy on a day trip outside the city, but they soon get a flat tire. While Max gets it fixed, Jessie takes the baby to get ice cream. However, the gang shows up, and Toecutter tries to molest Jesse. She kicks him in his land down under, and takes off in the van.

She winds up at May Swaisey’s remote farm with the gang close behind. They ambush Jesse in the woods, but May helps her escape. Back in the van, Jessie doesn’t get far before it overheats. She takes her baby, and tries to escape the gang on foot. However, they quickly catch up, and run the two over. The baby dies instantly, but Jessie is alive long enough for Max to see her in a coma at the hospital.

Max loses it, and flies into a rage before dawning his police uniform one more time. He takes a black Pursuit Special from the MFP garage, and sets out to kill every last gang member. He catches up to them at a bridge where he rams several of them; knocking them off it and to their deaths. He then ambushes and kills Bubba before forcing Toecutter into the path of an oncoming semi. He goes splat pretty damned quick.

Now, it’s down to just him and Johnny. He spots the thug stealing the boots off a dead driver at a car wreck. Max handcuffs Johnny’s ankle to the car, and then uses a time-delay fuse to set the car’s leaking gas on fire. He tosses Johnny a hacksaw to cut off whatever he dares cut, and drives away.

An emotionless Max lets out a smirk when the car explodes behind him, and the film fades to black.

That is Mad Max!