Max Rockatansky wanders the deserted highways of an energy-starved dystopian Australia after eradicating followers of the Night Rider’s. Max finds himself roaming the endless wasteland scavenging for food and precious petrol. Out in the scorched wilderness, Max happens upon a small oil refinery. However, the place Lord Humungus’ barbarian horde of biker warlords, hell-bent on destruction and mayhem lay siege to it. In order to get his hands on as much gas as he can carry, Max must provide a defenseless community with a deserted truck to transport the gasoline to safety. Nothing ever goes as planned out here. 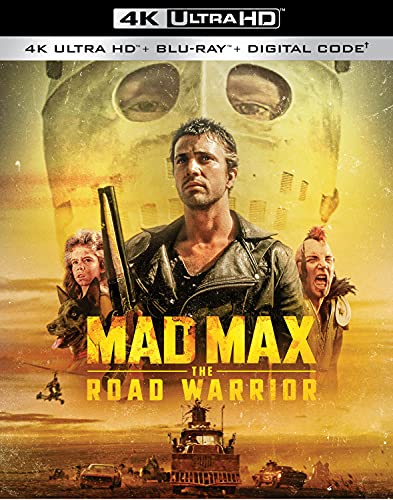 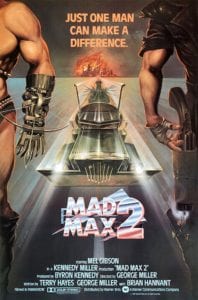 In a desolate world, far from civilized men and uppity Jews, roams an angry, bitter man destined to dole out cute pet names to female police officers, and bleed millions of dollars to gold-digging ex-wives. Even though we don’t need another hero, Mel Gibson finds himself as one, in a crusade against roving gangs of homosexual hoodlums in the Australian Outback. Wearing little more than ass-less chaps, these thugs plug just about anything for a full tank of gas, but our boy Mel knows how to make them put a cork in it, and this is his story.

The Road Warrior begins in an apocalyptic wasteland in the distant future following a global war that has nearly wiped out civilization and everyone’s notion of civility. The world’s supplies of gasoline have been exhausted to the point that men, and pretty much only men, resort to violence and death to keep their vehicles running. Mankind has abandoned law and order in favor of the sort of chaos that is more commonly seen on a Los Angeles freeway on a Friday before a three day weekend.

Max Rockatansky is a former police officer who lost his wife and child to one of those marauding hordes in the first Mad Max film. He now wanders the desolation of the depopulated desert in a scarred and supercharged black V-8 Pursuit Special; his only friend — a Blue Heeler — riding shotgun.

As the film opens, Max, his dog, and that sweet ride of his are being pursued by a “Right Said Fred” impersonator named Wez, and his “girlfriends” who all have darker five o’clock shadow than Jon Hamm at midnight. Wez is a Mohawk maniac who has a penchant for platinum-blonde twinks, long, hard arrows, and male penetration with any utensil.

With his tank nearly empty, Max collects some fuel from an abandoned Mack semi-truck he stumbled across during the chase, and then continues on into the desert void. Eventually, he ultimately finds James Bond’s Little Nellie gyrocopter abandoned in a clearing while 007 is out shagging the neighbor’s sheep.

When Max attempts to check the mini-copter for gas, he is ambushed by a lanky Star Wars reject from episode three who had about as much screen time as Jar Jar. The queer pilot, and that is queer in the odd sense, appears to have the drop on Max, but Max quickly turns the tables on him, and the pilot is forced to plead for his life.

He wisely offers up information to Max about the existence of an oil refinery where Max can get unlimited fuel. Unfortunately, he fails to mention that the refinery is surrounded by the cast of The Hills Have Eyes, and they are led by their own personal Jason Voorhees wearing his summer wardrobe of a ski mask and ball-hugging black leather shorts.

Since this is foreign fare, we are going to call him the Humungus; which is Australian for evil leader. The Humungus also controls Wez’s candy ass, and the two are nearly inseparable (That is until Wez sees a man he really wants, then he goes full balls to get him.)

Max camps out on the highest hill (the only hill) above the refinery, and scouts his enemies for a full day. As Max formulates a plan to get into the compound, and steal as much gas as his car can hold, he witnesses some of the mysterious gas hoarders attempt to make a break for freedom only to get captured, raped, and killed by the bad guys. They should have drank the Kool Aid. It would have been less painful.

Max takes one of the wounded survivors, and uses him as his hall pass to get into the compound. Unfortunately, Max’s pass expires, literally, as does his deal for free gas, when the wounded man he brings back into the camp dies.

Always thinking on his feet, Max offers Pappagallo, the compound’s leader, another deal. Max will retrieve the abandoned Mack semi-truck that he found at the beginning of the film, and bring it back to the gas-clowns, in exchange for his freedom, his vehicle, as much gas as he can carry.

The gas-clowns need the truck to haul the tanker trailer that the settlers use to store the fuel they refine. Palms are spit into and a bargain is struck, and Max sneaks out on foot back to the semi. Along the way, Max joins forces with the helicopter pilot, whom he left chained to a tree stump in the desert.

Somehow, Max is able to drive a partially broken down, and slow-as-hell truck into the compound, evading the Humungus’ men and their high-octane machines. The gas-clowns now love Max, and want him to drive the truck and the tanker out of the camp. However, Max doesn’t want anything to do with them, and pulls a Han Solo on the resistance. He takes his car, his dog, and his gas, and hyperspaces it the fuck out of there.

Unfortunately, Wez is not going to let Max get away from him twice, and when he spots Max, he attacks his car; causing the road warrior to crash over and over again. Wez believes that Max is dead after Max’s booby trapped car explodes. Max, although badly injured, is still alive (his dog on the other hand is not after taking a harpoon to the sternum defending his master).

Max is soon rescued by his partner, the pilot, who brings him back to the gas compound like TC on Magnum PI. Once there, Max has a change of heart, and decides he wants to do anything he can to help the gas-clowns. He offers to drive the truck again, and after some minor posturing, Pappagallo agrees to the arrangement.

Max leads the exodus from the compound in the now heavily armored truck, accompanied by a “Feral Kid” with a boomerang blade, and several settlers in armored vehicles providing as much protection as an Iraqi soldier fighting the bubble gum brigade.

The Humungus and most of his boy band members pursue the tanker, leaving the remaining settlers free to flee the compound in their slow and relatively unprotected caravans and buses. Papagallo and the settlers defend the tanker, but are killed during the chase. Even the pilot in Little Nellie gets shot down.

Everything looks bleak for our heroes as Max and the Feral Kid find themselves alone against the marauders, who are relentless in their pursuit of some hot ass. Max makes the unexpected move of slowing the truck down, and flipping a bitch; effectively driving at his pursuers.

Wez again enthusiastically approaches from the rear, and boards the truck with vengeance in his eyes, but a head-on collision with Humungus’ car kills both Wez and Humungus. Max loses control of the tanker, and it rolls off the road. As the injured Max carries the Feral Kid from the wrecked tanker, he sees not oil, but sand, leaking from the tank.

It is then revealed to both the film audience and Max, that the truck and its trailer are actually a decoy, allowing the other settlers to escape with the precious fuel in oil drums inside their vehicles. I guess Max is not only too dumb to realize that his haul didn’t slosh around like a liquid, but also too blind to see the settler’s bus filled with huge barrels that say, “Danger! Flammable!”

The film ends with the Feral Kid being returned to his tribe, and a narration from his grown up self revealing that the pilot becomes the leader of the gas-clowns (until Thunderdome) and they all make it to the coast, where they establish the “Great Northern Tribe.” However, Max remains in the desert: dog less, alone, a drift; a man unfit for civilized society.