Out in a rural French village, an old man lives on a farm with his only remaining relative. The two men are successful flower growers using water from a spring on an adjoining but vacant property they now own. The grown-up daughter of the previous owner still lives in the hills as a goatherd. She has come to learn that not only did these two men know the existence of the spring when her father was desperately trying to water his crops, but the entire town knew as well, and never said a word. After an accident with one of the goats leads her to the source of the spring, she finds she can exact her revenge on the entire town.

‘Manon of the Spring’ Movie Summary 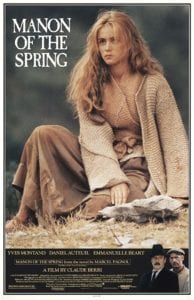 Manon of the Spring is the second part of the Jean de Florette story. A young girl named Manon is the daughter of Jean from the previous film. She lives near Les Romarins where her father’s old farm was located. Manon now lives with elderly squatters. They teach Manon how to live off the land, and she is quite self-sufficient tending to her animals. Since the death of Jean, his old neighbors, Ugolin and Cesar have a built a profitable carnations business using the spring that they hid from Jean.

One day, Ugolin spots Manon bathing nude out in the woods. He develops an instant crush on the girl, and tries to put the moves on her. Of course, Manon rejects him because of his involvement in her father’s breakdown. Thus begins Ugolin’s obsession with her. He eventually sews a ribbon that fell from Manon’s hair into his chest. Meanwhile, a schoolteacher named Bernard arrives to the village, and Manon takes an instant liking to him.

A few days later, one of Manon’s goats falls into a crevice on the mountainside. When she goes inside it to retrieve the goat, she finds the source of the spring that supplies water to all the farms and the village. Manon gets her revenge on all of the people who did her family wrong, and plugs that spring.

As the people grow desperate for water, some begin to blame their troubles on their silence over Jean’s death. Manon accuses both Cesar and Ugolin in public as the source of all of her father’s troubles that lead to his death. Cesar denies the allegations, but a poacher from the village confirms Manon’s story. Panicked, Ugolin asks Manon to marry him, but she shoots him down again, and the two men leave with their tails between their legs.

After this humiliation, Ugolin hangs himself from a tree. Cesar finds him, and laments that his family line has come to an end. Meanwhile, the villagers plead with Manon to help them in a procession to the village’s fountain to apologize to God for their sins over their silence in Jean’s demise. Manon agrees, but beforehand, she enlists her love, Bernard, to help her unblock the spring. The water arrives as the procession stands before the dry fountain.

Bernard soon marries Manon, and as the film comes to a close, we see Manon at a church service on Christmas Ev. She’s very pregnant. Cesar is now alone, and a broken man. He meets with Delphine, an old friend of his, in a courtyard. She returned to the village to tell him that when he left his girlfriend, Florette, as a young man to join the military, she was pregnant with his child. Florette wrote him to tell him the news, but Cesar never received the letter. So, she married another man in a nearby village, and had the baby. He was born a hunchback and named Jean.

Realizing that the man who lived on the farm next to him—the man whom he drove mad for his land—was his son. Ugolin’s suicide broke Cesar, but this realization killed him. Cesar soon dies alone in his sleep. He leaves Manon a letter stating that she’s his granddaughter, and leaves her all his property.