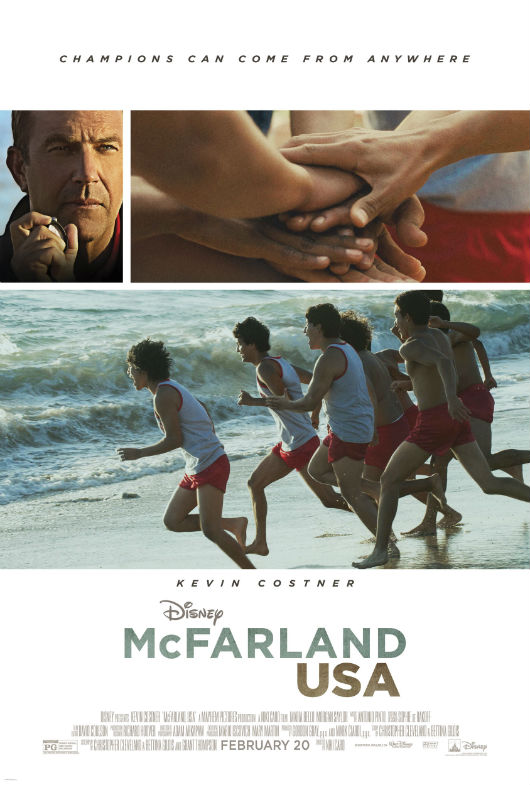 Inspiring look at coaching in a low-income area

Okay, Kevin Costner can do this character in his sleep. His “Coach/Manager/Player who has seen it all” character is standard stuff for him. It’s basically “Bull Durham”, “Draft Day”, “For Love of the Game” all rolled into the same guy. That’s not a bad thing. I like him in those roles. It’s just nothing new. What’s surprising is the plethora of fabulous performances by the kids and townspeople in this terrific little TRUE story. They ROCK this picture. Special recognition to the set designers who created a beautiful location for all the running sequences. It was a rich assortment of landscapes that mesmerized the visual senses on BluRay.

Basic plot: Costner (Jim White) is a football coach at a reasonably successful high school program. Because of a mistake in the opening sequence, the coach is fired and lands in a dead-end town in Nowhere’sville, USA – aka McFarland, CA. The fish-out-of-water family has a few brushes with the local Mexican population where they think being the only (seemingly) white family in the area is a bad idea and are intending on moving immediately. Then Costner sees a kid running a sub-5-minute mile on his way to work in the produce fields with the rest of the population of minority workers in the area.

What follows is fairly standard Disney stuff of our innocent but willing racially-inferior minnows who fight to get better against the racist, elitist killer whales (rich kids) of the other schools. What makes this watchable is how true the story is. Don’t get me wrong. There are some formulaic sequences here. But how they pull it off is worth the cinematic journey. For Disney, I’m proud of them for taking a racial theme and turning it into a positive story for all involved.

I have to say the reason I’m giving this a “7” is because of the EXCELLENT behind-the-scenes stories where the filmmakers interview the runners from the team, along with the real coach, Jim White, and Kevin Costner all at the same sitting. Hearing them reminiscing (the movie is set in 1989), talking about the movie, and showing genuine care and respect for their beloved coach and each other… It’s what a coach could only hope for in the children who grow up to be fine adults. Mr. White created a dynasty of runners that forged an ironclad identity with hope for the future in this nothing town when nobody was giving them a chance. One man can still make a difference on a global scale if you work hard enough. It’s inspiring stuff.

The highest praise I can give this movie: My two teenage athlete children (soccer and baseball/softball) who have watched literally hundreds and hundreds of movies were against it. It was Disney for crying out loud. And a movie about CROSS COUNTRY no less. They would rather watch “Mission Impossible 15” or anything else. These are seasoned moviephiles. But Dad just wouldn’t be denied. 😉 Within the first 15 minutes, they were hooked and enjoyed every minute of the rest of the movie. They even sat through the behind-the-scenes interviews. It was a family experience I won’t forget. Well done, Disney.

As a coach myself, this is the kind of stuff that inspires me to work with kids who don’t have a future in their current situation. And if you’re already a coach, it may open your eyes to kids who have natural talents that may be wasted on something other than where their true skills lie. Much recommended. 🙂