A police lieutenant resigns from the force to track down some big dope dealers involved in killing a couple of police officers including his old partner. 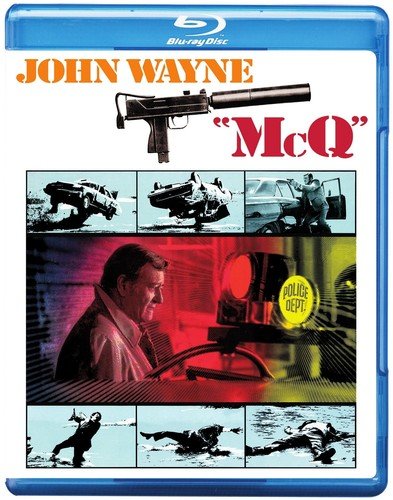 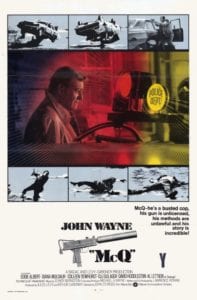 Detective Sgt Stan Boyle guns down a police officer in downtown Seattle walking on his beat. He then leaves and kills another officer walking in a parking lot. When he gives a satchel with the murder weapon to a mysterious man in a car, the man shoots Boyle.

Later that day, Detective Lieutenant McQ (John Wayne) shoots and kills a hit man named Samuels out on his boat. He believes a drug dealer named Manny Santiago is behind the shootings.

McQ decides to tail Santiago to get clues, but when Boyle dies in the hospital McQ opens up a can of whoop ass on Santiago in a restaurant bathroom. His boss, Captain Kosterman, reassigns McQ to a desk duty after the incident, but McQ resigns instead.

He still works the case though with the help of private eye, “Pinky” Farrell, and learns Santiago has hired a group of thugs to steal drugs from Seattle’s police department’s evidence vault. The heist squad manages to steal the drugs, and McQ tails them, but the thieves escape.

McQ then breaks into Santiago’s office, but Santiago and his men capture him. Santiago reveals someone in the police department swapped the drugs with powdered sugar. As McQ realizes this elaborate scheme, he concludes Santiago didn’t have Boyle killed. Santiago lets McQ go, but first punches him in the tummy a few times as payback for his earlier beating.

After McQ visits his informant, Myra, someone with a cheap stocking over his head kills her. The mysterious killers then attempt to take out McQ once again; this time in an alley which results in the destruction of his car. When McQ examines the wreckage, he discovers Boyle placed $2 million of missing drugs in his car’s seat cushions.

This leads to one more dramatic car chase on a beach with Boyle’s widow, who was in on the whole plot, and a battle to the death with Santiago.