Metropolis is a futuristic city divided in two social classes: the workers, who live underground below the machines, and the dominant classes that live on the surface. Maria is the heart and soul of the working class, and she’s looking to find a mediator between the upper class overlords and the workers. When she meets Freder Fredersen who is the son of the Lord of Metropolis, Johhan Fredersen, they fall in love. However, Johhan already wants to put an end to any possible worker uprising, and has a robot created that will pretend to be Maria. This evil Maria will promote a revolution of the working class so he can eliminate them. 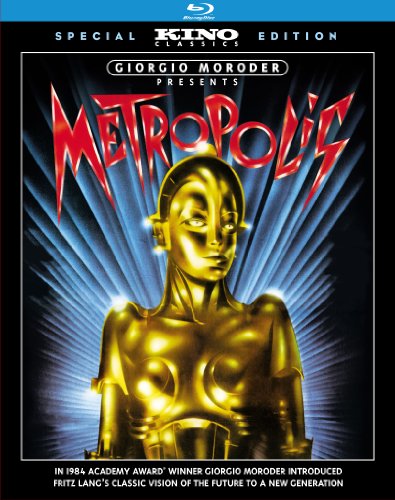 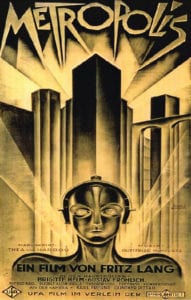 Welcome to the great city of Metropolis in the not-so-distant dystopian future. Wealthy industrialists and business men rule from the tops of arcologies as their employees work insufferable in conditions; operating the machines needed to run the megapolis.

Joh Fredersen it the city’s most powerful man while his son Freder spends his time frolicking at sports and in his own personal pleasure garden. However, the arrival of a young woman named Maria changes him forever.

Maria has brought a group of the worker’s small children to see the lavish lifestyle their rich “brothers” lead. Authorities quickly sweep Maria and the children away, but in that short time Freder becomes enchanted with Maria. So much so, he goes down to the lower levels to find her.

In the city’s underbelly, Freder sees one of its huge machines explode. It kills and injures many workers. Freder has a vision that the machine is actually Moloch, and the city is feeding it with its poor workers. His vision fades away to reveal the dead workers carried off on stretchers. When Freder rushes off to tell his father of the explosion, Fredersen asks his assistant, Josaphat, why he didn’t learn of the disaster from him.

The foreman of the Heart Machine is a man named Grot. He brings Fredersen secret maps authorities found on the dead workers. Fredersen then asks Josaphat why he did not learn of the maps from him. With no good explanation to offer Fredersen for either occurance, Fredersen fires him.

Once Freder sees his father’s indifference to the worker’s conditions, Freder decides to help them himself. Josaphat joins him, and he returns to the machines below. There, he trades places with a worker, and sees how tough the job really is.

Fredersen has his inventor, Rotwang, translate the maps. The two men have a dark history together. Rotwang once loved a woman named Hel. She left him to marry Fredersen, and later died giving birth to Freder. Rotwang spends his time now trying to bring Hel back to life, so to speak, and he shows Fredersen the robot he built to do it.

He discerns that maps are of the elaborate catacombs under Metropolis, and when Rotwang finds an entrance, the two men go searching through some of them. They manage to eavesdrop on a meeting of the workers; one which Freder also attends. Maria speaks to them all, and tells them of the prophesy that a mediator will arrive to unite the working and ruling classes.

Freder believes he’s that mediator, and he professes his undying love for Maria. Fredersen is not pleased, and he orders Rotwang to make his robot looks like Maria in hopes of ruining her reputation among the workers.

However, Rotwang intends to use the robot to kill Freder, and take over Metropolis. He kidnaps Maria, and then transforms the robot into her image. He sends the fake Maria to Fredersen. When Freder spots them in a warm embrace, he becomes distraught not knowing that Maria is fake. The fake Maria goes on to incite the workers to rise up and kill.

When Freder goes back down to the catacombs, he sees Maria inciting them, and he accuses her of being a fake. The workers follow her anyhow, and leaving their children behind, they head for the machine rooms. They destroy the Heart Machine, and the city below begins to flood.

By now, the real Maria has escaped from Rotwang’s clutches, and she, along with Freder and Josaphat, rescue the children. Grot lectures the workers, who are too busy celebrating to realize their children are in grave danger, for leaving their kids alone below.

The workers become hysterical once they realize what they have done, and snatch up the fake Maria, and burn her at the stake. Freder watches from the side; not knowing she’s a fake until he finds her charred remains are not human.

Rotwang has gone mad at this point (he may have already been mad anyway). He chases Maria to the roof of a cathedral, and Freder follows closely behind. They fight as Fredersen and the workers watch helplessly from below.

Rotwang falls to his death, and Freder fulfills his destiny as the mediator. He gets Fredersen and Grot to shake hands; bringing the working and ruling classes together at last.

User Rating: Be the first one !
May 9, 2019
4 minutes read
Show More
Back to top button
Close
Close