Preston, Idaho’s most socially awkward resident, Napoleon Dynamite, lives with his grandma and his 32-year-old brother who spends all his time chatting with babes on the Internet. He tries to help his best friend, Pedro, become the Student Body President title from a popular girl named Summer Wheatley. 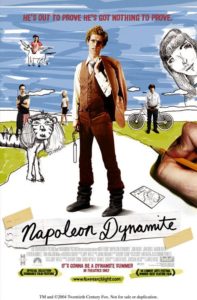 Napoleon Dynamite (Jon Heder) is one of those socially awkward, mouth-breathing, 16-year-old boy in Preston, Idaho. He lives with his grandmother, Carlinda (Sandy Martin), and his older brother, Kip (Aaron Ruell). Kip is a 32-year-old aspiring cage fighter who talks to babes for hours on Internet chat rooms. Grandma, well, she’s a free spirit who is enjoying her twilight years.

Napoleon is a daydreamer who doodles ligers and other fantastic creatures as he tries to deal with various bullies who torment him daily. One is a popular jock named Don (Trevor Snarr) and another is Randy (Bracken Johnson). To cope, Napoleon makes up stories about himself and his many skills like nunchaku skills, bow hunting skills, computer hacking skills because girls only want boyfriends who have great skills.

When Carlinda breaks her tailbone in an ATV accident out on some sand dunes, she asks the boy’s Uncle Rico (Jon Gries) to look after the two while she recovers at the hospital. Rico is a middle-aged man who can’t let his high school football career go. Back in the day he may or may not have been the local school’s star quarterback. Now, Rico lives in a camper-van after his girlfriend dumped him.

While Rico treats Napoleon like a little child, he enlists Kip in his get-rich-quick scheme selling crap door-to-door. Kip, who needs money to bring his Internet girlfriend, LaFawnduh (Shondrella Avery), to town. He agrees to join Rico. Rico, for his part, believes this money will help him get over his failed dreams of National Football League stardom and his breakup with his girlfriend.

Their high school has an upcoming dance, and Pedro asks a popular snob named Summer Wheatley (Haylie Duff) to be his date. She says no, so he then asks Deb. Deb says yes. Napoleon is a bit upset because he has no date, and he kinda like likes Deb. Pedro encourages Napoleon to find someone anyhow, and he then decides to ask the popular Trisha (Emily Kennard) to be his date.

To make her like him, he draws her portrait as a gift. However, it’s unbelievably bad. Unfortunately for Trisha, her mother is one of Rico’s customers. When Rico tells her some very embarrassing stories about Napoleon, Trisha’s mother sympathizes and forces Trisha to accept Napoleon’s invitation. Once at the dance, Trisha quickly ditches Napoleon, and Pedro lets him dance with Deb.

When Pedro spots an election poster at the dance, he decides to run for class president. This pits him against the evil Summer. The two campaigns put up flyers around school and hand out trinkets to buy votes. The boys perform some public service with the Future Farmers of America to help their increase their popularity, but the endeavor fails to do that even though they get some medals for their efforts.

It’s also during this time that Napoleon visits a thrift store and finds an instructional dance VHS called D-Qwon’s Dance Grooves. He immediately buys it to learn dancing skills. Did you know that girls only want boyfriends who have great skills? It’s been said.

Soon LaFawnduh arrives on a bus from Detroit, and she gives Kip a hip hop makeover. When she catches Napoleon dancing in his room, she gives him a mixtape of her own to practice his dancing skills.

Rico’s ongoing sales scam causes trouble for Napoleon because he continues to spread embarrassing rumors about Napoleon to prospective customers. At one point, Rico tries to sell Deb a breast-enhancement product, claiming it’s Napoleon’s suggestion. This causes her to break off her friendship with Napoleon. His get-rich scheme comes to a sudden end when the town’s martial arts instructor, Rex (Diedrich Bader) from Rex Kwon Do, catches Rico demonstrating his breast-enhancement product on his wife.

At a school assembly before the election, each candidate gives a speech before the student body. They are then to perform a skit for them as well. Summer gives her speech asking students, “So, who wants to eat chiminichangas next year? Not me. See, with me it will be summer all year long. Vote for Summer.” She performs a dance skit to a Backstreet Boys song with one of the school’s clubs.

Pedro doesn’t know he’s supposed to perform a skit until this point. Despondent, he gives a poor speech. To save Pedro’s campaign, Napoleon decides to put his new dancing skills to good use. He gives the sound engineer LaFawnduh’s mixtape and spontaneously performs a most awesome dance routine. Napoleon receives a standing ovation from students; leaving poor Summer and Don stunned.

As the film comes to a close, Pedro becomes the class president. Kip and LaFawnduh leaving on a bus for Michigan. Rico reunites with his estranged girlfriend. Grandma returns from the hospital, and Napoleon and Deb reconcile. Cue When in Rome’s The Promise as the two play tether ball.

In a post-credits scene, Kip and LaFawnduh marry in an outdoor ceremony in Preston. Napoleon arrives after the vows, riding a horse. He claims that it is a wild honeymoon stallion that he tamed himself. Kip tosses LaFawnduh’s garter towards Napoleon, Pedro, and Rico. Rico catches it as Kip LaFawnduh ride off for a happy ending.