In Night of the Living Dead, Barbra and Johnny visit their father’s grave in a remote cemetery when suddenly, zombies attack them. Barbra flees to an apparent abandoned farm house. A man named Ben stops at the house with an empty tank of gas, and joins her. Soon the walking dead surround the house, and Ben does his best to secure the doors and windows. However, news reports begin talking of horrible creatures returning to life everywhere. Barbra and Ben are soon surprised to find five people hiding out in the basement: Harry, Helen and Karen Cooper; and a young couple, Tom and Judy. Dissension sets in almost immediately with Harry Cooper wanting to be in charge. As their situation deteriorates, their chances of surviving the night lessen with each ticking minute. 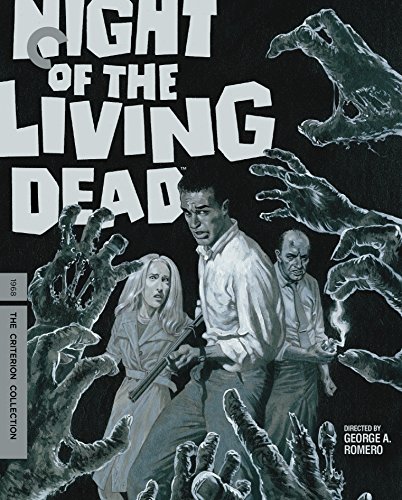 Night of the Living Dead (The Criterion Collection) [Blu-ray] 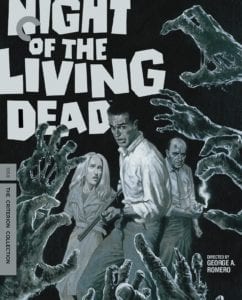 Johnny and Barbara (brother and sister) are visiting their Father’s grave in rural Pennsylvania. Barbara does not like cemeteries. As Johnny teases his fearful sister, taunting “They’re coming to get you, Barbara”; a man can be seen stumbling in the distance. As the man approaches, something appears to be not quite right. The man is actually the first of many zombies in George Romero’s horror classic, Night of the Living Dead.

Johnny is the first victim that we are aware of in the film and Barbara is left to fend for herself. She runs to the car but Johnny had the keys. She puts the car in gear and drifts down the hill. It looks as if she may make it when she collides with a tree. Barbara sets off running. She stumbles upon a farmhouse where she runs into Ben.

Ben has mad survival skills and he boards up the house (with a little help from Barbara) and creates a fortress.

Ben and Barbara exchange stories of how they ended up hiding in a stranger’s home. Barbara becomes hysterical as she shares the tale of Johnny’s fate and Ben must punch her to calm her down. Ben loots the house for weapons and supplies. A radio blares emergency newscasts. There are reports of “unidentified assassins” who appear to be in a trance committing heinous crimes.

Ben and Barbara discover five humans hiding in the basement: Harry, his wife Helen, their gravely ill daughter (Karen), and Tom and his girlfriend Judy.

As the night wears on more and more zombies are vying for a human meal. Ben and Harry argue over the best course of action. Harry wants to stay in the basement but Ben feels that the cellar is a death trap that they will be unable to flee if one or more of the “living undead” breaks into the house.

The group continues to hear radio and television reports that wide spread mass murders are being committed along the east coast. One scientist interviewed on television speculates that the murders are caused by radiation from a space probe. Watchers are instructed that a blow to the head will stop the “murder happy characters”.

A ticker at the bottom of the TV screen provides lists of emergency shelters. Ben wants to make a run for a nearby shelter. An escape plan fails and a fire is accidentally set in the grass outside of the house, which causes a truck to explode killing Tom and Judy. Ben runs back to the house but is locked out by Harry. Ben kicks his way in and after repairing the damage, gives Harry a few punches for his lack of assistance.

The house eerily loses electricity. The zombies then launch a vigorous attack, clawing to get into the boarded shelter. Harry grabs the rifle and threatens to shoot Ben. Ben wrestles the gun back and mortally wounds Harry who then retreats to the cellar where he finds his daughter dead and then passes away himself. Helen descends to the basement and makes the horrific discovery that her daughter is now one of the monsters and is dining on her own Father. The child zombie then murders her terrified mother.

The undead finally break into the house. Barbara spies the corpse of her brother Johnny and succumbs to the zombie hoard. Ben locks himself in the cellar, the only survivor of the group. He shoots the zombies of Harry and Helen.

In the morning, a posse approaches the farmhouse and kills the remaining monsters. Ben hears the rescuers, but is shockingly shot as he emerges from the basement. His corpse is taken from the house and burned with the zombie remains.

The film ends with still photos of the clean up and corpse burning bonfire.