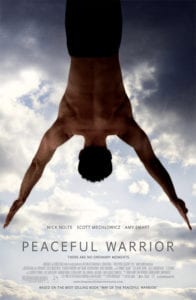 Based on the bestselling book by Dan Millman, “Way of the Peaceful Warrior: A Book That Changes Lives.” This is a movie I really wanted to like. The story of an elite athlete that overcomes a potentially life-altering injury only to triumph in the end through perseverance and inner-healing, based on true events? Nick Nolte as the wise teacher and Amy Smart as eye candy? How can you not cheer for this?

Don’t get me wrong. This is a decent movie to watch for an evening. It’s above-average as a story compared to most dreck being thrown at us recently. However, the point of a movie where your protagonist grows and matures from a spoiled, entitled brat into a mature, enlightened warrior would be perfect… If the actor playing the lead wasn’t so pompous and arrogant through the entire movie. Scott Mechlowicz as “Dan” fits the opening with his spoiled, naturally-gifted, “me-first” athlete perfectly. His arrogant elitism sets up the character as someone who needs to take a fall to bring much-needed humility. However, as the story unfolds, the actor does not become an empathetic character. He’s still unlikeable.

Question: If you had Ghandi, Buddha, or Jesus Christ inspiring you personally to overcome your demons, showing you ways to open your mind and experience “the moment” in ways you had never imagined, wouldn’t that make you into a much calmer, wiser, more APPROACHABLE person? I didn’t see that in the actor’s portrayal in the end. He pretty much stayed the same throughout. I see where the direction and the story took us along that path. But I believe the actor missed in his portrayal. I guess that’s my biggest issue with the movie.

Nick Nolte, on the other hand, is fantastic as “Socrates”. His “Mr. Miyagi”-themed character couldn’t be better cast or acted by the veteran thespian. Grizzled, world-weary, and wise beyond his advanced years is perfectly woven into his character. Amy Smart is underused and fairly simplistic in the story. She’s adorable, but the fact she knows about Socrates – who may or may not be real – and she is obviously part of the real world is a little confusing. For Amy’s character to fall for such a self-absorbed Dan, even after he’s explored warrior training, is kind of a stretch. She’d have to be smarter than that. And if she isn’t, then she wouldn’t have been part of Socrates’ world. The rest of the cast is fairly vanilla and only there to extend the story.

This movie has a great premise. It’s really a college version of “Karate Kid”. Although it must have been shot on a low-budget by all the dark lighting and painful rain machine goofs, and the obvious body-double on the rings, it is pretty enough to look at. Nick Nolte and Amy Smart make the story watchable but the main character’s off-putting ego tarnishes the end result. I give it a 7 out of 10. It’s worth watching for the message and for Nolte. Just don’t expect Oscar performances by anyone not named Nick Nolte. I think I’d rather read the book this movie is based upon.

A chance encounter with a stranger changes the life of a college gymnast.