After a fight with his wife, Scott Henderson heads to a bar to drown his sorrows. There he strikes up a conversation with a mysterious, despondent lady who agrees to accompany him to a show uptown but withholds her name. Arriving home, Scott is met by grimly countenanced cops – his wife has been strangled with one of his neckties and he is the prime suspect. He has a solid alibi but his theatre companion is nowhere to be found and no one remembers seeing them together. When Scott is charged with murdering his wife, it falls to his devoted secretary Kansas to find the phantom lady and save Scott from the electric chair… 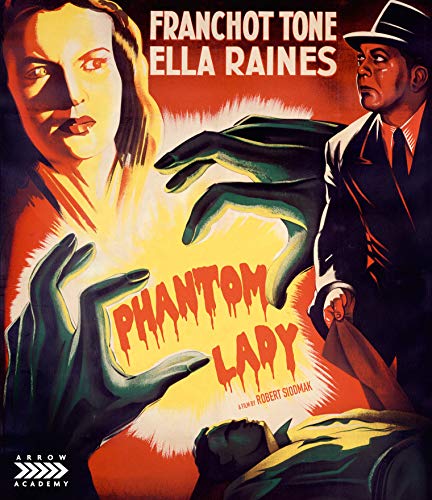 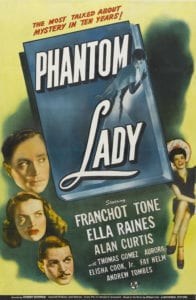 Robert Siodmak’s Phantom Lady begins with a miserable Scott Henderson sitting alone at a bar. He planned to take his wife to see a Broadway show for their anniversary, but after a fight with her, she refused to go.

Scott strikes up a conversation with an equally miserable woman sitting next to him. While she refuses to tell him anything about herself, including her name, she agrees to go see the show with him.

At the show, the star performer, Estela Monteiro, becomes visibly angry on stage with Scott’s phantom lady when she notices the two are wearing the same custom hat.

The show ends, and Scott drops the phantom lady off at the bar where they met, then returns home. There, Scott finds Police Inspector Burgess and his men waiting in his apartment to question him. His wife’s dead in the next room from strangulation, and the killer used one of Scott’s ties to do it.

They question Scott about his wife’s murder, and he tells them about his evening with the phantom lady, but can’t provide any details about her. The next day, he and the police talk to the bartender from the bar, a taxi driver and Monteiro about Scott’s alibi , but none of them claim to remember him with a woman from the night before. Scott at this point only has an extremely vague description of the woman which doesn’t help his cause either.

With no alibi or witnesses, the police charge Scott with the murder of his wife. They try and convict him of murder; sentencing Scott to death.

Meanwhile, Scott’s secretary, Carol Richman, who’s secretly in love with him, decides she will try to prove his innocence since nobody believes him. She returns to the bar where Scott met the phantom lady. Night after night she goes and stares at the bartender. Her continued presence unsettles him.

One night, Carol follows him home after the bar closes, and he finally confronts her in the street. When things get heated, some bystanders jump in to restrain him. He breaks free from them, and runs into the street where a car hits and kills him. However, Carol learns from the confrontation that someone paid the bartender to say Scott was alone on the night in question.

Carol returns home to find Police Inspector Burgess waiting in her apartment to talk to her. He believes only a fool or an innocent man sticks to such a weak alibi, and he doesn’t think Scott’s a fool. He offers to help Carol prove Scott’s innocence in an unofficial capacity.

Burgess gives Carol the name and description of the slimy orchestra drummer, Cliff Milburn, that kept staring at the phantom lady the night of the murder. Carol dresses like a 1940’s harlot, and heads to the show. She seduces Cliff, and he takes her back to his place where Carol tries to get any information out of him she can.

A drunk Cliff brags that a man paid him $500 to deny seeing Scott with a woman at the show. Unfortunately for Carol, her plans goes awry when Cliff knocks her purse to the ground, and he finds Burgess’ police report with his information on it. Carol desperately runs out of the apartment, and heads to a deli across the street to call Burgess for help.

Back at Cliff’s apartment, Scott’s best friend, Jack Marlow, who left to South America for a work trip the night of Scott’s wife’s murder, shows up, and strangles Cliff to death. The next day, Jack finds Carol, and offers to help her find the real killer of Scott’s wife. Carol welcomes Jack’s help, not knowing he’s really her killer.

Carol learns a woman named Kettisha designed Estela Monteiro’s hat. She and Jack question Kettisha about the possibility of the hat being duplicated, which she says is impossible. However, one of her employees, admits copying the hat for $50. She provides Carol and Jack the phantom lady’s name and address. Unfortunately, another case calls Police Inspector Burgess on a quick trip to Philadelphia, so Carol and Jack go alone to visit Ann Terry, Scott’s phantom lady.

There, the two find Ann under the care of a doctor after becoming emotionally unstable due to her fiancee’s sudden death. Ann doesn’t provide Carol with any helpful information, but Carol does spot Kettisha’s hat Ann was wearing the night of the original murder. Ann gives Carol the hat, and she and Jack head back to town.

Jack’s pretty nervous at this point, and he suggests they head back to his apartment to wait for Burgess. Back at his place, Carol goes to freshen up in the next room while Jack reclines on a couch; feigning a headache.

In the bedroom, Carol discovers her missing purse with the note containing Cliff’s police information. She left it in his apartment her rush to get free from Cliff. She realizes the only way it could be at Jack’s apartment is if he was there too. She concludes that Jack is the person who killed Cliff.

Carol fearfully returns to the next room. Jack gets up, and slowly walks towards her to strangle her as well. Jack reveals the night of Scott’s wife’s murder that she refused to run away with him to South America. In a rage, he strangled her when she admitted to him that she was only toying with him over the affair they were having, and that she didn’t love him.

As Jack inches closer to strangle Carol, Burgess shows up, and breaks down his apartment door. In the commotion, Jack manages to jump out the window, and falls to his death.

We cut to sometime later where Scott’s a free man, and back to work as an engineer. Carol is once again his secretary. He asks her to listen to his messages on his dictaphone while he heads out to work on a project. As she listens to him dictate the day’s work, Scott returns his love for Carol in the message. It will be dinner for the two of them for the rest of their lives.