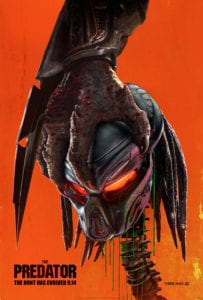 As an early teen going to the movies in the late 80s was the definition of heaven for an already designated film tragic, and Arnold Schwarzenegger was on the top of my must see list in whatever he might have appeared in…from Conan to Terminator. I even enjoyed the underappreciated Raw Deal which incidentally was completed in 1986, but released 1987 due to counteract the massive success of Predator.

As a kid, these over-the-top action movies were fantastic, eye opening adrenaline. Jean Claude Van Damme was developing his muscles from Brussels screen persona. Sly Stallone as Rocky was conquering the Russians, while his flag-waving arrow expert, Rambo, was in full swing; rescuing forgotten Vietnam vets, and Chuck Norris held firm against anyone.

1987’s Predator was developed over a long period with various blueprints on the science fiction elements in a cocktail with brutal army action adventure. There were problems with the suit design, and a change in the Predator’s actor (JCVD himself began to film inside it but was replaced).

Acclaimed cinematography by Aussie Central Coast local Donald McAlpine, got true grit authentic filming on thick Mexican locations to be part of the films appeal. Of course, the explosive action and divine stand off between Arnie vs creature was pinnacle. Limited one-liners maintained some seriousness, although 80s tropes still remained. Defying 20th Century Fox expectations it a hit, it’s now considered a classic.

Listen to the Lunchtime Movie Review of Predator (1987)

No Arnie to see here although he was asked. Luckily, Terminator 2: Judgement Day took preference. Set in the ‘future’ 1997 when loud Jamaican gangs are taking over the Los Angeles streets as a Predator cluster impacts on both criminals and innocent bystanders, in comes Danny Glover; a police Lieutenant going head to head with the alien invasion. Not great on plausible action or story, however there’s some fine explosions and foot chases through the chaos. Not received well at the box office although it has since grown in stature by some legacy fans. Good B-grade cast and Bill Paxton does try. The motivation is low except for a major pop culture reference, Xenomorph (Alien) skull on a shelf.

The long anticipated standalone addition to the multilayered universe has the Predator tougher than he’s ever been. Adrian Brody is a mysterious mercenary leading a group of mixed elite individuals suddenly, literally dropped together on a planet that ends up being a hunting ground for Predators. Moody, underappreciated solid action yarn has great visuals and interesting cast in a truly cool mostly unpredictable gripping cat and mouse thriller. Lawrence Fishburne and Danny Trejo successfully cameo in the best Predator film since the original. Seek out the Blu-ray!

Not too bad considering the hype I’ve had within myself since Director Shane Black (an actor in the original and certified Hollywood action filmmaker) said he was taking the reigns. Although ultimately disappointed through a convoluted plot, effects are good, acting efficient, including impressive Australian Yvonne Strahovski. Just so much promise to revive the legacy, it’s messy with limited excitement