The Umbrella Corporation’s deadly T-virus continues to ravage the Earth, transforming the global population into legions of the flesh eating Undead. The human race’s last and only hope, Alice, awakens in the heart of Umbrella’s most clandestine operations facility and unveils more of her mysterious past as she delves further into the complex. (Courtesy of Sony Pictures)

*As an Amazon Associate we earn from qualifying purchases. 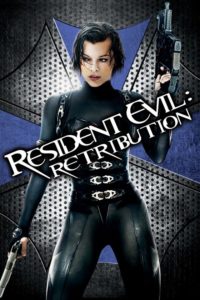 Picking up where Resident Evil: Afterlife ended, Alice (Milla Jovovich), Chris Redfield (Wentworth Miller), Claire Redfield (Ali Larter), K-Mart (Spencer Locke), and dozens of others are attacked by Umbrella Corporation forces while on the freighter Arcadia. Umbrella forces are led by Alice’s brainwashed former ally, Jill Valentine (Sienna Guillory), who orders her soldiers to kill many of survivors on the ship and capture Alice. The fates of Chris, Claire, and K-Mart are unknown.

The film then jumps to a suburban neighborhood where Alice is living with her husband Todd (Oded Fehr) and their deaf daughter Becky (Aryana Engineer). Zombies suddenly attack and Alice flees with Becky in tow. Todd is killed. Alice and Becky are assisted in their escape by Rain Ocampo (Michelle Rodriguez) who helps drive them away until Rain’s car is turned over in an accident. Rain is knocked unconscious, and Alice hides Becky inside another house. Alice is killed moments later by a zombified Todd.

A short time later, the real Alice awakens in an underground facility and is interrogated by Jill. A power failure occurs which allows Alice to escape her cell. Alice finds herself in a simulation of Shibuya Square, Tokyo where the T-virus initially spread out of control overseas. Alice fights her way through an army of zombies and finds herself in a control room. There, she encounters Ada Wong (Li Bingbing), an agent of Albert Wesker (Shawn Roberts), the sworn enemy of Alice. Wesker appears on the computer screens and informs Alice that he and Ada no longer serve Umbrella.

You were the only one to successfully bond with the T-Virus, to fully realize her powers. Well, now I have need of you. The old you. So, I’ve given you back your gift. You are the weapon. Albert Wesker (Shawn Roberts)

Wesker states that he has assisted Alice in her escape so that she can help stop a reactivated Red Queen (Megan Charpentier), who now controls Umbrella. Wesker informs Alice that the facility that Alice is imprisoned in is underwater in Kamchatka, Russia. The facility was created by Umbrella for manufacturing clones and creating simulated outbreaks to show the effect of the T-virus.

Wesker informs Alice that she and Ada will need to rendezvous with a rescue team that is arriving at the surface of the station. The rescue team consists of Leon S. Kennedy (Johann Urb), Barry Burton (Kevin Durand), and Luther West (Boris Kodjoe), one of Alice’s partners from the last film who survived the outbreak in Los Angeles. The rescue team plants explosives near the entrance of the facility, which will automatically detonate in two hours to ensure the destruction of the station. Alice and Ada must travel through several simulations to reach the rescue team. In the suburban simulation, Alice and Ada discover Becky, who mistakenly believes that Alice is her real mother. Alice immediately bonds with the young girl and promises to protect her.

Jill catches up with Alice and Ada in the suburbia scenario. Jill is accompanied by cloned versions of Alice’s former allies, Carlos Oliveira (Oded Fehr), an “evil” Rain Ocampo, and James “One” Shade (Colin Salmon), who are sent to capture or kill Alice. A shootout arises, and Ada realizes that one of them needs to stay behind. Ada gives Alice her smart glasses and her grappling hook so that Alice and Becky can find their way out. Alice and Becky move into the Moscow simulation where they encounter the “good” clone of Rain from the suburban scenario. Alice gives Rain a gun to protect Becky, and then heads off to find the rescue team.

Alice finds and rescues the surviving members of Leon’s group who are pinned down in the Moscow simulation. The rescue team and Alice’s team head toward the exit tunnel and reach the submarine pens in the facility exit. They are ambushed by Jill’s team. Becky is captured by a Licker, and the “good” Rain is killed trying to protect her. Alice splits off from the group to save Becky. She kills the Licker with a belt of grenades. Barry is injured and sacrifices himself to allow the rescue team to escape. The facility is destroyed with Leon’s bombs just as the team escapes. The bombs flood the facility and all the scenarios.

On the surface, the rescue team’s escape snowmobile is knocked over by Jill’s team’s submarine which cracks the ice and surfaces. Jill and “evil” Rain hold Ada hostage. Jill and Alice begin fighting each other, while Rain injects herself with a parasite that makes her stronger and near invulnerable. Rain fights Leon and Luther. She knocks out Leon and kills Luther. Alice rips the mind-controlling scarab off Jill’s chest which returns her to normal. Rain confronts Alice, who realizes that the enhanced Rain is too powerful for her. Alice shoots the ice out from under Rain, and she is dragged down under the ice by swimming zombies from the sunken undersea installation.

Alice, Jill, and the other survivors are taken to Wesker’s headquarters at the White House in Washington D.C. Wesker injects Alice with the T-virus, restoring her superhuman abilities. Wesker explains that the Red Queen is trying to wipe out humanity. Wesker explains that everyone at the White House base are all that remains of the uninfected humans on the planet. The camera pulls back to show the U.S. Military forces working alongside the remaining Umbrella Corporation forces in a last stand for humanity against the T-virus monsters in the world.