An evil man named Kincade controls the area’s water supply, and is looking to force the ranchers to pay for it at exorbitant rates. Government Agent Saunders has a plan that will open up the lost river and dry up Kincade’s supply. To do it, he gets the ranchers to insist on a clause in their contract with him that Kincade’s land will revert to the public if he fails to deliver water. 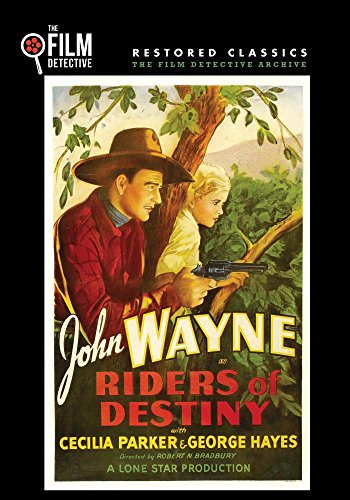 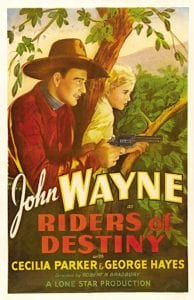 Riders of Destiny begins with Singin’ Sandy Saunders (John Wayne) moseying into a western town. He’s on horseback while strumming his six-string guitar and singing a song because that’s what Singin’ Sandy does!

Saunders stumbles upon a local sheriff who has been shot in the back, but is still alive. That sheriff, Bill Baxter, deputizes Saunders who then sends him off to another town to get his injuries attended to.

Saunders continues on down the trail, and finds two stagecoach drivers, Bert and Elmer, shooting a horse, and the rider tumbles to the ground. That rider turns out to be Fay Denton, the daughter of Charlie. She’s been forced to rob the stagecoach before James Kincaid’s men can steal the money that’s rightfully hers and her father’s.

Once in town, James Kincaid becomes suspicious of Saunders because he wants to speak to the sheriff. Kincaid is the one who ordered Baxter’s murder, and when Saunders says he knows that the sheriff will return, it draws Kincaid’s ire. He has his men follow Saunders to see who he is and what he’s up to.

Kincaid is the town’s greedy landowner. He controls almost all the water in the region, and is trying to buy everyone’s land before his water rights contract expires the next day. The land owners refuse to sell for Kincaid’s lowball offer, and are waiting to hear back from the government to see if they will send someone to investigate Kincaid’s misdeeds.

Charlie is the only other landowner with any water on his land, and when Saunders examines it, he can hear water flowing inside the well. He determines that Charlie’s well is actually the headwaters of a river.

By this time, the contract between Kincaid and the landowners expires, and they refuse to sell because they have word the government has sent an agent to investigate their claim. Kincaid now refuses to let anyone use his water, and orders his men to shoot any man who comes near his dam.

The landowners switch to Charlie Denton’s well for water, but that will only last so long. On the first haul from his well, Kincaid’s men kill the wagon’s driver, and try to steal it. However, Saunders is there to scare them off and commander the wagon. He rides it into town to a hero’s welcome.

Saunders’ meddling is too much for Kincaid. He brings Slip Morgan in to take Saunders out. The men meet in the middle of the town at high noon. One of the townsfolk recognizes Saunders as Singin’ Sandy, the most notorious gunman since Billy the Kid. When Fay asks if he’s a killer, he says yes, and she’s a bit disappointed.

Sanders stands toe to toe with Slip. “Make it fast, Slippery,” he says. “This is your last draw.” Saunders then shoots Morgan in both wrists, but he doesn’t kill him. However, Morgan will never handle guns again.

Kincaid is a forgiving man. He now wants a word with Saunders, and hires him as his protection. Saunders takes the job, and then convinces Kincaid to just dynamite Danton’s well instead of selling the land for top price. With no water, he’d be forced to sell for cheap. Kincaid agrees, and orders Bert and Elmer to do the deed.

While Kincaid talks to his boys, Saunders convinces the landowners to actually sell their land, but have a clause put in that if Kincaid fails to be able to produce the water for any reason, his land and water rights will become public domain. They agree to the plan, and then Kincaid agrees to their request.

Meanwhile, Fay has eavesdropped on Saunders and Kincaid’s conversation, and is horrified at Saunders’ betrayal. She rushes home to tell her father, and when Saunders shows up, the two confront Saunders for killing Sheriff Baxter and selling them out.

Bert and Elmer blow up Denton’s well while they are all talking, and the men quickly realize they made a mistake when the water starts bubbling out the well and into the dry riverbed. Saunders was right after all. That well is the headwaters of a river, and blowing is up diverts the water away from Kincaid’s dam. That means with the new contract signed, his dam is now in the public domain, and Kincaid is ruined.

Saunders tells Fay and Charlie that he’s actually the Federal Agent the town’s been waiting for, and also that Baxter deputized him after he saved the sheriff. He and Charlie go to town to celebrate with the land owners.

At the same time, Sheriff Baxter returns to town, and Kincaid shoots Morgan for not killing the sheriff like he was paid to do. Before he dies, Morgan confesses to Baxter that he killed the previous sheriff and shot Baxter in the back on Kincaid’s orders.

By now, Kincaid has hightailed it out of town, and Saunders takes chase. After many bullets are exchanged from their horses, Saunders shoots Kincaid. Kincaid and his horse fall off a cliff and into the very water Kincaid was trying to horde. Ironically, the water that was so precious to Kincaid’s life, takes it from him, and he drowns. (The horse survives in case you were worried.)

Back in town, Saunders needs to ride into Yucca to send a wire, but Charlie first asks Saunders to tell Fay he likes her biscuits or something to cheer her up because she feels bad for ever doubting him.

Saunders does better than that. He tells Fay that he will be back for supper if she makes him about a 100 biscuits, and gives her the biggest kiss this side of the Pecos. Delighted, she runs into the house to make dinner as Saunders rides away.