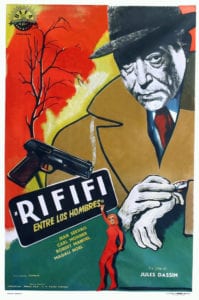 I won’t be able to add anything that hasn’t already been reviewed on this site about this fabulous French movie. It’s simply one-of-a-kind genius. On the cutting-edge level of “Citizen Kane”, “The Godfather”, and “Toy Story” as those once-in-a-generation genre-changers that every movie following wants to copy but never realizes the magic of the first time. When a movie is BANNED in countries around the globe (not censored but actually blocked from import) not because of violence or nudity, but because it is being used as a blueprint for real crime… One word: W-O-W.

The movie was filmed in the mid-1950s as gangster noire so the setting is perfectly gritty and distinctly Parisian of the era. When we aren’t seeing the setup for the heist or the heist itself, the story drags at times and has a touch of overacting. However, all of that is forgiven for the monumental originality in the hands of a master director. It’s a shame he was blacklisted in America. What a waste of true talent. I’m thankful the French saw the genius behind the lens.

This is one I’ve added to my collection on a recommendation from an article recently. I am soooo happy I bought it. It’s also a movie I have loaned out since my first viewing simply because I want to show friends how a historically awesome film sequence can not only be seen and enjoyed, but marvel at the stunning visuals playing out before their eyes. This movie is a feast for the eyes, ears and soul. I loved this movie and cannot rank it higher than 10. Please watch the heist sequence. You’ve never seen anything like it and never will again. 11 out of 10.