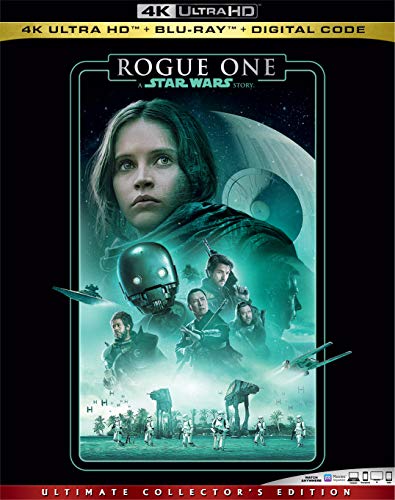 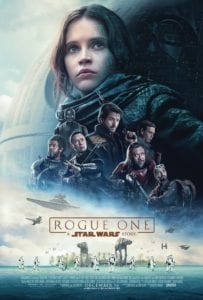 Rogue One begins on the planet Lah’mu where research scientist Galen Erso and his family are in hiding. However, an Imperial weapons developer named Orson Krennic arrives to force him to complete the Death Star’s superlaser array capable of destroying an entire planet. Krennic’s soldiers kill Galen’s wife, Lyra, but his daughter, Jyn, manages to escape to find Saw Gerrera who rescues the little girl.

Thirteen years pass, and we next find the cargo pilot Bodhi Rook looking to defect from the Empire. He takes a holographic message that Galen recorded with him to Gerrera on the desert moon of Jedha.

We then cut to the Rebel Alliance intelligence officer Cassian Andor who has learned about the Death Star from another agent at a trading outpost on the Ring of Kafrene. The Rebel Alliance leader, Mon Mothma, has Cassian free Jyn from an Imperial labor camp at Wobani so Jyn can help find and rescue her father. Mon Mothma also secretly orders Cassian to kill Galen instead of rescuing him.

Jyn reluctantly agrees to help, and she, Cassian, and his reprogrammed Imperial droid K-2SO travel to Jedha, but they must tread softly. The Empire is everywhere to be found on Jedha while they busily extract kyber crystals from it to power the Death Star.

Gerrera and his insurgents are also on the planet waging a gorilla warfare on the Imperials. Jyn is able to track Gerrera down with the help of a blind warrior named Chirrut Îmwe and his buddy, Baze Malbus. They find Gerrera holding Rook captive ever since he arrived with Galen’s message.

Gerrera shows Jyn the message. In it, Galen reveals he secretly built a vulnerability into the Death Star that can destroy it. He also reveals that anyone willing can go find the Death Star’s schematics in an Imperial data bank on the planet Scarif.

As this is going on, the Death Star rolls into Jedha’s orbit, and Krennic orders a low-powered test of its shiny new superweapon; destroying Jedha’s capital. Jyn and her her team escape the moon with Rook in tow, but Gerrera is tired of running, and he perishes with the city.

As they arrive to the facility though, Rebel bombers show up too, and attack the complex. Galen is wounded from it, and he dies in Jyn’s arms. She and her team then escape to a stolen Imperial cargo shuttle.

Out on the planet Mustafar, Krennic arrives to answer to Darth Vader for the attack on Eadu, and discuss the Death Star. Krennic takes the opportunity to try to get an audience with the Emperor, but Vader puts an end to that thought, and orders him back to work.

Back at the Rebel Alliance, Jyn proposes a plan to steal the Death Star’s plans using the Rebel fleet. The Alliance Council says no to that idea, but while Jyn finds herself frustrated with them, she continues on. She takes a small squad of Rebel volunteers on a suicide mission to get the plans themselves.

These Rebels arrive on Scarif using the stolen Imperial ship which Rook decides to call Rogue One. Jyn and Cassian disguise themselves, and enter the base with K-2SO while the rest of the team attacks the base to create a diversion. While this is going on, the Rebel fleet learns of their little raid via intercepted Imperial communications, and the fleet deploys to support them.

K-2SO sacrifices himself to give Jyn and Cassian time to retrieve the plans. Îmwe next dies while activating the master switch that allows them to communicate with the Rebel fleet. Malbus then falls in the battle, and a grenade kills Rook once he informs the Rebel fleet that it needs to deactivate the shield surrounding the planet to allow the transmission of the Death Star’s plans.

Jyn and Cassian do get the plans, but Krennic arrives to stop them. Cassian shoots and wounds Krennic, but he doesn’t die. Jyn transmits the plans to the Rebel’s command ship as the Death Star enters orbit above Scarif. Tarkin immediately uses it to destroy the base; killing Jyn, Cassian, and Krennic.

As the Rebel fleet prepares to jump to hyperspace with the stolen plans, Vader’s flagship arrives to retrieve them. He boards the command ship, and a battle ensues where the Rebels throw everything they have at Vader to slow him down.

The Rebels give the plans to Princess Leia aboard the Tantive IV. It immediately jumps to hyperspace; escaping Vader’s grasp. Princess Leia says these stolen plans will provide hope for the Rebellion as the film comes to an end.